Accessibility links
'Good As Gold': Utah's Pikus-Pace Wins Silver In Sochi : The Edge After coming out of a two-year retirement, Noelle Pikus-Pace wins a medal that long eluded her. At 31, eight years after she was first seen as an Olympics favorite, she celebrated with her two children in Sochi. 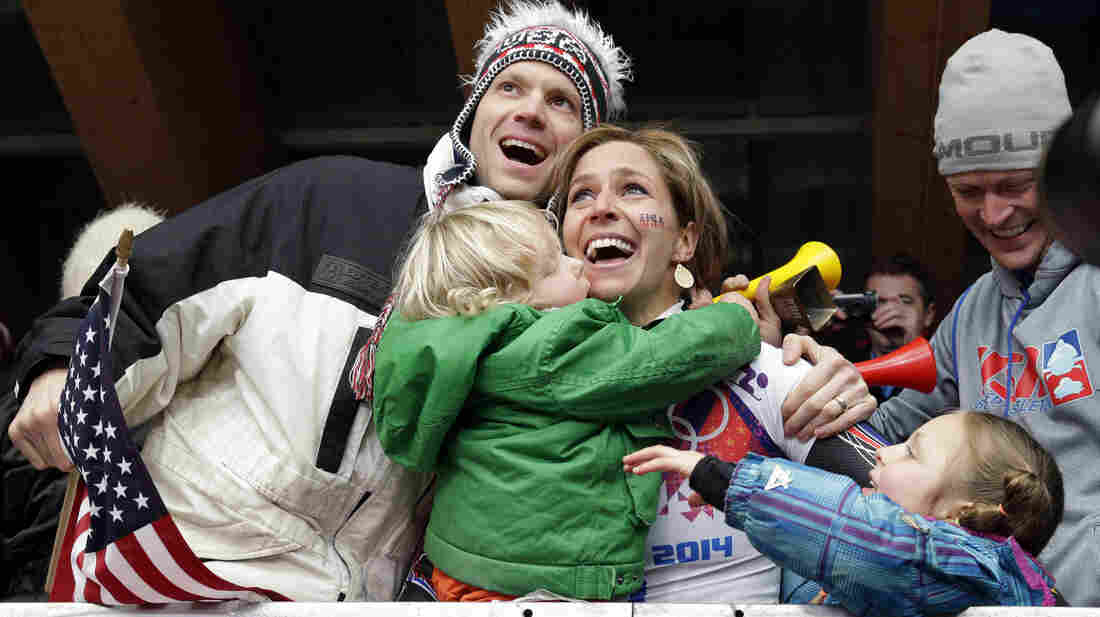 Noelle Pikus-Pace celebrates with friends and family, including her children, Traycen, left, and Lacee, after winning a silver medal in the women's skeleton at the 2014 Winter Olympics. Michael Sohn/AP hide caption 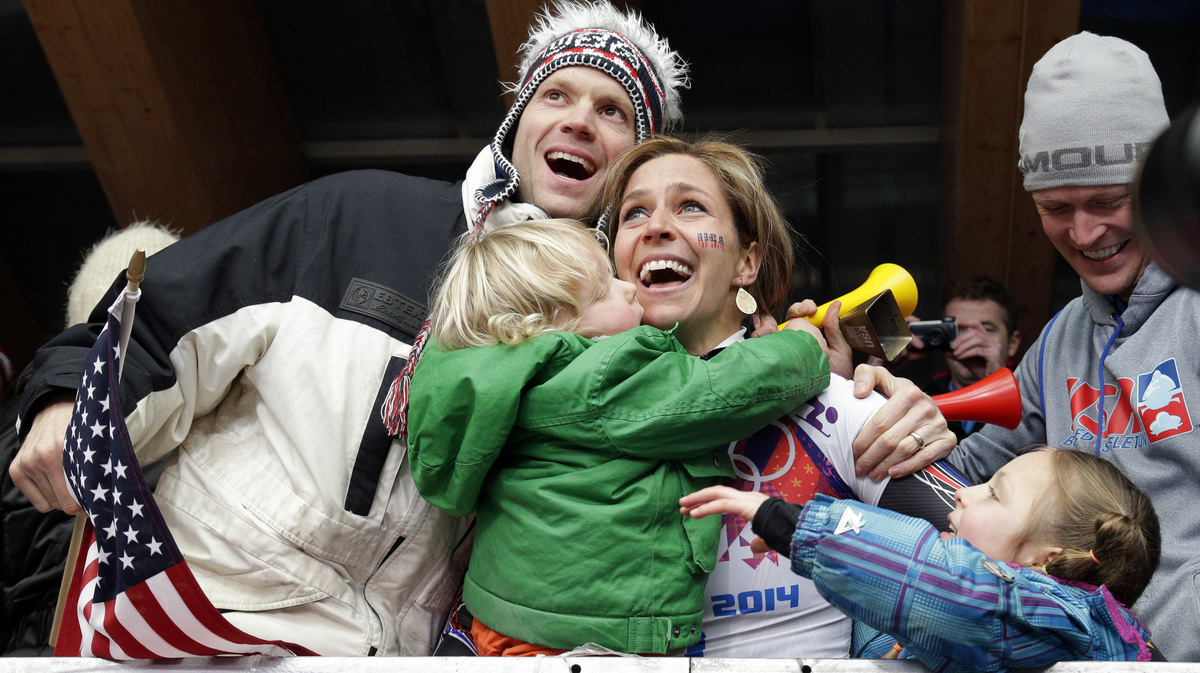 Noelle Pikus-Pace celebrates with friends and family, including her children, Traycen, left, and Lacee, after winning a silver medal in the women's skeleton at the 2014 Winter Olympics.

The path Noelle Pikus-Pace took to Sochi was far longer (eight years) and more tortuous (a broken leg, for starters) than the skeleton course at the Sanki Sliding Center at the Sochi Games. That could help explain how she tamed the course and finally won an Olympic medal, putting an exclamation point on a career that includes a world championship.

In Sochi, there was quite a welcoming party for Pikus-Pace after she clinched her medal. To celebrate, she crossed into the stands, where her husband and children had just watched her slide head-first on a sled down 19 curves made of ice and snow, covering nearly 1,500 yards in less than one minute.

Consider what Pikus-Pace, 31, has done in her search for Olympic glory: an errant bobsled broke her leg and ruined her chance to compete in the 2006 Turin Games. At the 2010 Vancouver Games, she placed fourth by one-tenth of a second. Then she retired and had a son. She also had a miscarriage in 2012, something she's spoken about as part of what inspired her to train again.

As the Salt Lake Tribune reports, Pikus-Pace and her husband raised thousands of dollars of support her training efforts — "including a $30,000 donation from a single donor in Provo who barely knew them."

"It was worth the wait," Pikus-Pace said in Sochi today. "It was worth every minute of it. Honestly, getting hit by the bobsled, people said, oh man, that's horrible. Getting fourth at the Olympics, they said ah, too bad. Then I had the miscarriage at 18 weeks, and many tears were shed. But if I hadn't gone through every single one of those things I could not be here today. And this is right where I want to be, and to have my family here, the love and support, it's just beyond words. Just beyond words."

Pikus-Pace finished second to Elizabeth Yarnold of Great Britian; Elena Nikitina of Russia won bronze. The three finished in the same top spots they held Thursday's first heat. Pikus-Pace won the silver medal while sliding on a sled her husband, Janson, designed and built (he works at a steel fabrication company).

"It is so surreal," Pikus-Pace said. "This is everything I could have imagined and more, just to have my family here with me and all of the love and support and cheers we've had, and all of the trials we've had to overcome to come to this moment. This is as good as gold."