Accessibility links
Does The U.S. Lead The Winter Olympics — Or Does Germany? : The Edge In keeping with a trend that began early in Sochi, as of Tuesday the U.S. had collected more bronze medals than any other country at the Winter Games, and a total of 20. Germany had won the most golds. Who was on top? That depends on whom you ask.

Does The U.S. Lead The Winter Olympics — Or Does Germany?

Does The U.S. Lead The Winter Olympics — Or Does Germany? 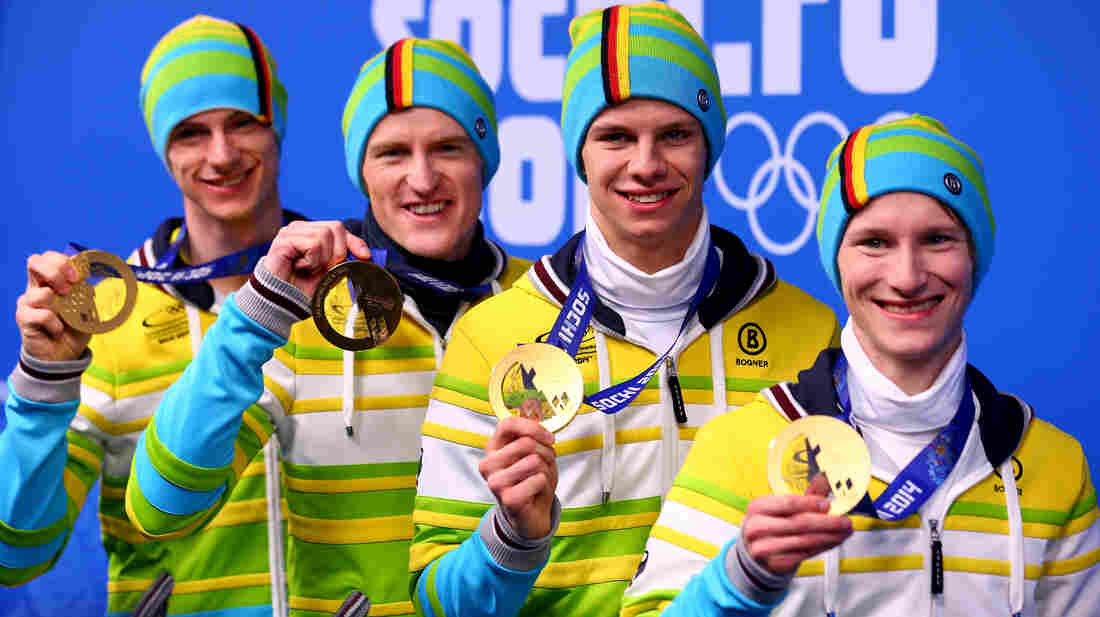 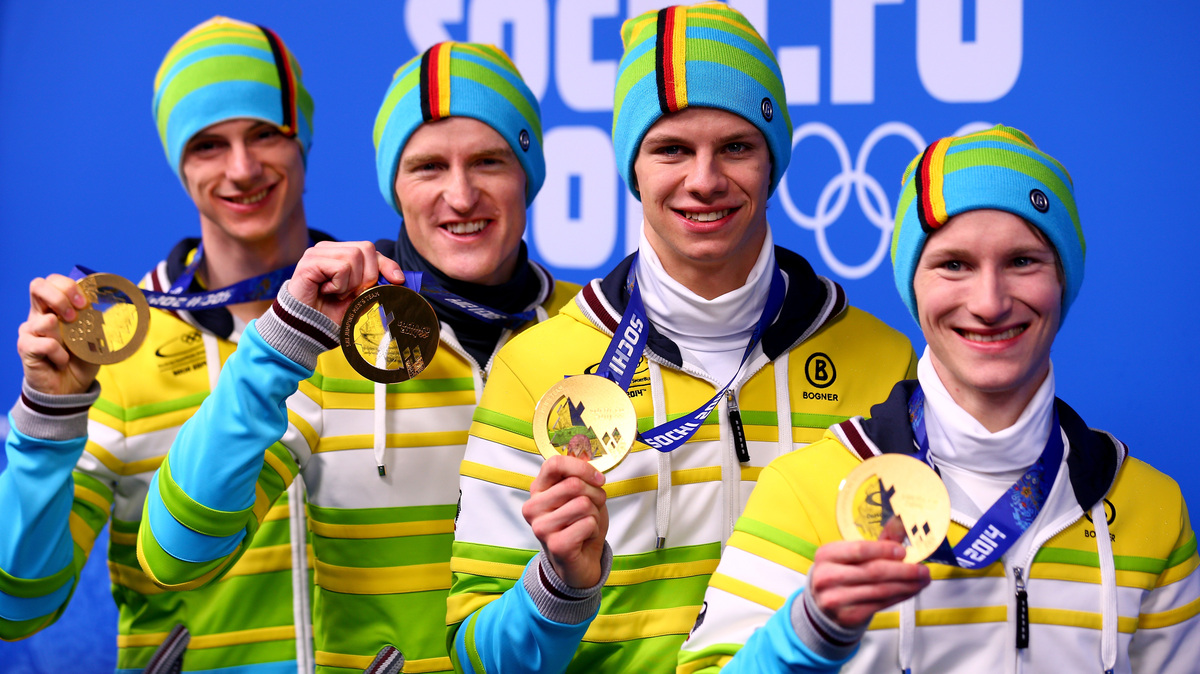 As of late Tuesday, with the final stretch of the Sochi Winter Games ahead, Germany had collected more gold medals than any other nation. Here, German gold medalists Severin Freund, Andreas Wellinger, Andreas Wank and Marinus Kraus celebrate their win in Team Ski Jumping.

The countries that send large contingents to the Olympics love to watch the "medal count" tally. But as of late Tuesday at the Sochi Winter Games, the countries with the most medals didn't have the most gold medals. That's why by some counts, Germany and Norway were leading the way, while the Netherlands, U.S. and Russia all trailed.

In keeping with a trend that began early in Sochi, the U.S. had collected more bronze medals than any other country at the Winter Games. The U.S. was tied with the Netherlands for most medals, with 20 apiece. The Americans' 10 bronze medals represented half the team's total.

We don't mean to suggest that an Olympic medal of any type is anything less than extraordinary. One of the most striking stories to emerge from these games was the U.S. skeleton silver medal that thrilled Noelle Pikus-Pace — and the bronze that painfully eluded Colorado's Katie Uhlaender in the same event.

But interesting patterns in the distribution of medals have taken shape as the Sochi Games enter their final days. The U.S. athletes have proven to be adept at either finishing third — or winning it all. In addition to the 10 bronze medals mentioned above, Americans had collected six gold medals in Sochi; they had finished second only four times.

The tally of medals won in the Sochi Games as of the end of the day on Tuesday put Germany at the top, with eight gold medals. In the total-medal count, the U.S. and the Netherlands shared the lead, with 20 medals overall. Sochi2014 hide caption

By late Tuesday, Germany's athletes had won eight golds — more than anyone — along with three silvers and four bronzes, giving it a similar pattern to America's — but slanting in the opposite direction. Norway followed with seven gold medals, along with four silver and seven bronze medals.

As for coming in second, Canadian athletes had done that more than any others in Sochi, with nine silver medals, including those won by skaters Tessa Virtue and Scott Moir in ice dancing Monday.

Of course, when you look at medal counts, it helps to remember that not everyone follows the same order.

On the U.S. Olympic Committee site, for instance, Team USA sat atop the standings with 20 total medals, followed by the Netherlands, also with 20. That was despite the stronger Dutch tally of six silver and eight bronze medals to go with six gold medals, the same as the U.S.

Germany didn't make the U.S. top four — but it led the tally on the Sochi 2014 site, on the strength of those eight gold medals.

If the current pattern holds, it would be similar to 2008, when China won the most gold medals, while the U.S. won the most medals overall. Organizers in both countries declared victory.

If you're thinking that the two ways of looking at the medal count get at something deeper in the Olympics — a clash of philosophies and values, perhaps — you're not alone. The games are meant to bring a sense of international goodwill, after all.

We looked for more insight into this topic at the question-and-answer site Quora. That's where someone asked during the London Games, "Why does the United States always report the overall country's medal standings via total medal count, while the rest of the world does it via Gold medal count?"

A fairly comprehensive answer cites the original Olympics charter, which prohibits organizers from making "any global ranking per country," as well as a statement from former IOC President Jacques Rogge in which he said, "I believe each country will highlight what suits it best."