Accessibility links
Oh No! When U.S. And Canada Face Off, 'Loser Keeps Bieber' : The Edge An electronic billboard in Illinois has jokingly raised the stakes for Friday's big hockey game. This may give fans another reason to belieb ... oops, we mean believe ... in their team.

Oh No! When U.S. And Canada Face Off, 'Loser Keeps Bieber'

Oh No! When U.S. And Canada Face Off, 'Loser Keeps Bieber' 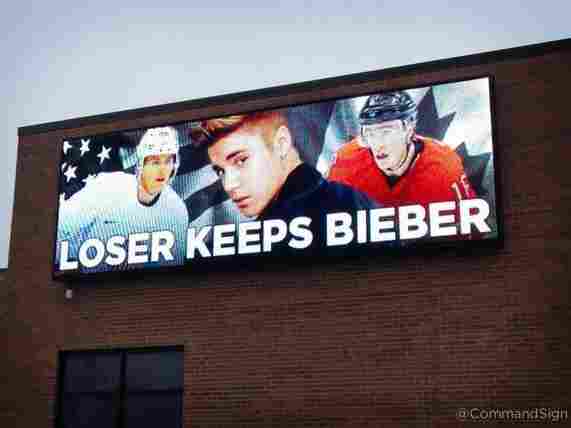 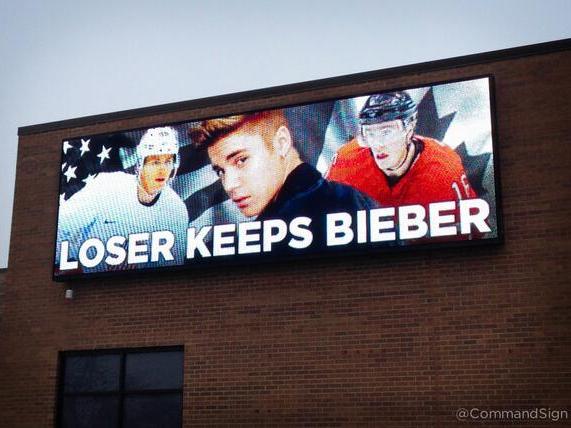 The stakes are high.

Sure, a chance to play in Sunday's gold medal game is at stake when the men's hockey teams from the U.S. and Canada face off Friday in Sochi. Game time: noon ET. NBC Sports Network is broadcasting it in the U.S.

But while Olympics glory is up for grabs, a shipping company in Skokie, Ill., has pushed the stakes even higher:

That would be Justin Bieber, of course, the nearly 20-year-old Canadian pop star who's become something of a bad boy in recent months with an arrest for allegedly driving while drunk and a charge of assaulting a limousine driver.

Judging from Command Transportation's Twitter page, the company likes to use its billboard to poke fun at politicians, celebrities, athletes and sports teams that Chicago fans love to hate. Its newest message, though, has really hit home with many: #LoserKeepsBieber has been trending on Twitter.

Now, as for the big game at noon:

-- ESPN.com says Team USA is a slight favorite because the Americans "are playing the best hockey of any of the four remaining teams, and have done so against the best competition." Sweden and Finland are facing off in the other semi-final game.

-- The CBC seems to agree. It has posted a column by Hockey News senior writer Mike Brophy, who says that "if Team Canada is to repeat as gold medalists in men's hockey, it will have to get past the best team in the tournament thus far from the United States."

Will Team USA triumph? Will Beliebers see their hero sent back home to the Great White North? We'll keep an eye on the news from Sochi.