When we asked American members of the NPR community who are living in other countries to let us in on their plans for Thanksgiving 2013, we received hundreds and hundreds of responses.

Some expatriates say they plan to trot out the turkey and dressing and Mama Stamberg's cranberry relish. Others say they don't plan to celebrate one whit. Many folks sent us stories and photos of past Thanksgivings spent abroad.

Here are a few examples: 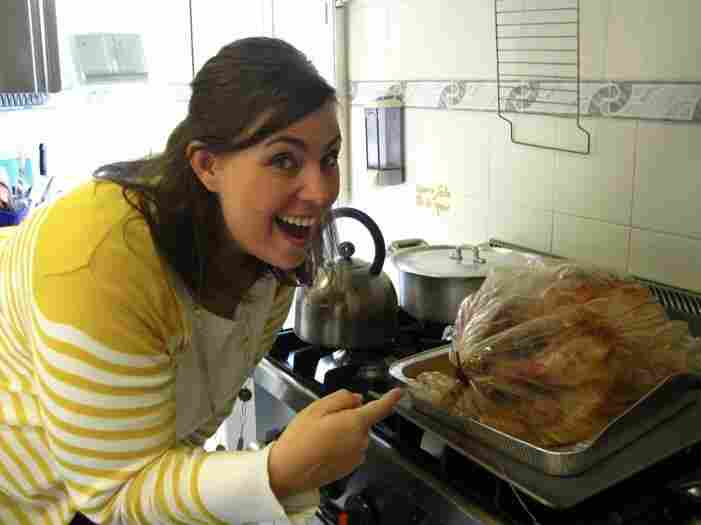 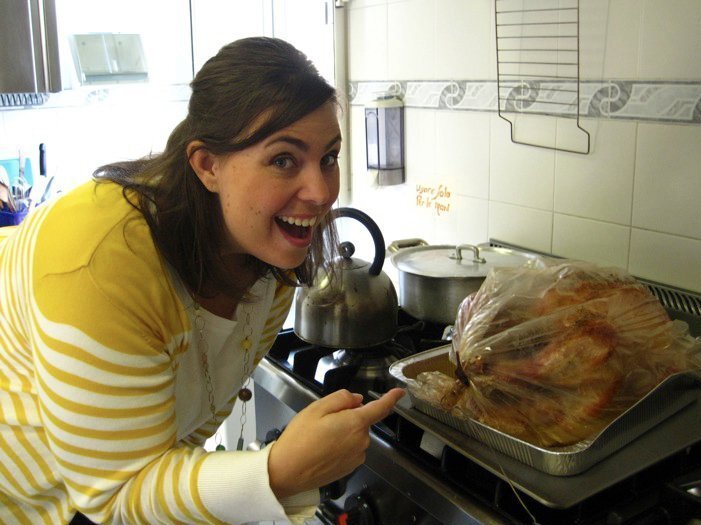 In 2009, recalls Luis Alba Navarro, "I was living and teaching in Prague, Czech Republic. My sister, another teacher, and I split two whole roast ducks at a nice local pub, and we washed it all down with several liters of the best beer on earth. I remember it fondly."

Cooking a Thanksgiving feast in Italy "for a group of hungry and homesick American students requires imagination," says Kristen Snyder, who oversees an overseas program in Rome for Pennsylvania-based Geneva College. "There's not a Butterball turkey in sight, so you head to the butcher to order it two weeks beforehand. Later, as you're hauling your groceries home, you're thinking of how you can substitute Greek yogurt for sour cream and what to do without brown sugar."

The peripatetic Kate Brantley says that after "seven years in five cities in two foreign countries. I feel less American every year. But one tradition I can't let go of is Thanksgiving."

Her first Thanksgiving abroad, she says, was spent in Metz, France. "I dragged my Spanish boyfriend Carlos to France's equivalent of Wal-Mart. I had to buy an oven for the occasion. Waiting for the bus in the rain, arms full of groceries, Carlos was so patient and valiant that I told him I loved him for the first time." 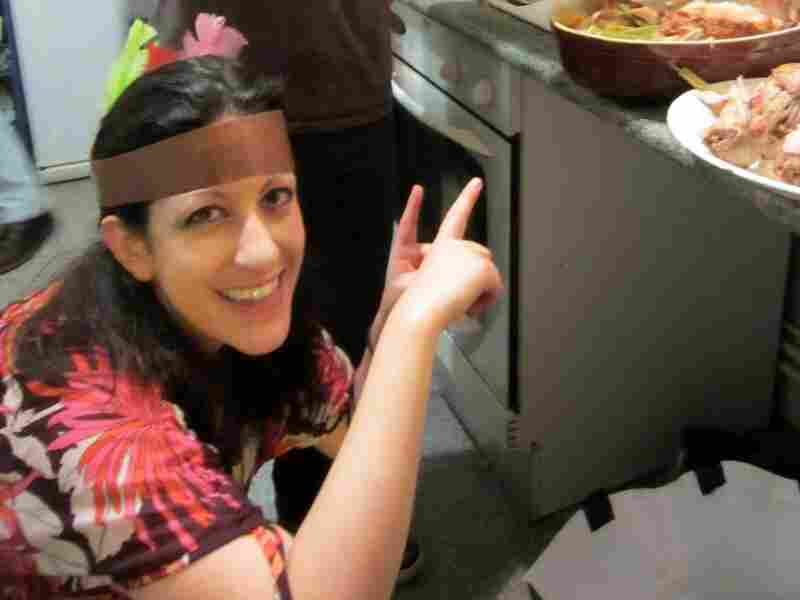 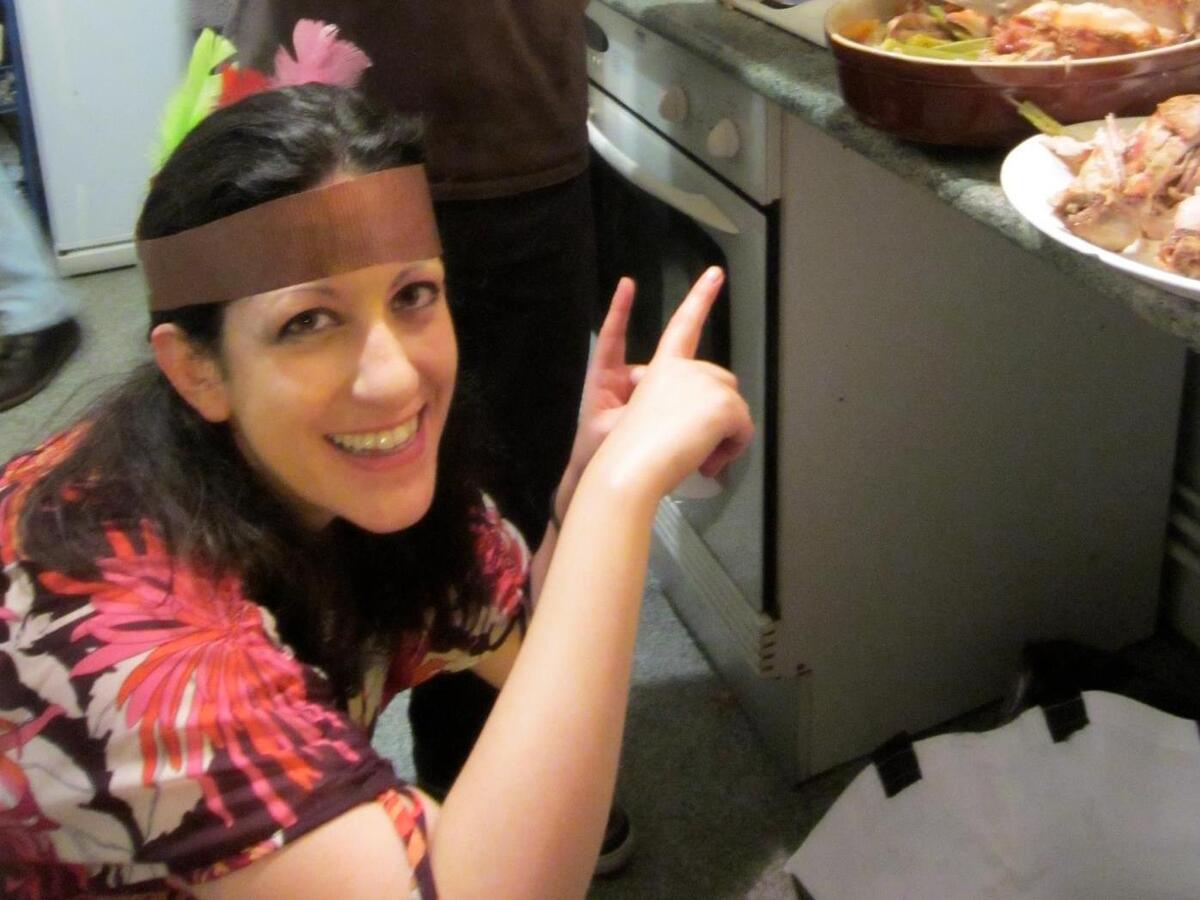 Her apartment was so small, she says, "we celebrated in the dining hall of a university residence with plates of turkey tetrazzini."

From Uganda, Robin Wheatfall tells us: "Thanksgiving is so depressing. This will be our third Thanksgiving abroad. We are at the Equator. No change in seasons at all.

The first year away, Robin says, "we invited some newly transplanted Americans, a mom and her twins, to our place for Thanksgiving. We had to pay $200 for a turkey here because turkey is not a normal food Ugandans eat. Her husband was in Kinshasa, Congo and could not be with his family.

"The second Thanksgiving we were invited to some American Embassy friends' house. They had their kids take off the day from school and all the usual suspect dishes were present. It felt much less depressing and lonely being with other Americans."

"We are considering keeping the girls home from school this Thanksgiving, but as we do not work for the US Embassy, the opportunity to be involved in any of their functions does not exist. The friends who invited us for Thanksgiving last year have moved away. So we will most likely have a very low key family Thanksgiving here."

A week before the big day, "Ron and I were on a wild chompipe chase — a wild turkey chase," Debbie writes. "I wanted a turkey for Thanksgiving, even though we have no oven to cook it. Necessity is the mother of invention, so I had a plan to roast it in a big hole that we would dig in the sand on our beach."

Ron wanted no part of the scheme, Debbie recalls, "and refused to bother with such a massive production." Debbie wasn't sure what to serve. "A day before Thanksgiving, Francisco — my dedicated English student and now a good friend — came to our rescue."

The centerpiece of their first island Thanksgiving dinner was a 5-plus pound guapote fish that Francisco's uncle had caught in his net.

Kate Williams remembers a Thanksgiving surprise on another island — in Taiwan — when local folks served her chicken feet.

And Christopher Pavonetti tells of the time he celebrated solo in Madrid: "I went to McDonald's. It was the most American thing that I could think of doing."

We hope American expatriates will share photos of Thanksgiving celebrations and tables and gatherings from around the world. Please send them to us on Thanksgiving Day — and over the long holiday weekend --at protojournalist@npr.org or post them using the hashtag #nprexpat

The Protojournalist is an experiment in reporting. Abstract. Concrete. @NPRtpj.