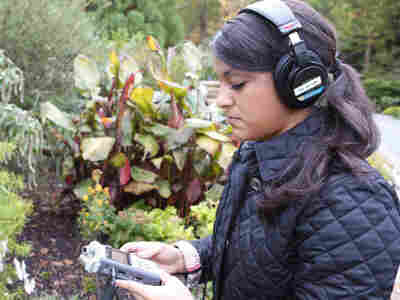 If you don't know the meaning of a word, says Mary Caton Lingold, you can look it up in the dictionary, but if you don't know what a particular sound sounds like, where do you go? (Besides NPR, of course.)

For instance: What does tobacco harvesting sound like? Or someone clogging? Or a shotgun?

The idea for the Sonic Dictionary came to Mary Caton — a doctoral student at Duke University — when she was teaching a writing course about music genres. She discovered that many of her students had trouble identifying musical sounds correctly. For instance, a student writing about reggae might not know an electric bass from an electric guitar. And they had no credible sound-based reference source to turn to.

She also taught a course called Sounds of the South, so she invited her students in that class — and others — to seed the aural library. So far she has gathered more than 170 sounds — including peanut shelling, corn shucking and banjo picking.

"I was surprised," Mary Caton says, "to find how many southern sounds are not actually unique to the south. For example, one of my students found a recording of sugarcane harvesting to contribute to the sonic dictionary. It was made in Vietnam. She was worried that it wouldn't count for the project, but I think it's great because it challenges us to question whether or not sounds are truly indigenous to a particular region."

For now, Mary Caton is working with other academics to build her dictionary. Eventually, she hopes to open up the project to public contributions.

The Protojournalist is an experiment in reporting. Abstract. Concrete. @NPRtpj