Accessibility links
Bewildered By Bilderberg : The Protojournalist By creating a Google Alert for a mysterious meeting of the world's power brokers, we came to know that there is a lot we don't know. 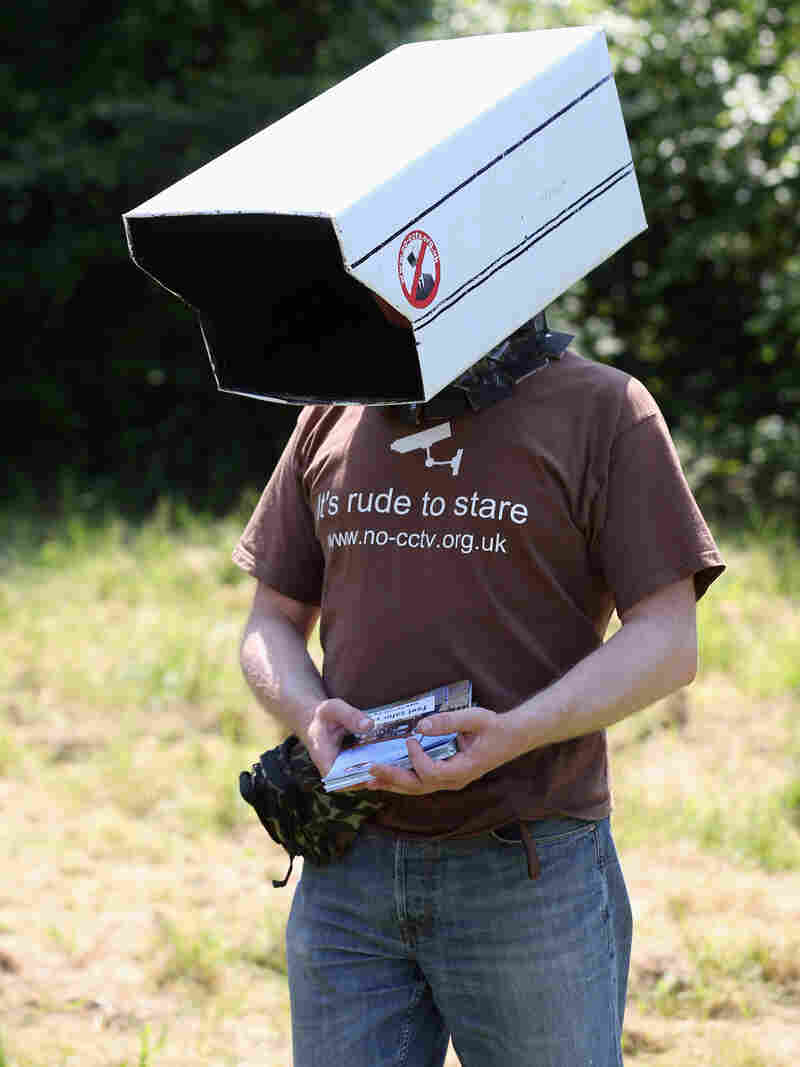 An anti-surveillance protester stands outside the Bilderberg conference last year in Watford, England. This year the conference may be in Denmark. Oli Scarff/Getty Images hide caption 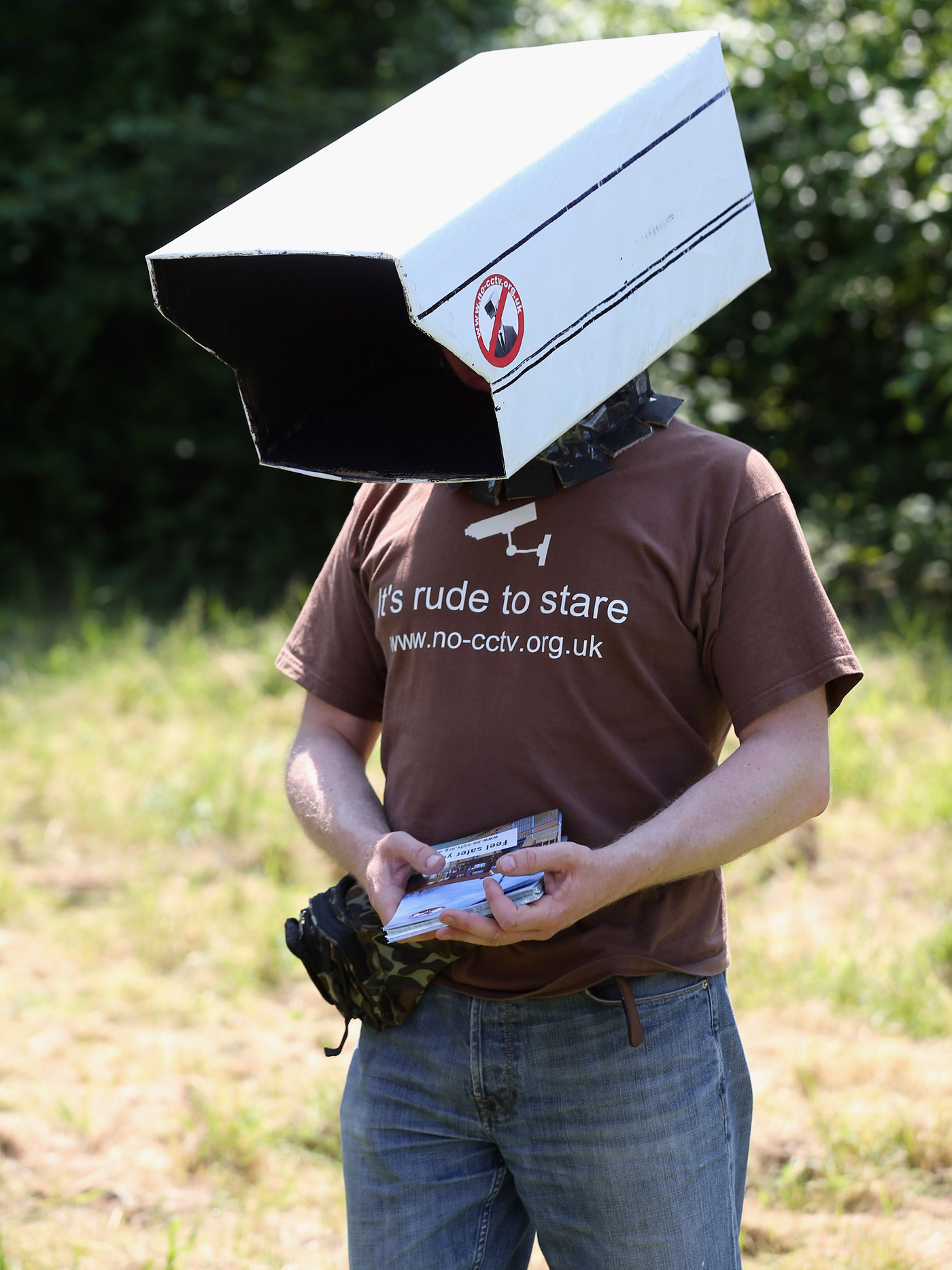 An anti-surveillance protester stands outside the Bilderberg conference last year in Watford, England. This year the conference may be in Denmark.

The Bilderberg annual conference is convening at the end of May in Denmark. Or so it's reported.

For folks who have never heard of Bilderberg, it's an invitation-only confab of high-powered people who jawbone about world issues. Its mission, according to its official website, is at once simple and complex: "to foster dialogue between Europe and North America."

That time is now.

The 2014 Bilderberg convention, some websites will tell you, may decide to devalue the dollar or plant a tracking device in every car or mobilize military forces somewhere in the world. And attendees may not be meeting in Denmark after all.

Journalists are not allowed to report on the proceedings. Most of the goings-on during the three-day do are top secret. The result: deep mistrust on the part of many observers.

So here is the problem. On one hand, Bilderberg declares that its closed-door policy allows high-powered participants to speak candidly at the conference. On the other hand, that adherence to secrecy does not reassure — or span the gap with — the world at large.

Call it the Bilderberg Bridge Problem.

Earlier in May we set up a Google Alert for the term "Bilderberg" to learn random and serendipitous things about the group. (We call this infogathering method Google Frecking.) Our mail queue became a mass of accusations, musings and maledictions.

As a public service, we have tried to separate the wheat from the chaff so we can pass along 7 Things That Google Frecking Showed Us About Bilderberg:

1) 60th year. In late May 1954, the first gathering was held at the Hotel De Bilderberg in Oosterbeek, Netherlands. Muckety-mucks from various realms — economic, political, social — were invited "to hold informal discussions to help create a better understanding of the complex forces and major trends affecting Western nations." These days The New York Times refers to the attendees as "masters of the universe." The BBC asks: "What is the Bilderberg group: a private discussion club or a sinister global conspiracy?"

2) Proceedings are hush-hush. Reporters are not allowed. According to the rules, "participants are free to use the information received, but neither the identity nor the affiliation of the speaker(s) nor of any other participant may be revealed." In a Sky News interview, British Parliament member Michael Meacher asks: "Why can't we have transparency over the Bilderberg conference?" He draws a sharp distinction between the open-door policies of the yearly World Economic Forum in Davos, Switzerland, and the sealed-lip tack of Bilderberg.

3) People you know. The steering committee boasts lots of monied and influential people from Europe and North America, including Klaus Kleinfeld, head of Alcoa; Kevin Warsh of the Hoover Institution; and Jessica Tuchman Mathews, chairman of the Carnegie Endowment for International Peace. The BBC calls it "possibly the most influential discussion network in the world." Reportedly Jeff Bezos of Amazon and Eric Schmidt of Google were on last year's guest list.

4) Origins of suspicions. When any illustrious group meets — behind guarded gates — imaginations reel and tongues inevitably wag. From the beginning, the Bilderberg group has conjured up notions of conspiracies. Over the years Bilderberg was reportedly privy to extraterrestrial contact and responsible for orchestrating what syndicated broadcaster Alex Jones refers to as the "fake Al Qaida spring." Across the Internet, suspicious watchers spend countless hours deconstructing Bilderberg. There's even a discussion on eBay.

5) It can be parsimonious. When the Bilderberg conference was staged in Hertfordshire, England, last year, more than 2,000 protesters and gawkers showed up and, consequently, taxpayers were billed half a million pounds for the group's security. The Bilderberg conference "has become a circus — as any furtive congregation of powerful politicians and plutocrats is rather noteworthy," according to Mike Wright in the Watford Observer. "The argument about whether the money should come from Hertfordshire Constabulary or the Home Office budget is pointless. The matter should never have got to this point as the Bilderberg Group should have paid the whole cost."

6) Bilderberg today. Traditionally, says Charlie Skelton of the Guardian on a Press for Truth video, "it's been a conspiracy theory to talk about it. Which I think has been properly exploded this year ... as an organization they are finally realizing they have to address the main stream media." Clouded in secrecy for decades, Bilderberg may be opening up a little in the Internet age. It has an official website now with a FAQ page and a list of steering committee members.

7) It still has a ways to go ... on the transparency front. At one point, our Google Frecking led us to the official site and the FAQ. It told us that the convention "is closed to reporting journalists in order to encourage the highest level of openness and dialogue" and "there is no attendance fee." It also listed a media contact.

So NPR emailed some questions to Bilderberg. Here are a couple, and the replies:

* Is the Bilderberg group making an effort these days to be more open and transparent than in the past?

That is for the public to decide — as the conference is a private meeting, there will always be limits to the level of detail we can share with third parties. However, we do our best to increase the level of transparency and so, hopefully, we are managing to eradicate some of the "mystery" surrounding the Bilderberg meetings.

* Have you thought about adding a page to your website that addresses the various conspiracy theories attributed to the Bilderberg gatherings?

This is the first time we have come across this suggestion. We think it would be neither appropriate nor in line with our objectives.

When NPR approached Bilderberg's media contact with the above questions, the answers came back relatively quickly and very politely. With a postscript that included: "Please refer to me as 'a spokesperson for the Bilderberg conference' and not by my name — thank you."