Accessibility links
The Runner-Up Religions Of America : The Protojournalist One nation under God, with many different religious traditions.

The Runner-Up Religions Of America

The Runner-Up Religions Of America 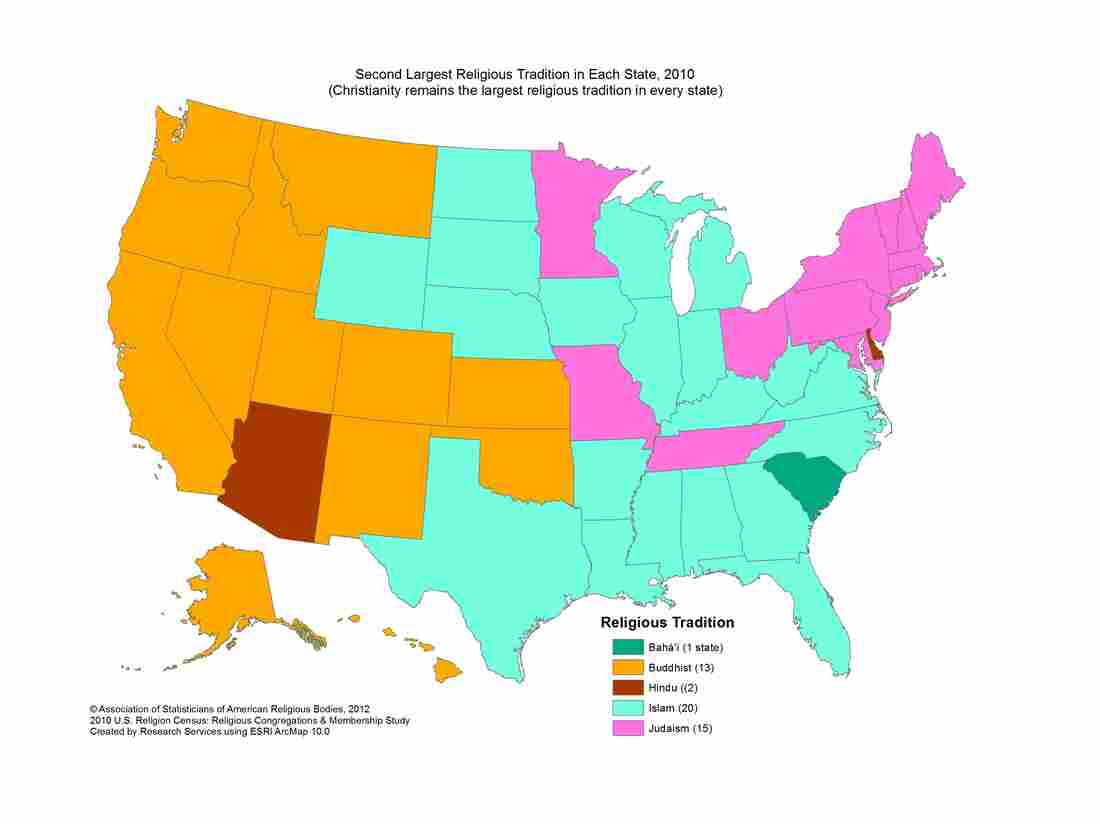 Click here to view full size.
Courtesy of the ASARB

Glance at the map above, Second Largest Religious Tradition in Each State 2010, and you will see that Buddhism (orange), Judaism (pink) and Islam (blue) are the runner-up religions across the country.

No surprises there. But can you believe that Hindu (dark orange) is the No. 2 tradition in Arizona and Delaware, and that Baha'i (green) ranks second in South Carolina?

The map — created by the Association of Statisticians of American Religious Bodies and published recently in The Washington Post — "looks very odd to me," says Hillary Kaell. She is a professor at Concordia University in Montreal who specializes in North American Christianity. "These numbers, although they look impressive when laid out in the map, represent a very tiny fraction of the population in any of the states listed."

True that. Christianity is the Number One religious tradition across the board. A 2012 Gallup poll showed that 77 percent of Americans identify as Christians. But a deeper look into the stories behind the map's data reveal a bit more about a nation in flux.

Faith And Race In South Carolina

Louis E. Venters, an assistant professor of history at Francis Marion University and author of the forthcoming book Most Great Reconstruction: The Baha'i Faith and Interracial Community in Jim Crow South Carolina, makes an observation similar to Hillary's. "To put the map in context," he says, "let's acknowledge at the outset that it doesn't take very much to be the second-largest religion in South Carolina. It is a solidly Christian, and particularly Protestant, state, and all the minority religions combined comprise only a tiny fraction of the population."

But, Louis says, "whatever the size of the Baha'i faith in South Carolina — relative to other minority religions — I think its history is quite compelling and worthy of attention in itself."

From as far back as 1910, Louis says, "the Baha'is were virtually unique in Jim Crow South Carolina in attempting to create an interracial religious community — for which they suffered harassment and violence."

By the 1960s, he says, there were local Baha'i organizations in many towns in north Georgia and South Carolina. The tradition spread. "The Louis G. Gregory Baha'i Institute in Georgetown County, founded in 1972 and named for the black Charleston native who first brought the religion to South Carolina," says Louis, "became a cultural and educational hub for the South Carolina movement. And Radio Baha'i WLGI — broadcasting from the same site beginning in 1985 — has brought its teachings and ethos to a large section of the state."

The story of Louis Gregory and his wife, Louisa, is chronicled by PBS in Interracial Relationships that Changed History. In 2003, the Baha'i community designated Louis Gregory's childhood home as a museum.

Louis Venters says, "The Baha'i community today is relatively well-known in South Carolina for its long record of interracialism, strong attention to community service and the education of children and youth of all backgrounds, and contributions to interfaith dialogue."

He adds: "Although the map may have come as a surprise to those who aren't familiar with this history, to me — and I think to most Baha'is in South Carolina — it makes pretty good sense. And if it brings to light one of the South's oldest and most successful experiments in interracial community-building, so much the better."

Hindus In The Desert

In Delaware and Arizona, Hindu is the runner-up religious tradition.

Drawn to Delaware "by jobs in the computer and medical fields," The Associated Press reports, "Asian Indians have become one of Delaware's fastest-growing communities." Thousands of Hindus gather to worship at the Hindu temple in Hockessin, near Wilmington.

The story is somewhat the same in Arizona. "I believe that employment in the information technology and other technology and innovation fields is probably one of the contributing factors to ongoing growth of the Hindu community in Arizona," says Caleb Simmons, assistant professor of religion at the University of Arizona. "India trains many of the world's software engineers, and many of those engineers are finding employment in American and international companies. Many of them are Hindus, and as they immigrate they also import their religious traditions."

Couple that trend "with the second and third generations of Hindu Indian Americans who had settled here after the Asian Immigration Act of 1965," Caleb says, "and you have an emerging population of Hindu Americans everywhere, especially large metropolitan areas like the Phoenix area."

He adds: "This poll might also speak to the lack of religious diversity in Arizona, since I believe Hindus still only make up around 2 percent of the overall population of Arizona residents."