Accessibility links
Cosmic Query: What Color Is Marty McFly's Vest? : The Protojournalist Finally, a definitive answer to a pop-cult conundrum. 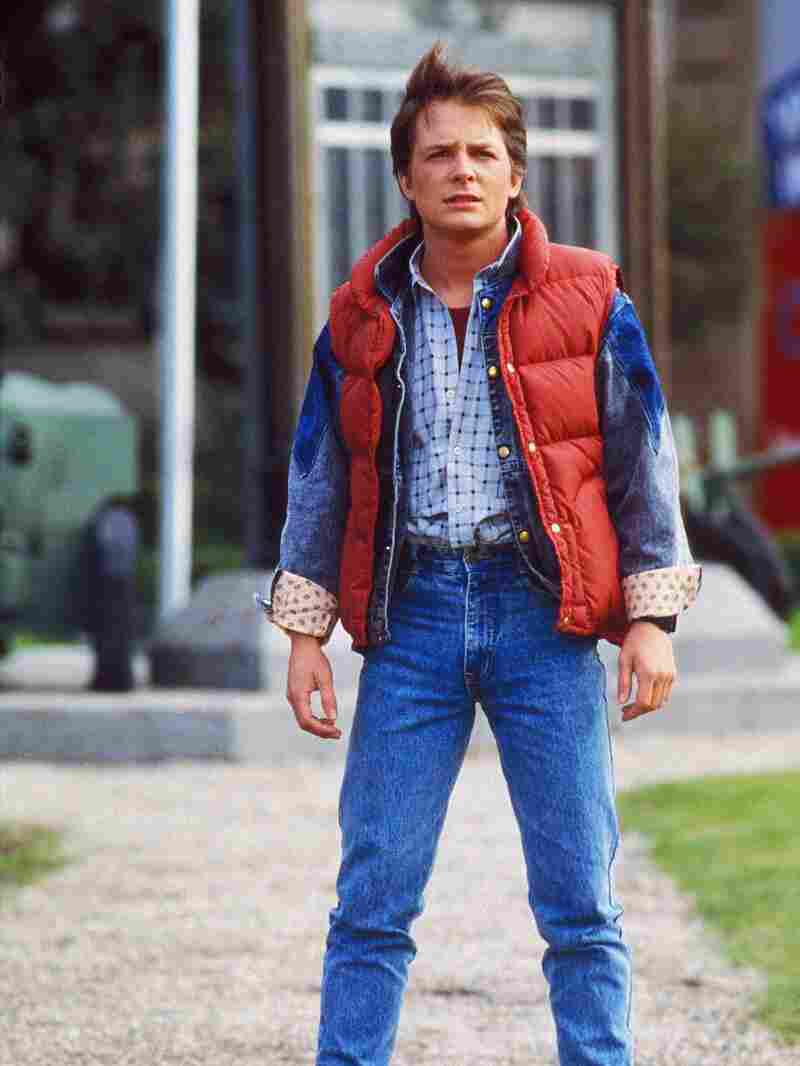 Michael J. Fox and his vest in the 1985 movie Back to the Future. Amblin/Universal/The Kobal Collection hide caption 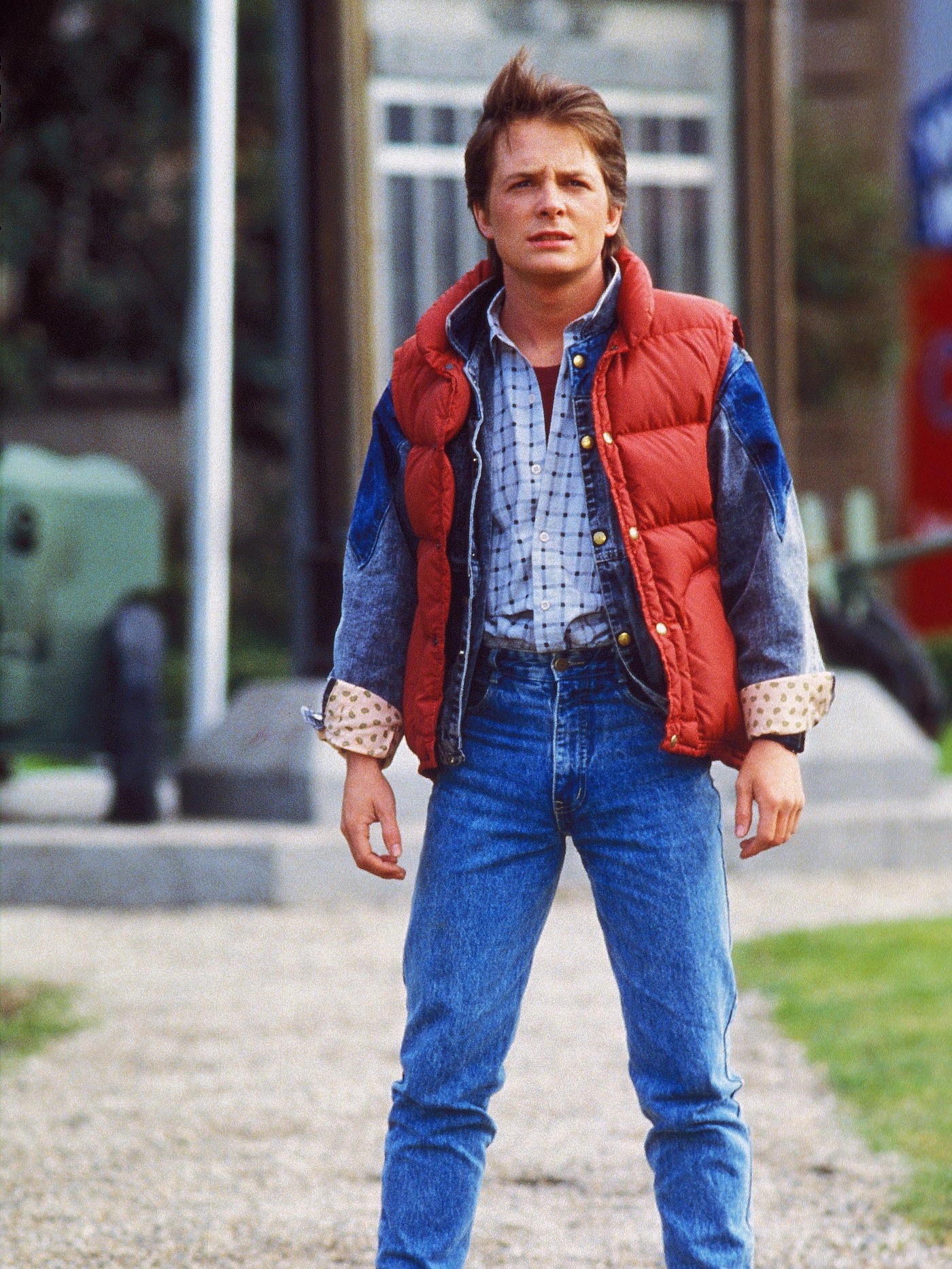 Michael J. Fox and his vest in the 1985 movie Back to the Future.

Also understand that those of us who engaged in this debate realize we have got some time and brain cells to spare.

But recently, a group of us in Northwestern University's student newsroom have been pondering a pop-cult puzzle: "Is Marty McFly's vest in Back to the Future red or orange?"

'What Are You Looking At?'

What started out as a simple and hilarious jab at a co-worker's red puffer vest has turned into a good-natured debate. The co-worker had said something snarky, prompting me to call out, "All right, Marty McFly," as he sauntered past my desk.

I was referring to the Michael J. Fox time-traveling character in the iconic 1985 movie Back to the Future.

I know this isn't the most crucial debate in the universe, or even the world of geek culture. If I had to rank its value, it would fall somewhere just above the petty "Who would win in a fight — Pirate or Ninja?" debate and well below the classic "Han shot first" battle cry.

But in our Color of Vest Quest, the Red and Orange camps formed immediately and were about equal in number. Each side was able to pull up supporting photos — in various shades of red and orange — to buttress its recollections.

And this line in the film became the rope in the tug of war:

Although the orange supporters cheered their success upon rehearing the line, I pointed out that life preservers come in orange, red and yellow — leaving the question very much open for debate.

Because of the uncertainty, I still insisted Marty's vest is red. My co-worker, Jon, insisted it's orange.

And so, to be able to take the debate to the next level, I went back to the future myself.

At first, I figured some Googling would probably solve everything once and for all. My first stop was naturally the Back to the Future wiki, Futurepedia. The site has an entire page dedicated to Marty's down vest. It cavalierly states the vest is red: no qualifiers, no equivocation.

I felt the shivers of vindication run down my spine. (Maybe I needed some kind of warm garment.)

But then I made the mistake of Googling further. The question pops up here and there. From WikiAnswers (orange) to the Dallas Observer (reddish-orange), answers covered the spectrum. Well, the red-to-orange part anyway.

A co-worker and I scoured Facebook, Reddit and other potential sources. The few answers we got were far from decisive.

No site reached anything remotely close to an answer, but one GameFAQs poster came out with this nugget of wisdom: "It's red but the hue and age of the vest means it's easy to remember it as orange."

'If You Put Your Mind To It'

If at first your lazy methods don't succeed, try something nerdier — like averaging color samples.

I did what any person with Adobe Photoshop would do: I grabbed five representative photos, found the vest's average pixel color in each, and then averaged the five samples.

Then I looked up the hex code on the Internet.

While a glance at the CMYK values made me feel a little iffy — that yellow value threatens to tip the scales — the color description made me grin.

I really wanted to call it a day and celebrate victory, but I couldn't forsake my journalistic responsibilities. My duty is to find the truth, and to do so means consulting every necessary resource.

Who better than the woman behind the down vest, Deborah Lynn Scott, the movie's costume designer.

It never hurts to ask, right?

Jon subscribed to IMDb Pro for about five minutes and got her agent's contact info. I gave the office a ring and spoke with her agent's assistant, who told me to email the question. Within less than an hour, I received my answer:

"Deb confirms that the vest is orange, and as is referenced in the dialogue of the film, it alludes to a life-preserver."

Damn it! I am not one to admit defeat easily. But, like Baby Houseman's father in Dirty Dancing, when I'm wrong, I say I'm wrong. You win, Jon. The bloody thing is orange.

Now what color is Baby's father's windbreaker in her apology scene? Is it gray, or is it green?

Laura Bradley is a student at Northwestern University's Medill School of Journalism. You can follow her @lpbradley.