Accessibility links
Is Hello Kitty A Cat Or A Girl? : The Protojournalist The pop-cult icon may not be, as it turns out, a cat that looks like a girl, but a girl who looks like a cat. 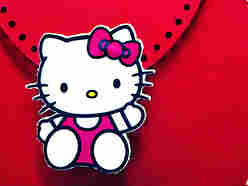 If you name something "Hello Kitty," and proceed to give it cat ears and cat whisker-looking things, then don't be surprised if people think you have made a cat.

I was surprised when I read this story in the LAist: Christine Yano, an anthropologist from the University of Hawaii, is curating an upcoming exhibit at the Japanese American National Museum in Los Angeles in honor of Hello Kitty's 40th anniversary. While writing the script for the exhibit, she referred to Hello Kitty as a "cat," and — as reported in the Los Angeles Times — was firmly corrected by Sanrio, the character's manufacturer:

Hmmm. Reporters from Kotaku and RocketNews24 are getting a different response from Sanrio. When you read the official backstory of Hello Kitty, there seems to be some fuzziness. Kitty is British and loves apple pie. She is the daughter of George and Mary White. She is a Scorpio and has a twin sister. That could be an anthropomorphized cat, right?

So why would the manufacturer say Hello Kitty is really a girl?

There are lots of cats that walk on two legs! Sylvester, Garfield, Snagglepuss, Felix. No one mistakes these cats for humans. Granted, they are drawn more like cats than Hello Kitty, but just because she is not depicted on all fours does not make her human. Most of the time she is just a floating head anyway — on pillows, purses, press-on nails and everything else.

The Cat Is Out Of The Bag

Hello Kitty is a huge business. In fact, when it comes to global icons, Hello Kitty is in its own cat-egory. (Let me rephrase that.)

Sanrio reports that the bewhiskered Kitty brings in more than $1 billion in annual sales, with more than 50,000 branded items on the shelves in more than 70 countries. The product list is staggering. Hello Kitty's little face is on everything from hair clips to hand warmers to coat hangers.

Last year a Taiwan-based airline introduced a Hello Kitty-themed Boeing 777 with flights to and from the United States.

Sanrio is planning for the 2014 Hello Kitty Con, a multiday fanfest in Los Angeles at the end of October, featuring flower arranging, cake decorating and scrapbooking.

If we learn in the near future that Hello Kitty is human, well ...

For me, it's personal. I was obsessed with Hello Kitty in the sixth grade, and when I first saw her, I thought she was a cat.

I did not think, "Here is a little girl." No. I thought, "This is the cutest cat eveeerrrrrrrrr."

If Sanrio's goal, as curator Christine Yano suggests, is to present Hello Kitty's feline appearance as "a kind of abstraction," then why has Sanrio given us a list of solid details about Kitty's life? Those details have been out there for a while, but now, with this news, the disenchantment seems so real.

But this is not about reality. This is about surreality. Who would have thought that a cute little whiskery thing would make people smile all over the world?

I want to believe that Hello Kitty is a cat. So that's what I am going to believe. But I will never look at whatever it is the same way again.