Accessibility links
The Yarmulke Comes To 3-D Printing : The Protojournalist Using math and imagination, a college professor creates a new kind of kippah.

The Yarmulke Comes To 3-D Printing

The Yarmulke Comes To 3-D Printing 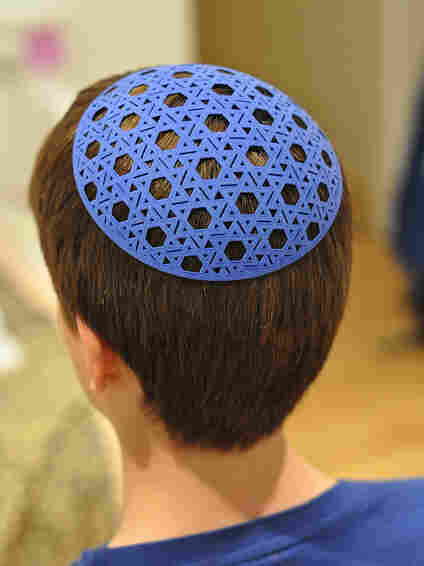 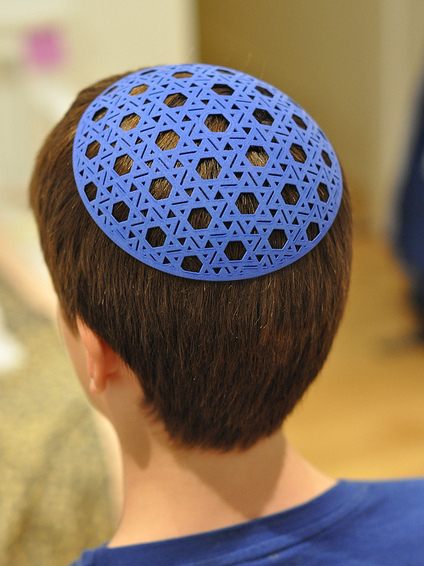 A yarmulke produced from a 3-D printer.

What do you get when you combine a computer science background with Judaica? A 3-D printed kippah.

Craig Kaplan, an associate professor in the Computer Graphics Lab at the University of Waterloo in Ontario, Canada, rarely leaves the house without his Panama hat in warmer weather.

He wanted to design a 3-D printed version of the traditional hat, but he decided to start with an easier shape to reproduce: a yarmulke, or kippah — a plate-shaped head covering worn by observant Jews.

"After that," he says, "it was just a matter of working through the mathematics — programming and 3-D modeling to make these kippah designs a reality."

Using a 3-D printer, the kippahs were created directly from a computer model. Craig sent the model he created to Shapeways, an online service that manufactured the kippahs in "laser-sintered nylon."

The special material "starts out as a powder of little plastic particles," Craig explains. "Layer by layer, a laser is used to heat up the particles until they fuse together into a solid mass. It's a pretty amazing technology."

You can't help but wonder: Is this kosher? Craig consulted two different rabbis regarding the rules concerning the covering of the head in Judaism. The main requirement, he was told, is that a kippah be a physical object that's clearly discernible as a head covering. There are no restrictions on material or shape.

One rabbi told him that "even a removable hairpiece can serve as a kippah," Craig says.

From a design point of view, he says, 3-D printing has the advantage of producing a nearly infinite variety of interesting geometric designs in a way that might not be possible with, say, crochet.

And because his kippahs have more holes in them than your average head covering, he says one could argue that they permit better ventilation.

He adds: "The downside, however, is that they don't do as good of a job at concealing the aging Jewish male's bald spot, as I can personally attest."

Lauren Katz is a social media specialist and freelance writer. You can follow her @Laur_Katz