Accessibility links
Who Won The Civil War? Tough Question : The Protojournalist When it comes to on-the-spot answers to simple historical and political questions, some people don't have a clue. 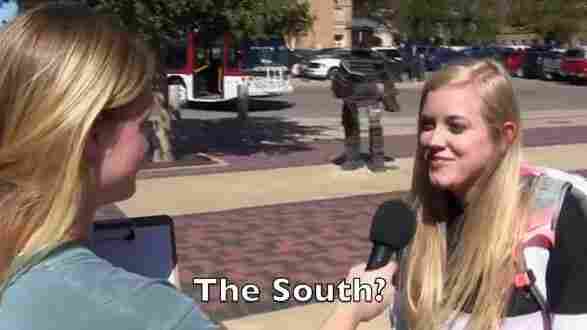 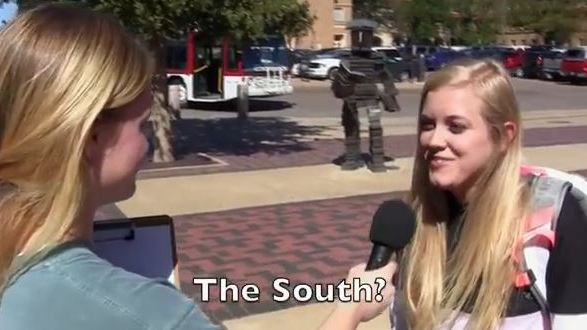 The old joke used to be: Who is buried in Grant's tomb?

Now it's not so funny anymore.

Recently PoliTech, a group of politically engaged students on the campus of Texas Tech University, posted a video titled "Politically Challenged — Texas Tech Edition" in which they quiz contemporary students about history and politics.

On-screen reporter Courtney Plunk tosses the simplest of questions at random passersby "to see just how much our fellow students know about their country."

Question: Who won the Civil War? Answers: "The South?" and "The Confederates?"

Question: Who is our vice president? Answers: "I have no idea" and "Is that a trick question?"

Question: Who did we gain our independence from? Answer: "I couldn't tell you."

To be fair, the questions come out of the blue in the middle of what appears to be a warm, gorgeous day.

The truism that we Americans don't know our history has been plumbed time and time again. Civic cluelessness is certainly not confined to college campuses.

In 1998, the Los Angeles Times reported, Maritz AmeriPoll asked 1,000 or so randomly chosen Americans five questions about American history. Some 38 percent of respondents did not know that our national anthem is "The Star-Spangled Banner." And 40 percent could not name 1776 as the year the Declaration of Independence was signed.

In 2009, the Intercollegiate Studies Institute popped a tougher civics quiz. More than 2,500 folks took the 33-question test. Results showed that only half of adults in the country can name all three branches of government — executive, legislative and judicial.

PoliTech's questions are much simpler. And, as evidenced by the group's Facebook page, some collegians were not thrilled about being portrayed as politically and historically unaware.

"Y'all single-handedly made Texas Tech the biggest joke in the country," one person posted. "Your video does not represent the talent or intelligence that is on the Tech campus. You owe your school an apology."

Writing on the campus news site, columnist Kyle Jacobson observed: "PoliTech was not out to embarrass people or tarnish the reputation of our university. It did a mighty fine job of pointing out something that should be addressed seriously rather than treated as taboo — our generation is politically clueless and places an emphasis on frivolous awareness at the expense of useful awareness."

Not Ready For Pop Quiz

We asked Courtney — a Texas Tech sophomore journalism major from Rowlett, Texas — how she felt about the reporting assignment.

Overall, she says, the experience "has been very positive. Our main goal was to raise awareness that the media plays a huge part of what college students put in the forefront of their minds. From what we have been hearing, we accomplished that!"

The video, Courtney says, "gets students asking questions and realizing they don't put political matters in the front of their everyday thoughts."

Texas Tech senior Raul Cevallos, a management informations systems major from Flower Mound, Texas, is the president of PoliTech. "At first," Raul says, "some students felt that the video was a criticism of Texas Tech and its academics. They were angry because they believed this video was a deliberate attempt to insult the university."

Eventually, he says, people began seeing the video from another angle. "We are confident that these students could answer these questions correctly if they were on a written exam," Raul says. "But this video shows that political matters are not on students' priority lists. There will always be those who feel offended when a group exposes a certain problem within society, but we stand behind our video 100 percent and will continue to work on projects that will bring politics to the forefront of young people's minds."

The answers to PoliTech's questions, by the way, are: 1) the North, 2) Joe Biden and 3) Great Britain.

As for who is buried in Grant's tomb, the answer depends on which tomb you are asking about. The most famous one in American history is the country's largest mausoleum in New York, which, according to the National Park Service, is "the final resting place of President Ulysses Simpson Grant and his wife, Julia. It testifies to a people's gratitude for the man who ended the bloodiest conflict in American history as Commanding General of the Union Army and then, as President of the United States, strove to heal a nation after a civil war and make rights for all citizens a reality."

In case somebody asks.