Accessibility links
Pop Off: Can Kanye Call This A Comeback? : The Record The idea of the "comeback" song isn't new to pop, but the turnaround time is getting a lot shorter.

Kanye West's "Power" is the rapper/producer's first solo release since his infamous run-in with Taylor Swift at MTV's Video Music Awards, which instantly transformed him from "the artist we love to hate" into simply "that guy everybody hates." But anyone expecting humble apologies is in for a surprise, as this comeback offers more defiance than contrition.

Over a bombastic sample -- taken from "21st Century Schizoid Man," by '70s progressive-rock icons King Crimson -- Mr. West proclaims of himself "no one man should have that much power," in a chorus derived from Spike Lee's Malcolm X biopic. He lashes out at Saturday Night Live for daring to mock him, with all of the megalomaniacal fury that makes mocking him so irresistible. Kanye has always balanced his cartoonish ego trips with an eagerness to bare his insecurities, though, and in "Power" he also owns up to struggling with self-doubt: "reality is catching up with me/taking my inner child, I’m fighting for its custody." Now he just has to hope that fight is one his audience still cares to watch. 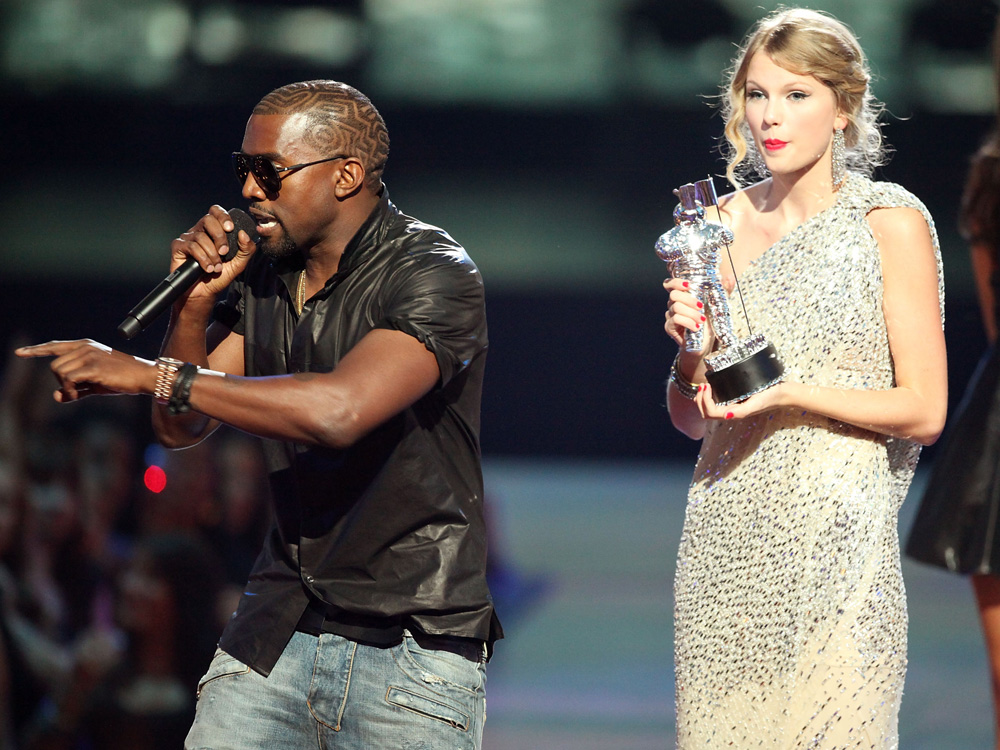 Kanye grabbed the mic from Taylor Swift at the VMAs last September, and he's already released a comeback song.

The idea of the "comeback" song is not one that's entirely new to pop, although the timeframe between exit and comeback has become somewhat compressed in the 140-character age. (Elapsed time between the Video Music Awards run-in and the day "Power" first leaked online: eight months, 15 days.) And comeback singles aren't always successes; the road back from pop oblivion is littered with the likes of the Spice Girls' "Headlines" and MC Hammer's "Pumps And A Bump." Two recent examples of comeback singles show two different approaches.

Rihanna's "Russian Roulette" was the first single from her 2009 album Rated-R, and it dealt head-on with her time spent away from the spotlight. The song, co-written by her frequent collaborator Ne-Yo, is a lament about the consequences that rise out of the game of love -- although its violent imagery caused many to think of her domestic-violence incident with Chris Brown, which occurred just a few months prior. Its video debuted on 20/20 in November, strengthening the song's ties to the narrative that she had become older, wiser, and sadder about matters of the heart as a result of the incident in February.

Kelly Clarkson's "My Life Would Suck Without You," which led off the push for her 2009 album All I Ever Wanted, represented her re-embracing of pop after her "difficult" third album My December, which was marked by label-politics-related struggles she had with Sony Music head Clive Davis, thanks to her insistence on penning a lot of the album's tracks herself. Written by Max Martin and Dr. Luke, who had collaborated with her on her genre-spanning 2004 smash "Since U Been Gone," it didn't directly address her previous struggles. But it was pretty much an announcement that she was still able to embrace big, happy hooks -- and it vaulted from No. 97 to No. 1 on the Billboard Hot 100 during its first two weeks on the chart.

Pop Off is a conversation between music writer Maura Johnston and Jay Smooth (of Illdoctrine.com) about pop music that occasionally airs on Morning Edition. You can hear more of their discussion about Kanye and comebacks in the Culturetopia podcast. If you're just joining us, you can hear and read more from Pop Off, including pieces about Justin Bieber, Nicki Minaj, Usher, Eminem and Lady Gaga.