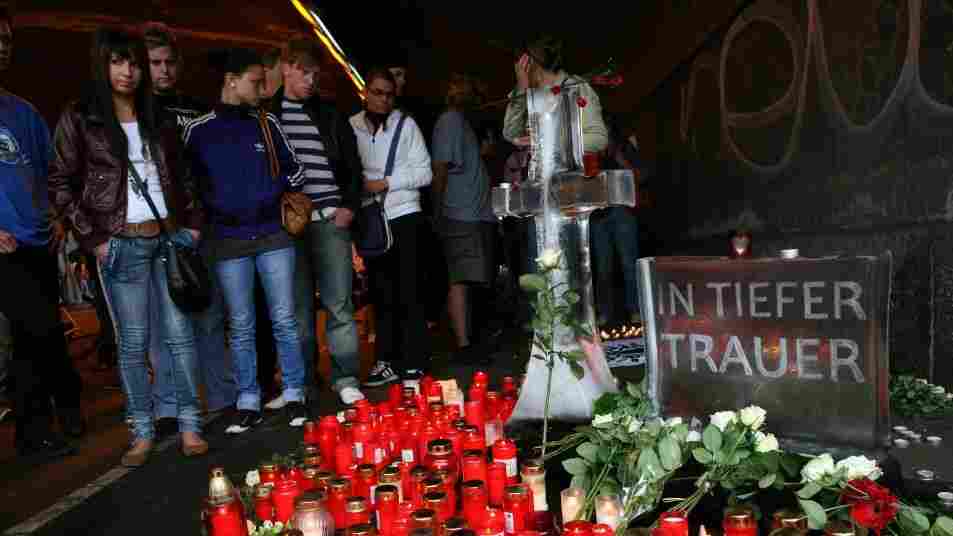 In Deep Mourning: Mourners gather at the site of the Love Parade festival in Duisburg Germany after at least 19 people were killed and hundreds more injured after a stampede broke out during the festival. Patrik Stollarz/AFP hide caption

After 19 people were killed and over 500 injured during a stampede at the Love Parade, a dance music festival held in Western Germany, the Associated Press reported that organizers say the festival will never be held again. (Update via AP at 4:30pm, July 26: German police say the death toll has risen to 20, after one woman died from her injuries.)

The organizers of the festival, held in the town of Duisberg, have been under scrutiny since the tragedy on Saturday, when thousands of concert-goers tried to exit through a tunnel which was the only entrance to the venue. The head of the German National Police told the NME that he urged Love Parade organizers to cancel the festival last year because the venue was too small. According to AP reports, German prosecutors say an investigation into possible charges of negligent homicide will be aimed "at persons unknown."

Reports also said that in order to prevent further panic, the festival continued for hours after the stampede, and many continued dancing without any knowledge of the deaths. Associated Press video footage shows attendees climbing over barricades and performing CPR on other fans while music plays in the background.