Accessibility links
Selling Sex And Symphonies: The Image Of Women In Classical Music : The Record What do classical music's album covers say about how we expect women performers to look? 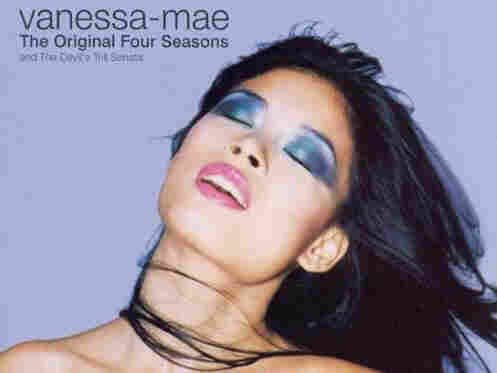 Our Hey Ladies: Being a Woman Musician Today series continues with NPR Music classical producer Tom Huizenga's new interview with classical violinist Lara St. John. St. John has been accused of using physically revealing album covers to help sell her music, but says she had full control over her representation and marketing strategies, although discussions about her body have often overwhelmed discussions of her body of work.

The importance of physical appearance was echoed in the responses to our questionnaire for women musicians, particularly among other classical music performers. Here is a sample of responses:

Classical music marketing photos still show women predominantly in sexy outfits with lots of skin, and men in serious, somber clothing. Why do women feel they need to look so standardly magazine-model-like in order to get concerts?
--Elizabeth Brown, composer and flutist

Especially with the advent of opera on TV and film, the HD factor is really upsetting women who now feel the need for all kinds of facial procedures and bariatric bypasses. The industry has gotten much harder on women, even requiring us to perform nude; this was never in opera!
--Sharon Azrieli, opera singer

Overweight men in opera, who sang lead roles, could pretty much expect to be judged on their voice and their acting, with no mention of their size. But a large woman would always be criticized for her size, often before any comment was made about her voice or acting.
--Deborah Voigt, soprano

To illustrate these observations, we asked Tom Huizenga to compile a selection of classical music album covers featuring women artists for discussion, starting with the St. John "nude cover." Do these images reflect what you see in the record stores for classical music? How do they compare to the album covers you see for male performers, if at all? Do these representations spill over into the concert-hall performances that you attend?