Accessibility links
Pop Off: He Raps, She Sings. Does It Still Count As A Duet? : The Record Recent hits suggest that there's an imbalance of power between men and women on pop duets. 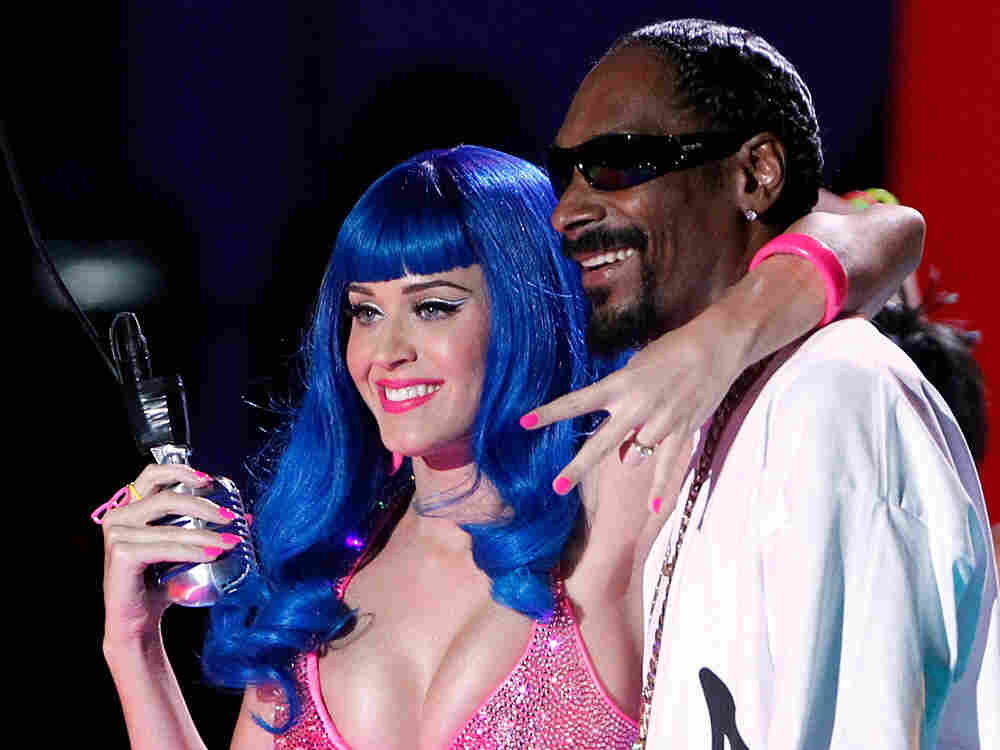 The Pop Off Podcast: Duets Redux

More Conversation: Listen To Jay And Maura Duet On Duets

MAURA JOHNSTON: So, Jay, the No. 1 song on the Billboard Hot 100 right now is a duet between Eminem and Rihanna, "Love The Way You Lie," replacing another he raps/she sings duet, "California Gurls" by Katy Perry and Snoop Dogg. But unlike that song, "Love The Way You Lie" is pretty intense, with lyrics that seem to directly reference the more fraught parts of both parties' personal lives:

Here we go again
It's so insane
Cause when it's going good
It's going great
I'm Superman
With the wind at his back
She's Lois Lane
But when it's bad
It's awful
I feel so ashamed
I snap
"Who's that dude?"
I don't even know his name
I laid hands on her
I'll never stoop so low again
I guess I don't know my own strength

Those lyrics are rapped by Eminem; Rihanna's contribution is a leaping chorus that sounds like wails, in which she sings about her lover "stand[ing] there and watch[ing her] burn / but that's all right because [she likes] the way it hurts." It recalls The Burning Bed (although that Farrah Fawcett movie about domestic violence came out four years before Rihanna was born, so that connection might be the result of too much childhood TV Guide reading than anything).

This is why there's something odd about the duet to me, and it reminds me of a similar dynamic in "California Gurls" -- namely, the modular aspects of the song, which seem even more striking given "Love the Way You Lie"'s intense subject matter. Rihanna talked about the song being an emotional one for her, saying to Access Hollywood:

"I knew if he sent me a record there must be something to it," Rihanna explained of how she was brought on board. "It couldn't just be, 'Oh, Duh! She was in that relationship so we have to get her.'

"The lyrics were so deep, so beautiful and intense. It's something that I understood, something I connected with," Rihanna added.

But what interests me about this song is that her lyrics are mostly abstract -- she's mainly talking about being the object of Eminem's violence. I guess what I'm wondering is if there's a "Love The Way You Lie Pt. 2" coming out, one where we get to hear more of Rihanna's side of the story. Or if Rihanna is keeping quiet deliberately, because she doesn't want to have to deal with her pain again. But does being that sort of chorus-only presence in the song undermine her strength? Jay, what do you think?

JAY SMOOTH: I agree; what struck me first about the song is how little Rihanna gets to reveal of herself, compared to Eminem.

It's such a personal song for both of them, as they act out both sides of an abusive relationship. But while Eminem explores the psyche of the abuser with an almost disturbing amount of depth and detail, Rihanna gets far less space to share the survivor's side of the story. She's only given enough space to utter pop lyric platitudes, and I'm left yearning to hear more about who she is, how she survived this, and how (or if) she escaped it.

Now in fairness, she may just be more reluctant to bare her soul, as you said, and few people can ever be expected to match Eminem's appetite for over-sharing. But as so many of today's pop duets relegate women to the chorus, I wonder if the system has become rigged against female voices.

When you heard a duet from Ray Charles and Betty Carter, or Loretta Lynn and Conway Twitty, they each shared center stage in the verses and harmonized in the chorus. But in "Love The Way You Lie," Eminem's sole custody of the verse gives him literally ten times as much time to speak as Rihanna (by my count she repeats the same 42 words, while he delivers over 500).  Do you think it's possible these days for women to have an equal say in pop duets?

MJ: Well, if you did the word-count experiment on "California Gurls," you'd find the ratio reversed. Yet it's clearly Snoop who's driving the song -- the video ends with Katy reduced to being one of four women surrounding him, and the primping she's singing of is clearly done for the benefit of men. So the answer might be "No, except in special cases"? I would love for women and men to have more equal time in these collaborations, even if it's just on a bridge where the two players back-and-forth each other a bit.

What this all adds up to is the idea that the one-to-one duet in pop music has really gone by the wayside -- even in "Telephone," which features two women, Lady Gaga is clearly the star above Beyonce. (It's also notable that "Video Phone," the other collaboration between the two, added Gaga after the fact -- the track was originally on I Am... Sasha Fierce and then retooled.) Instead, these songs have been transformed into collaborative marketing efforts -- "Hey, if you like this artist, you may like this artist." I think that has led to celebrity personae overtaking songs' narratives, which in turn leads to persona -- even if it's completely extraneous to what the song is about -- taking over the entire song itself.

Pop Off is a conversation between music writer Maura Johnston and Jay Smooth (of Illdoctrine.com) about pop music that occasionally airs on Morning Edition. If you're just joining us, you can hear and read more from Pop Off, including pieces about Justin Bieber, Nicki Minaj, Usher, Eminem, Lady Gaga and Kanye West, and subscribe to the Culturetopia podcast for extended conversations.