Accessibility links
Olympia, Wash.: Why Here? Why Now? : The Record A DIY ethos and a drive to keep an all-ages scene alive has helped the northwest town remain vital.

Olympia, Wash.: Why Here? Why Now?

Olympia, Wash.: Why Here? Why Now? 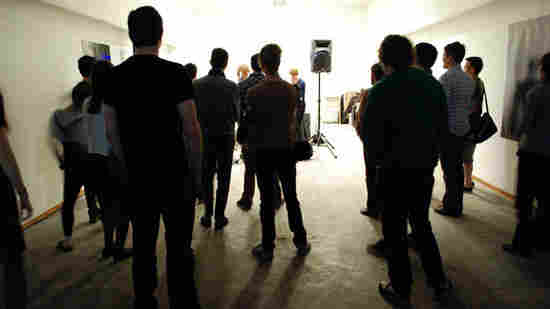 The Olympia All Ages Project is based out of Northern, an art gallery, community center and the only official all-ages performance space in town. courtesy of Northern hide caption

Olympia, Washington's misty state capital, has been chugging out music for years. In the 1990s it was the breeding ground for the punk riot grrl movement and home to bands like Nirvana and Sleater-Kinney. Modest Mouse recorded their first album here. It's also the base of the independent label K Records, headed by Calvin Johnson of the band Beat Happening. Many of these big names have since left this small town, but a new generation of young musicians continues to push music through the speakers, due in part to a show culture that welcomes all ages.

On any given weekend, music seekers can find a handful of house shows to enjoy, but in addition to this thriving DIY scene, an organization called The Olympia All Ages Project has been putting together concerts and events that let in the under-21s. The project is the brainchild of Mariella Luz, the general manager of K Records. Luz started the project to carry on what she calls a long history of all-ages music in Olympia. It turns out that that even in a city with that long history, it is difficult to keep an all ages venue open.

In the absence of these venues, Luz decided to provide a new home for Olympia's all-ages scene.

"Back in 2008 I was putting on a couple of shows in town for our label, and most of our bands only play all ages shows, they don't play bar shows," Luz says. "At that time the last of the all ages venues and galleries had closed, so there wasn't anywhere to have an all ages show but at a house. So we decided to start a venue, and in February of 2009, Northern opened."

In addition to serving as the only all-ages venue in town, Northern acts as an art gallery and a community space. On nights when bands aren't playing you can find a mish mash of workshops and events centered on the arts. The flexibility of the space is one reason that the venue has been able to succeed where other all-ages spaces have failed.

"The caveat for us in being allowed to stay open is that we can't just be a music venue," she explains.

Northern has permit approvals for what's called an "all-venue" space, which allows for more leeway with building codes than if they had a permit for just a performance space. By making the space a community center that with a broad focus on a range of arts programming, Northern is able to stay afloat.

Tom Hill, a building official for the city of Olympia, explains that facilities open exclusively for performance arts need to meet stricter requirements. Failure to comply with fire code led to Manium's closure.

"The use wasn't really the issue. It was the use of the specific building for that purpose which became the issue," Hill says. "They wanted to go in without the necessary improvements to the building, which included exit doors, fire flanker systems, and exit lighting. In essence we weren't telling them that they couldn't use the building, what we were telling them was that they needed to bring the building in to minimum standards under both the international fire code and the international building code ... they finally did, by the way. They have the approval to open if they want to."

Carrie Keith of the Olympia band Gun Outfit says that though Northern is the most established all-ages location for shows, it is by no means the only place that younger members of the community can see live music. She prefers house shows.

"Houses end up being more intimate, and I feel that there's a greater sense of freedom and self creation," she says.

Having an established space however, is important for supporting the all-ages community in Olympia.

"With the Northern I think the all-ages thing fosters a huge sense of community," says Guy Weltchek, a member of Hooded, a local band who played at Northern this past Sunday, "It has more of a commitment to local music than a lot of the bars in town, and I think it's really important in Olympia to have
an all-ages scene."

Though some may disagree on where the best place to see a band is, one thing is for sure, there are plenty of options in Olympia. Luz says that there were 15 shows in town just last week. Not bad for a town with a population of fewer than 50,000 people.