Accessibility links
Eight Things You Need To Know Before You Start A Music Festival : The Record Starting a festival from scratch involves starting new relationships with musicians, sponsors and vendors. Here's how two startups found their way. 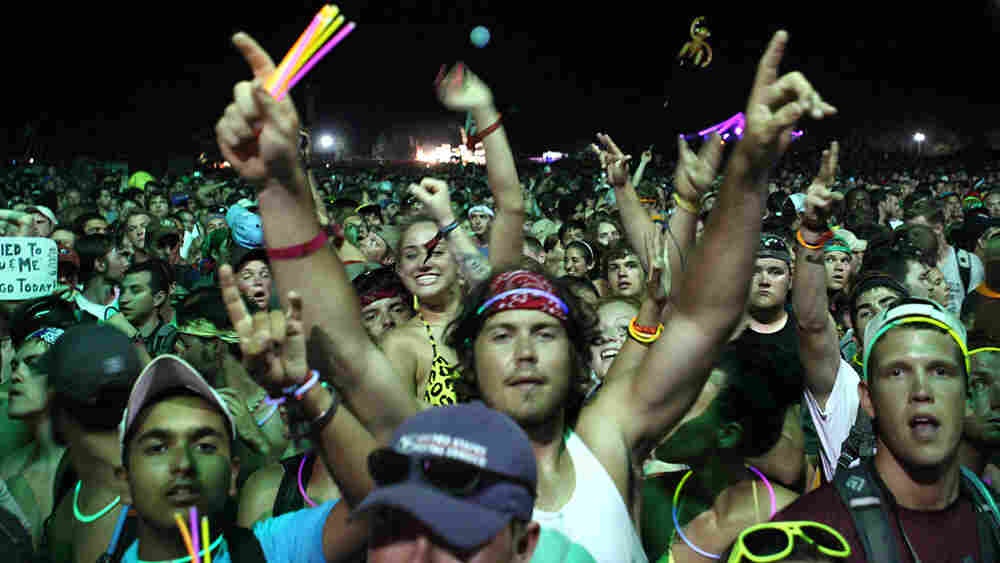 The crowd at Bonnaroo, a festival held in a field in Manchester, Tenn., on June 13, 2010. Diana Wong for NPR hide caption

St. Louis is home to two brand-new music festivals this weekend. So we thought we'd ask their organizers about what they had to do to launch such events from scratch.

Brian Cohen is putting on LouFest, a gathering of indie stars including She & Him, Broken Social Scene and Jeff Tweedy. He used to work in TV production and had never staged a music event before. By contrast, Mike Kociela started Entertainment St. Louis a decade ago and has been producing music shows, street festivals and Mardi Gras parades ever since. He's running the first St. Louis Blues Week, a mix of performances, workshops and an awards show, which got underway last night.

Here are their tips on getting your own music festival off the ground:

"My first step was to surround myself with people who know what they're doing, who've done this before," Cohen says. "It was a matter of asking around, who's the best booker in town, who's the best production manager in town."

Kociela, having more experience, had a better idea of how to get started, but he lined up outside expertise right away, too, bringing on Jeff May, the booker at BB's Jazz, Blues and Soups, a little St. Louis club near the ballpark.

2. Get You Some Money

While the first task for LouFest's Cohen was to assemble a knowledgeable staff, Blues Week's Kociela offers different advice. "The first thing is to find money," says Kociela. "All the great ideas in the world don't get you anywhere unless you find funding." Blues Week is a free event, so he is unapologetic about selling sponsorships "purely as a marketing opportunity."

Cohen's advice -- again -- is to find someone who knows how. "Sponsorship development is difficult and I had no experience in doing it," he says. It's especially tough when you're a new game in town. "Some of the reaction was, 'It sounds like a cool idea, but we'll have to see how it goes Year One.'"

3. Get Your Acts Together

For Kociela, picking out a lineup for a blues festival came naturally. He decided to go with a tribute show motif, putting together sets featuring local musicians playing local styles or paying homage to St. Louis guitar great Albert King.

Cohen had to decide just what kinds of bands he wanted to showcase. He sat down with his booker and talked about who they would want to hear -- not just the headliners that could draw crowds, but the surprises who might delight people while they waited around for their favorites to come on later. Cohen put it out there on Facebook and concentrated on the acts that got repeat business in the comments section. "If we saw trends, obviously people wanted to see Tweedy, we used the data to determine who we booked."

Both Cohen and Kociela say city agencies did their best to be accommodating. The parks department embraced LouFest as its first sponsor -- the event is taking place in Forest Park -- and the mayor's team worked hard to help the newbies navigate the various permitting processes. "We made contacts as early and often as we needed to," Cohen says. "A lot of times, city agencies get requests at the last minute and that's a hassle."

5. It's Not All About The Music

Festivals these days have to offer attractions other than sound. LouFest's "nosh pit" will feature eats from respected restaurateurs, including Pi Pizzeria, an Obama favorite. Its "kids village" will offer child-friendly musicians and entertainers and activities including a rock-climbing wall.

"With an event of this size, it's really not an option any more not to consider the environment," Cohen says. LouFest is trying to make its carbon concerns real, not just through the expected recycling and public transportation options, but by convincing vendors to use only compostable products and giving fans free water to cut down on the number of plastic bottles.

Cohen and Kociela both stress the need to start plates spinning early. All the stuff listed above -- hiring people, pulling permits, attending to booking musicians, negotiating contracts with vendors -- need to be dealt with many months before your concert date. "We had meetings six months ago where people asked why they were there," Cohen says. "'This is like a day before the show meeting.'" Cohen didn't want to take any chances.

"We did all our hard work a month ago," Kociela says. "We like to do everything well in advance so that everyone is doing their job and it all just unfurls."

It's not like planning a wedding. It's a lot bigger. So rely on help. "As a first-time producer, first-time festival organizer," Cohen says, "the best decisions I made were the people I brought on board."