Accessibility links
First 'Authentic' Klingon Opera By Terrans (That's You, Earthlings) Premieres : The Record The drama of battle! The euphoria of song! It's opera! It's Klingon opera! 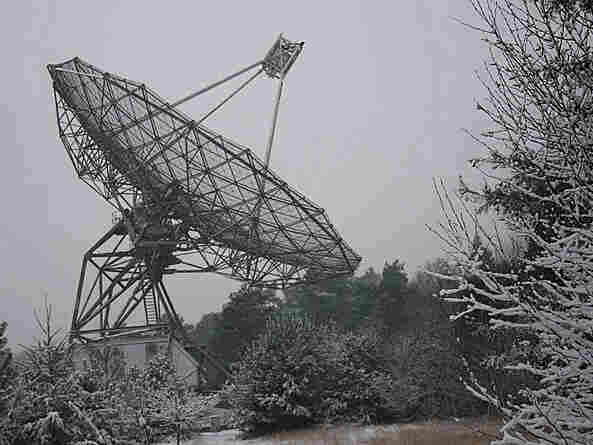 "Klingons" on "the planet Qo'noS" were "invited" to the performance of the "first authentic Klingon Opera" via this "decommissioned telescope." courtesy of Camras hide caption

Opera devotees and sci-fi fans are a match made in Valhalla: opinionated lovers of spectacle and fantasy whose temperaments can be as overblown as some of their favorite characters. If they ever hooked up (is there a profile trait on eHarmony for geekdom?), the perfect night out might involve tickets to see a Klingon opera.

There actually is a Klingon opera they could see. It's called, 'u,' and it premieres tonight at the Zeebelt Theater in The Hague, here on Earth (in Holland). It will also be presented at the Qetlop in Farnsberg, Germany exclusively for the Klingons of the Khemorex Klinzhai Fleet. If your iCal is synced to the home planet Qo'noS, these dates apparently coincide with the end of the summer solstice in the year Kahless 846.

[Yes, we realize that Klingons are actually human actors dressed up with prosthetics and make up and that the opera in question is more an artifact of extreme nerdery than a genuine work of an alien culture. Still, due to a gnawing fear of retaliation by people who have access to home-made weapons that look like they could chop off our blog-writing hands, we are treating it as the latter. -Ed.]

The groundbreaking work, which translates to "universe" or "universal," is the first authentic Klingon opera to be performed on the planet Earth. It's produced by the Klingon Terran Research Ensemble (KTRE), a Dutch group. NPR spoke with some of those responsible for the upcoming performances when they were still in the early phases of work shopping the piece.

Very few examples of Klingon opera survive, save a handful of snippets in The Next Generation and Deep Space Nine episodes of Star Trek. So KTRE's artistic Director Floris Schoenfeld has undertaken careful archival research. In particular, he studied an ancient musical treatise called the paq'jachchcu, or "book of the perfect scream." 'u' is basically a recreation of Klingon opera based on principles of musical combat laid out in this rare manuscript. The epic story retells the legend of Kahless the Unforgettable, the first Klingon emperor.

KTRE has added new meaning to the phrase "publicity machine." In April it used a decommissioned telescope to issue an invitation to Klingons on Qo'noS -- an M-class planet orbiting the star Arcturus (also known as Alpha Bootis) approximately 36 light years away. This is the first documented intergalactic cultural message between Terrans and Klingons. Marc Okrand, Klingon language expert and Star Trek consultant, translated and read the message. He is also credited as a librettist of 'u.'

Although a number of Klingons residing on Earth have stated their intentions to attend, it remains unclear if the KTRE will be receiving a delegation of emissaries from the home planet or even a native music critic as an advance guard. If the invitation reached Qo'noS in time, the lengthy space voyage should not deter those seeking such epic entertainment. Perhaps, while they are here, the Klingon would also enjoy The Metropolitan Opera's new 'Ring Cycle,' also due to start this month. Qapla'!