Accessibility links
Hey Ladies: Pop Stars Vs. Role Models : The Record Is it possible to sell a bunch of records and be an iconic female musician in 2010? 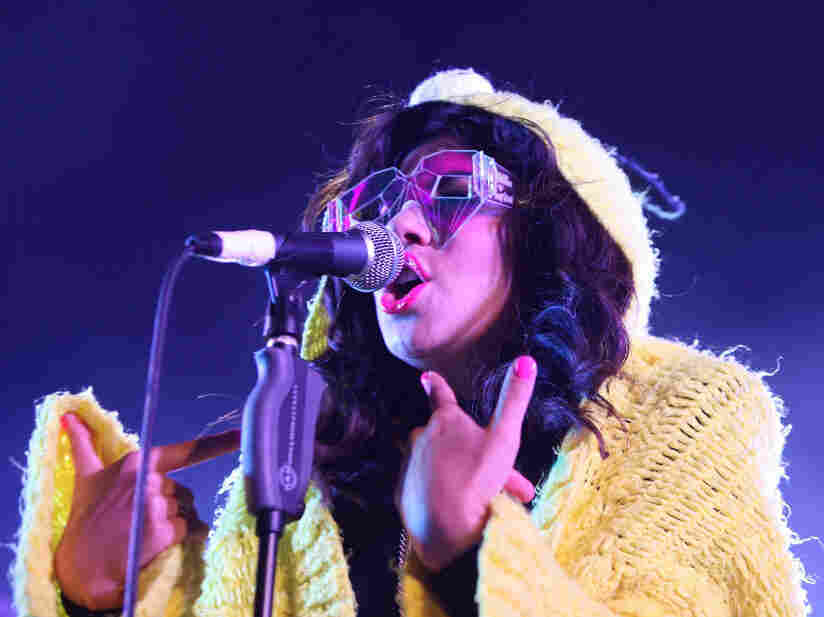 Marina Diamandis of Marina and The Diamonds performs live at the Reading Festival on August 27, 2010 in Reading, England. Simone Joyner/Getty Images hide caption

All summer we've been producing web and radio pieces that draw from a questionnaire we sent out to women working as musicians right now. We wanted to hear from them directly about performing, recording, writing, doing press and trying to have a life at the same time.

Piper Kaplan was among the more than 700 who've responded so far. She's in the Los Angeles band Puro Instinct. The 23-year-old misses the female rock and pop icons who defined earlier eras.

Today's superstar pop divas are pre-packaged and derivative, in Kaplan's eyes. But the chief pop critic of the Los Angeles Times disagrees.

"This era is an amazing time," Ann Powers says, "for young women musicians, young women songwriters, young women who, to me, seem to be very involved if not completely in charge of their own careers."

Lady Gaga, Beyonce, Ke$ha, Rihanna, Katy Perry, Taylor Swift and other young women have been dominating pop. Even if their messages sometimes seem less, well, self-actualized than some people would prefer.

"They are not necessarily making strong, overt statements about being a feminist or standing up for anyone's liberation but their own," Powers says. "And I think sometimes that's where some women can feel disappointed in this younger generation of artists."

But cracking the charts for this generation can mean treading lightly when it comes to expressing feminist sensibilities, just in case it turns off potential listeners.

"I don't want to cut anybody out," explains Marina Diamandis, of Marina and the Diamonds. "Like males, for example. And women who aren't ready to think about those things."

Still, Diamandis says music led her to her own strongly-felt feminism. Not the top 40 radio she heard growing up in Wales, but the tunes that eventually inspired her to become an artist -- by the likes of PJ Harvey and Brody Dalle of The Distillers -- part of a long line of powerful women in rock from Wanda Jackson in the 1950s through today.

Powers covered the riot grrrl movement in the 1990s for the New York Times.

Our cultural fantasies and aspirations are reflected in our popular music. So "liberation" right now may have more to do with making money than fomenting a movement. And, Powers adds, female empowerment's meaning has changed.

"In a lot of ways, pop's youngest divas are career women," she says, pointing to Taylor Swift.  "She's all about -- 'I'm a songwriter, I'm successful behind the scenes, I'm not just this pretty image.' And I think that is, in a strange way, the new version of the liberated feminist: 'I've got my own thing.'"

That's never been easy for women in mainstream music. Now that the industry's falling apart, it's even harder. Which makes the case of Kelly Clarkson especially surprising.  She started as a product of the completely fabricated pop machine, American Idol. Still, over the past eight years she's managed to buck the "male Svengali" formula to achieve massive success on her own terms.

"I am not normal," Clarkson says. "Usually, people don't weigh what I weigh. Usually people don't go against the grain as a far as, 'No, I don't want this song from the most popular writer ever' and it's not because I don't like the song. It's because I would rather work with people that I want to work with."

Clarkson credits growing up under the weight of small-town scrutiny with helping her deal with mainstream pop expectations. And she's somewhat unique among her peers in her resistance to hypersexualization.

That's also one of the biggest differences between female music icons of the 1960s, 1970s, 1980s and today, says Brooklyn-based rocker Tamar-kali.

That's something Diamandis thinks about a lot. The 24-year-old says it would be a lie to deny her sexuality. But she also doesn't want to emulate the majority of other female pop stars out there.

"Whether they know it or not, or do it on purpose or not, they are letting sex override everything else, and I think that's a real shame," Diamandis says.

There is a place to find powerful female role models and icons in rock -- and that's at the grass roots level. They're the hundreds of counselors and coaches at the rock camps for girls that have sprung up all over the country.

"I'm just hoping to still be around to be writing about music when those girls are running the scene," says Powers. "Those girls are coming up with a completely different sense of what they can do than any generation of female rockers before them."