Accessibility links
You Ask, We Answer: Why Do Some Songs Fade Out At The End? : The Record Recording engineers, historians and journalists help us solve one of pop music's mysteries.

You Ask, We Answer: Why Do Some Songs Fade Out At The End?

You Ask, We Answer: Why Do Some Songs Fade Out At The End? 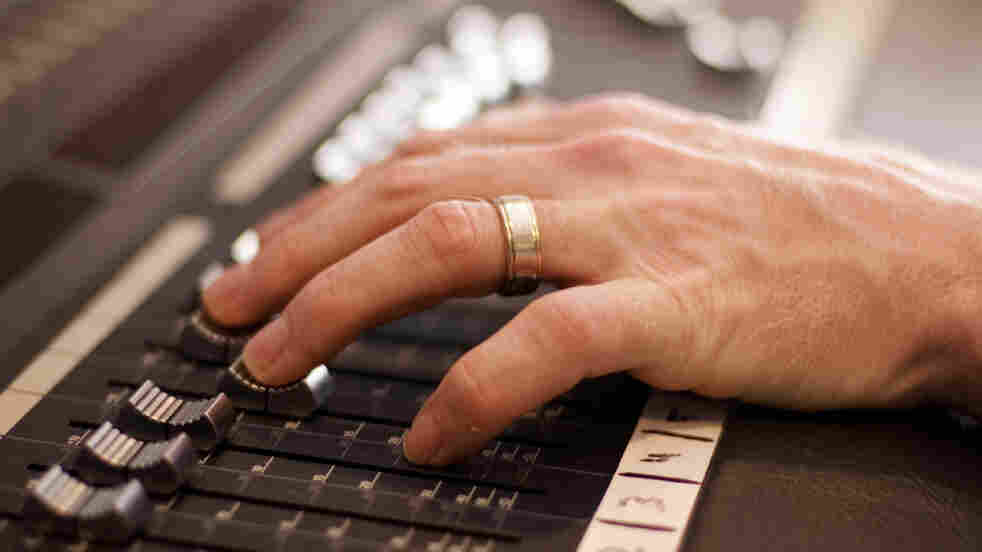 We've received a lot of interesting questions from you regarding aspects of the music industry you'd like to know more about. We're tackling them one at a time -- so if you keep the questions coming, we'll keep doing our best to answer them.

"Who created the idea of songs fading out and why?  It seems a rather odd concept--that a song would not end definitively, but rather fade away into silence.  That's not how songs are played live; why is it accepted for studio recordings?"

Short answer: we don't know who or why. But we got some pretty good ideas from a bunch of very knowledgeable folks.

There has been some speculation that song fades date back to the earliest days of recording. But back then it would have been a challenge because recording was mechanical -- a live performance was etched directly onto a cylinder or disc by a needle that was essentially vibrated by the sound waves created by a band. One way to achieve a fade as we know it today would be for the musicians to play softer and softer and softer and softer.

Tom Larson teaches music history and performance at the University of Nebraska-Lincoln School of Music. Larson, who has written three textbooks, including The History of Rock and Roll, says:

"I'm pretty sure fade outs did not occur during the days when 78s were used ... since in those days music was recorded directly to disc. Once studios started using magnetic tape for their masters (early-mid 1950s), it would have been possible to do the fade out in post production mixing sessions."

Nolan Porterfield, music historian, author of Jimmie Rogers: The Life and Times of America's Blue Yodeler, says it's older than that:

"There may be many reasons for the 'fade out at the end,' but I don't think it has much to do with the limitations of the format. 'Can't think of an ending' may be as good a reason as any, but the fade out was being used long before the 45. ... 'Because I like the way it sounds' is also a contender."

Bob Olhsson, mastering engineer. Ohlsson, who worked on many Motown hits back in the day, thinks there was a technological limitation:

"It was a solution to keeping singles under 3 minutes because the disk cutting level dropped like a rock after 3 minutes."

Dan Daley, music journalist. Daley says aesthetics may indeed have had something to do with the popularity of the fade.

"The fade-out became way to end the record in a manner that perhaps suggested there was more to come."

Elliot Mazer, producer and engineer (Neil Young, Linda Rondstadt, Frank Sinatra, Santana, many others), says fades are a way of having a hook linger in a listener's ear:

"I believe that one of the advantages of fade-outs was that we could repeat the hooks and drive that message home."

"That was the purpose of the fade. The song that never ends. We did it because it sounded good."

Colin Escott, author of Hank Williams: A Biograpy and The Grand Ole Opry: The Making of an American Icon:

"A slow song in particular can drift languorously away instead of coming to an abrupt conclusion. ... Another [possibility] is that in the era before multitrack, you could have a really good take with a ragged end, and rather than call for another take you could bounce the take to another machine and then fade before the ragged end."

"Most time(s) it was because the arranger didn't have an ending, or to shorten the arrangement for air play. Remember, back then singles wouldn't be played if they were longer than 3 minutes."

Gregg Geller, archivist and consultant (Sony Legacy and others), thinks fades begin to take hold with the advent of rock 'n' roll:

"I remember my mother expressing great consternation at their prevalence back then -- 'couldn't they figure out a way to end the song' she would ask. More to the point, with the passing of the big bands and orchestral pop, recordings were made improvisationally by smaller groups in the studio rather than according to formally structured arrangements (with predetermined endings) for larger aggregations, and thus tended to exceed the 3:00 time limit that radio stations demanded back then. So, in order to bring the total time under 3:00 the fade was employed.  Of course, radio deejays during this period were fading all the records they were playing anyway (even the ones that ended cold) -- order to talk over them, deliver their spiel, sell products, etc."

Ron Albert, recording engineer, agrees. He and his brother Howard recorded such hits as "Hotel California" and "Layla" at Criteria Studios in Miami.

"The fade happened because we had to give the DJ a cue that the record was ending, so he could talk over that and segue into the next record,"

Albert says the fade almost became a decree from both radio and producers Tom Dowd and Jerry Wexler of Atlantic Records, who frequently worked with the Alberts.

"The formula for Tom and Jerry was verse, chorus, verse, chorus, bridge, maybe a solo and then chorus repeated into a fade so the hook was what the listener was left with. Also, if they decided an album track would become a single, we'd have to edit it and usually fade it to keep it under the three-minute mark for radio. When they put out 'Layla' as a single, we did a fade on it, which is not how the album track ends. It was all about radio."

Joe Chiccarelli, engineer (Counting Crows, Tori Amos, My Morning Jacket), says that, though the fade fell into disfavor with the advent of FM and album oriented rock (AOR) formats, it eventually came back:

"Fade Outs had a resurgence in the '70's with funk bands who might jam endlessly on a two chord progression. This was a simple way to create an ending to a jam session that had no definitive end. The eighties and most especially the alternative bands of the '90s who aspired to a more honest and natural aesthetic tried hard to come up with endings to songs. They wanted something that represented the live sound of the band. Fades were deemed a cop out and cheesy."

The fade never went away. Even today, Chiccarelli says, it's just another trick in the book for producers and engineers.

"There's the slow FM radio fade, the AM radio quick fade and the rather drastic Motown fade. All available to whatever suits the artist and the song. Just like any trick or sound effect in the record producers arsenal they have become part of the pop culture and will always be used when appropriate."

Or not, depending on your tastes. We're sure you'll have your own theories -- send them to us at therecord@npr.org.