Accessibility links
You Ask, We Answer: What's A Hook? : The Record What is a song's "hook?" It's that part that sticks in your mind -- whether you want it to or not.

You Ask, We Answer: What's A Hook?

You Ask, We Answer: What's A Hook? 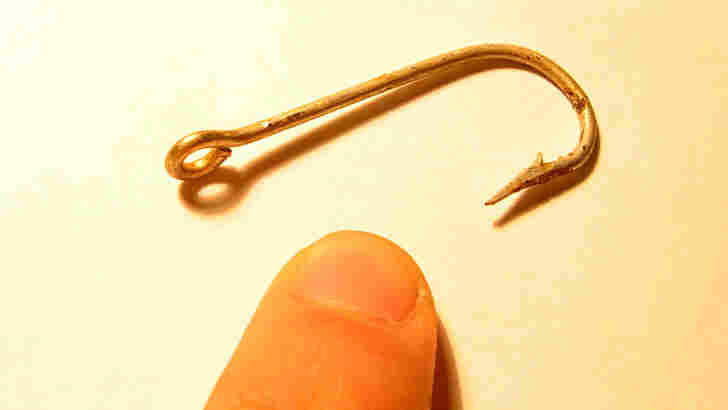 There’s more than one way to ‘hook’ a listener. Renato Guerreiro/flickr.com hide caption 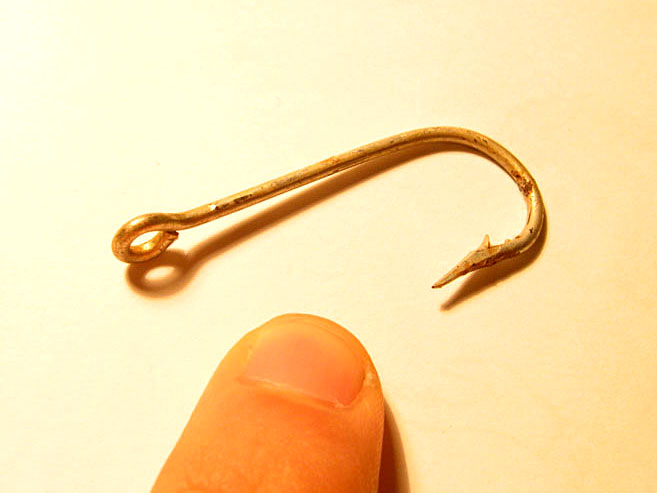 There’s more than one way to ‘hook’ a listener.

Your questions about the music industry keep pushing us to learn more -- so keep them coming and we'll do our best to try to answer them.

"i have heard the term 'hook' so often in reference to music...i have discussed this with friends and no one i know can agree on just what a hook is...have you covered this before?....if not i would really like to hear an explanation."

The term "hook" likely goes back to the earliest days of songwriting because it refers to the part of the song intended to "hook" the listener: a catchy combination of melody, lyrics and rhythm that stays in the listener's head -- something that songwriters from the dawn of time have wanted to achieve.

Paul Cunningham -- "Bender" to his listeners -- is Assistant Program Director and morning host at 106.1 KISS-FM in Seattle. He's been a Top 40 jock for more than 20 years and he says the best hooks instantly strike a chord, so to speak.

"At this very moment, a brand new song from Nelly that we're now playing called 'Just A Dream' has a fantastic hook. It's just something that, when you hear a song, you know the hook is really good when you hear it for the very first time and it's instantly familiar."

It's often the chorus of a song, which can include the title or theme of the song. Think of the Beatles' "All You Need Is Love" -- after several verses, that phrase is repeated; followed by "bah bah bah bah bah bah;" followed by the refrain, "Love is all you need." The chorus and refrain become the hook -- the thing you remember.

All You Need Is Love

But one of the hottest songwriters today points out that the hook is not always the chorus. Ryan Tedder has written hits for Leona Lewis, Beyonce, Kelly Clarkson and his own band, OneRepublic.

"The hook can be the track itself. Like in Coldplay, 'Clocks,' the hook was [hums the opening piano riffs] -- that was the hook. In [Black Eyed Peas'] 'Boom Boom Pow,' there is no hook. It is just one section after another of really catchy, infectious club music without any one section over-riding the next.

In [OneRepublic's] upcoming single, 'Good Life,' the real hook is the post hook -- it's what comes after it. We have this really super simple whistle. I hadn't heard a whistle in a song in forever [at least since 2006 when Peter Bjorn and John whistled ubiquitously in 'Young Folks' -ed.] and that's all I kept hearing on the song so I just whistled this melody into the mic and it really is the hook -- it's the catchiest part of the song."

Tedder says the instrumental hooks have always been a part of rock.

"Going back into the '60s and '70s, there've been a lot of songs where the musical part of the song was the hook: [The Beatles'] 'Across the Universe' the hook is (hums the opening acoustic guitar riff) it's that guitar part." [The Record would argue here that it's the repeated chorus/phrase: 'Nothin's gonna change my world.' -ed.] Of The Verve, 'Bittersweet Symphony,' the hook is obviously (hums the string orchestra intro that comes back as a bridge) -- that's the hook."

This raises an interesting question: what's the difference between a hook and a riff?

Tedder says a riff is often a signature instrumental phrase or intro to a song.

"I think a riff can be complementary but when you ... go from complimentary to primary, then it becomes the hook to me. And a lot of times it's completely inadvertent. [Aerosmith and Run DMC's] 'Walk This Way' [hums the opening guitar riff that repeats later in the song] -- I mean that is just the riff but it's just as strong as the hook [the chorus/phrase, 'Walk this way; talk this way'].

It's simple, catchy -- or annoying, depending on your point of view -- but it worms its way in and won't go away. It sometimes uses a different musical structure from the verses to set it apart. The hook is often the key to a hit song -- sometimes, says Seattle jock Bender, to the detriment of the rest of the song.

"One of the biggest songs of the year still is 'Empire State of Mind' from Jay-Z and Alicia Keys. And the biggest part of that song isn't Jay-Z. The biggest part of that song is Alicia Keys doin' the hook -- when she screams 'New York' and 'Concrete jungle where dreams are made of.' That's the part of the song that everybody from Mom and Dad to the kids know. That's the part everybody knows and that's the hook. It's so unmistakable that Jay-Z's lyrics are obviously genius. But again the hook of the song is what everybody remembers."

Remembering is key. And the key to remembering is repetition. Last week we learned from a host of experienced studio engineers that one of the reasons pop songs often fade at the end is to leave the listener with the chorus repeated over and over as the song fades out. You can think back to centuries old folk songs, where the refrain is repeated after every verse -- to establish the theme or moral of the song in the minds of listeners.

Ryan Tedder says nursery rhymes are another good example -- where a repeated melody embeds the message.

"The human brain retains melody easier than it retains words. It's that simple. You can go back through the '80s and '70s and when people start singing a chorus that you might know ... You might remember the first three words but you can hum the entire chorus. And you might even be able to hum the verse because something about melody sticks to the head. I think it starts with nursery rhymes when you're a kid and it just kind of embeds -- we're trained to remember that stuff. In elementary school and growing up in Sunday school, half my lessons were taught using simple little songs, like the Presidents of the U.S.A. and the fifty states. And that stuff sticks with you."

Tedder learned songwriting in Nashville and producing by doing dance remixes for Timbaland. He firmly believes that melody is the single most important aspect of a hook -- and of a song. But just as the pendulum swung from what's called the Great American Songbook to rock 'n' roll in the 1950s, Tedder thinks its swinging again.

"Definitely these days, with dance music being the single biggest thing in the world, the hook often times is the track itself ... Music has been so throttled by dance that I'm seeing song after song -- some of the biggest songs in the world -- that literally have no pattern, no format. Where you think the chorus is going to happen, there's literally nothing, just a musical bed. It's turning into like a house DJ kind of rave but it's on the radio. Like you look at [Black Eyed Peas'] 'Boom Boom Pow' or you look at Akon's new single, 'Angel' -- it sounds like you're in Ibiza and it's 3:30 in the morning and everybody's wearing glow sticks and jumping up and down. And I'm not saying that's a bad thing. I'm just saying it's reality."

So is the hook a thing of the past. Probably not. But it's certainly not the catchy phrase, repeated over and over that we associate with pop song hooks, says Bender.

"You'll hear the hook two, three times -- in the first quarter; at the half; and then the last quarter -- and they'll end on whatever note they happen to be playing. But back (in the '60s, '70s, and '80s), you'd have a three and a half minute record and then they would just kind of do the hook over and over and over again; then fade it out."

And that may not be an entirely bad thing either. Hooks can be catchy but they can also be REALLY annoying -- think of that whistling in "Young Folks." Finding that balance is the mark of a good songwriter. We give the final word to an under-recognized master, Marshall Crenshaw. When asked in an email exchange what makes a good hook, he simply replied:

"For me it's one that engages me but doesn't cross the line and irritate me."

What are your favorites -- the hooks that achieve that balance for you? What are the most annoying? Let us know at therecord@npr.org.