Accessibility links
You Ask, We Answer: 'Parental Advisory' Labels -- The Criteria And The History : The Record The "Parental Advisory" label -- how it got there and what counts as "explicit content."

You Ask, We Answer: 'Parental Advisory' Labels -- The Criteria And The History

You Ask, We Answer: 'Parental Advisory' Labels — The Criteria And The History 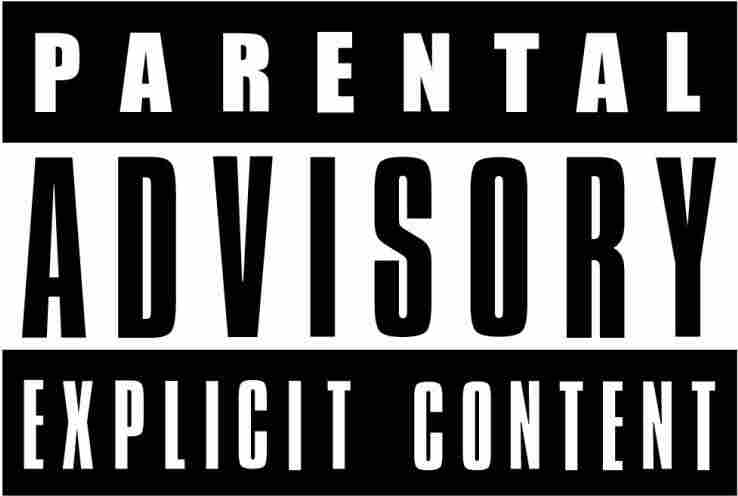 It's time once again to answer your questions about the music industry. This week's question comes from James Cross, who identifies himself as "Loud Rock Director" at WGDR-FM, a community radio station in Plainfield, Vermont:

"Exactly how much profanity merits a 'Parental Advisory' label on albums or 'Explicit' on songs? Who sets those rules and have they changed recently?"

Then he goes on to answer his own question:

"Just wanted to let you know, there is no rule on this. It is completely voluntary to put the PA sticker on a record. Maybe that's one of the ones you already knew though, haha.  Hope I helped!"

He's right. The record labeling system grew out of the Motion Picture Association of America (MPAA) movie rating system, which was launched in 1968. But there are significant differences between that effort and record labeling. For one, movie rating is de facto mandatory -- a filmmaker or distributor who releases a film that has not been submitted for a rating risks the consequences: many theater chains will not show un-rated movies. Films are rated by a panel of anonymous California parents.

Music is rated by the artists who make it and their labels. The Recording Industry Association of America (RIAA) calls it the "Parental Advisory Label Program" -- that's PAL for short. From the RIAA website:

"Individual record companies and artists decide which of their releases should receive a 'PAL Notice' indicating that the release contains explicit content."

But there's no specific definition of "explicit." The main criteria seem to be: strong language or depictions of violence, sex, or substance abuse.

The RIAA site then offers this caveat:

In other words, they tell you, or they don't.

This kind of self-regulation usually grows out of the threat of potentially more restrictive government regulation (a popular topic these days). That was true when the MPAA launched its movie ratings system and it's certainly true for music labeling.

The record industry first recognized a threat when the Parents Music Resource Center launched in April of 1985. The non-profit foundation got off the ground with $5000 from a musician -- Beach Boy Mike Love.  The founders were prominent Washington women including Mary (Tipper) Gore (then wife of Senator Al Gore).

"The PAL program is intended to balance the rights and interests of artists and consumers," says RIAA President Cary Sherman. "Artists have a first amendment right to express themselves, and consumers have a right to hear what those artists say. Consumers also should be warned when they might find some of the content objectionable. By asking the artist and the label to make that determination, we avoid any appearance of censorship by a 'board' or some music nanny. Instead, it's the artist and label who are advising listeners that they should be aware that some of the content may be objectionable. No artist wants to fool a consumer into buying an album she might find objectionable.

We've always believed that general guidance is the most appropriate standard. We shouldn't be classifying songs as "explicit" or not based on some application of arbitrary rules. I was just listening the other night to a James Taylor song that used the lyric 'my f***d-up family.' Does that make the song, indeed the entire album, explicit? Bright-line tests just don't work well in this situation."

It is obviously not possible to define each individual situation in which a record label or artist should determine that a sound recording contains PAL Content. In making such a determination, however, record labels and artists should consider:

1. that contemporary cultural morals and standards should be used in determining whether parents or guardians would find the sound recording suitable for children;

2. the context in which the material is used, as some words, phrases, sounds, or descriptions might be offensive to parents if spotlighted or emphasized, but might not offend if merely part of the background or a minimal part of the lyrics;

5. that such a determination requires sensitivity and common sense, and that context, frequency, and emphasis are obviously important; isolated or unintelligible references to certain material might be insufficient to warrant labeling a particular sound recording as containing PAL Content;

6. that these Standards apply to the case of a single track commercially released as well as to full albums (whether released in the form of a CD, cassette or any other configuration); and

7. that a sound recording may contain strong language or depictions of violence, sex, or substance abuse, yet due to other factors involved, may not merit a designation as containing PAL Content.

The Washington wives used their connections (PMRC's founders included wives of 10 Senators, 6 Representatives, and a Cabinet Secretary) to leverage their cause. And they had some leverage -- it seems there was a bill that the music industry very much wanted to get through Congress. H.R. 2911 proposed a tax on tape recorders and blank cassettes as a way of collecting royalties (most of which would go to the labels) to offset the claimed losses that would result from home taping.

Just five months after the PMRC launched, the RIAA announced that record labels would put advisories on albums. But the PMRC rejected the RIAA's olive branch, saying the industry proposal did not go far enough. The PMRC wanted all song lyrics printed on album covers; albums with explicit covers kept behind record store counters; and a requirement that labels reassess contracts with musicians who engaged in violent or sexually explicit behavior in concert.

The PMRC also proposed a rating system similar to the MPAA's:

Cary Sherman, the current President of the RIAA, was a lawyer at Arnold & Porter at the time.

"First, no "board" can determine what is the appropriate interpretation of a song and therefore how it should be rated," Sherman writes in an email. "It's up to the listener to decide the meaning of a song. Second, it's simply impractical to rate as many songs as are released in a given year. In 2009, there were 793 movies rated. That same year, there were over 97,000 albums, or over 1.2 million songs, released."

Nevertheless, the PMRC pushed for a panel of industry and consumer representatives -- similar to the MPAA ratings board -- to develop specific guidelines.

"The original proposal for a full blown ratings system was opposed by Frank Zappa and by a group I organized of managers, agents, PR people, artists and some label execs called The Musical Majority (a reference to the Moral Majority founded by televangelist Jerry Falwell),  which was created in association with the ACLU (American Civil Liberties Union)," says Danny Goldberg, who was then head of Gold Mountain Records.

"We felt that words did not lend themselves to a movie type rating system," Goldberg continues, "because different people would interpret what was 'violent,' etc., differently -- not to mention humor, irony, etc."

"I remember the PMRC complaining about the song 'Under the Blade' by Twisted Sister which they claimed was about rape," says Cary Sherman. "But the lead singer for the group, Dee Snider, testified that the PMRC was projecting its violent fantasies into his music, which was actually about the fear that a patient experiences on the operating table before surgery, and that the song was inspired by surgery that the band's drummer had to undergo."

Snider testified at a 5-hour hearing held by the Senate Commerce, Science and Transportation Committee on September 19, 1985. The hearing room was filled with TV cameras (all of the major networks were there). By most accounts, the most damaging testimony came from John Denver -- in support of freedom of expression. But much of the coverage went to Frank Zappa (the event was marked last month by the unveiling of a statue in his honor in his hometown, Baltimore) because his testimony was both, well, Zappaesque and cogent.

His full statement is part of the Congressional Record. Here's a choice bit:

"The PMRC promotes their program as a harmless type of consumer information service, providing 'guidelines' which will assist baffled parents in the determination of the 'suitability' of records listened to by 'very young children.' The methods they propose have several unfortunate side effects, not the least of which is the reduction of all American music, recorded and live, to the intellectual level of a Saturday morning cartoon show."

Less than two months after the Congressional hearing, the adversaries announced a compromise: albums could either bear the label "Explicit Lyrics - Parental Advisory" or, in lieu of that, have all of their lyrics printed on the back cover.

Several chains announced they would not carry stickered albums. Wal-Mart Stores, Sam's Club and Walmart.com (collectively "Wal-Mart") still operate under a policy that disallows recordings with the Parental Advisory Label.

"Overall, I don't think labels adversely effected sales," says Danny Goldberg, who now heads Gold Village Entertainment, an artist management company. "Since kids -- even before the Internet -- were able to get what they wanted. It ended up being a way for certain retailers like Wal-Mart to brand themselves as 'family friendly' -- at least to families who didn't like profanity on records."

The drama over record labeling moved from the national stage to statehouses. By 1990, nineteen states had considered some form of labeling legislation.

That same year the record companies announced a revised label: "Parental Advisory: Explicit Lyrics." Unlike the previous labels, it was to be a standard size; black and white; and always located on the bottom right-hand corner of a physical release.

The debate dragged on and Congress held more hearings in 1994. The result was a slightly revised label -- the one still in use 16 years later: "Parental Advisory: Explicit Content." The Senate followed with more hearings -- on violence in music -- in 1997 and 1998. The RIAA revised the guidelines for its members.

Today, "Parental Advisory: Explicit Content," is a fact of music-buying life. So it's perhaps hard to imagine what a big deal this fight was. The story was covered by the international media. Countless musicians, from Metallica to Sonic Youth to the Ramones to Ice-T recorded songs or produced album art criticizing the Parents Music Resource Center.

As for the PMRC, it's gone the way of record store chains.

Got a music industry mystery you want us to unravel? Send your questions to therecord@npr.org.