Accessibility links
Florida To Consider Pardoning Jim Morrison For Indecent Exposure : The Record On a hot night in '69, the Lizard King set off a mini riot. But it still isn't clear what happened. 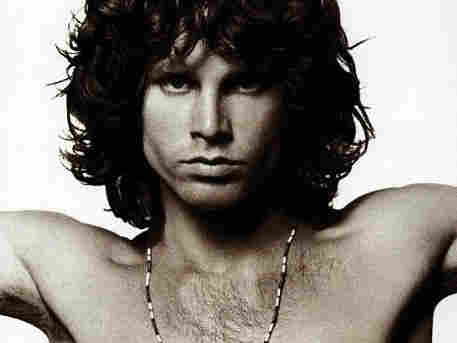 Jim Morrision on the cover of The Best Of The Doors. Courtesy of Rhino Records hide caption

UPDATE at 4:20 p.m. ET (12/9/2010): The Florida state clemency board has pardoned Jim Morrison of his conviction for indecent exposure and profanity during a concert in Miami in 1969.

In Tallahassee on Thursday, Florida Governor Charlie Crist will meet with other members of the state's clemency board to consider a pardon that would rewrite a page of rock 'n' roll history.

In 1969, after a concert in Miami, Doors singer Jim Morrison was arrested and charged with, among other things, profanity and indecent exposure. Doors fans and band members have long maintained Morrison was unfairly convicted.

Ray Manzarek, the Doors' keyboardist, says that March night 41 years ago was bizarre, even by the standards of Jim Morrison and The Doors. The band was playing Miami's Dinner Key Auditorium.

"The whole night was Tennessee Williams' night. It was hot," Manzarek says. He says more than 12,000 people were packed into an auditorium that held 7,000.

"And you could feel onstage a strange vibration," he says. "Strange Southern swamp. The Lizard King was coming back home. And the people knew it and they were expecting something. And they got it."

On that night in Miami, Morrison was drunk. And he was freely mixing in his poetry with the music. In the radio piece above you can hear audiotape of the hour-long concert that captures the excitement and chaos of the evening.

In the middle of the song, "Touch Me," an incident occurred that would change the Doors' career and confirm what many adults and authority figures suspected -- that Jim Morrison, and rock 'n' roll, were corrupting influences on America's youth.

The concert ended when members of the audience stormed the stage.

A few days later, an article in the Miami Herald drew the attention of authorities, saying Morrison exposed himself to the audience. Law enforcement authorities held a news conference in which they announced they were issuing a warrant for his arrest.

Morrison returned to Miami several months later for the trial. In court he admitted to using profanity but denied ever exposing himself. Prosecutors produced witnesses who said they were at the concert and saw Morrison pull down his pants.

In an interview with Miami station WTVJ, Morrison said artistic expression was on trial.

"I'm not personally that convinced that nudity is always a necessary part of a play or film," he said. "But an artist should feel free to use it if he feels like it."

The jury found Morrison guilty of misdemeanor charges of profanity and indecent exposure. His lawyer immediately appealed, but the damage was done.

The Miami concert was to be the first stop on a 20-city tour. The tour was cancelled. Doors manager Bill Siddons says for Morrison and the band, it was a turning point.

"It ruined their career," Siddons says. "It ruined Jim's life. He never really recovered from it. He really stopped caring about that work anymore and in fact, retired shortly thereafter." Morrison's conviction was on appeal when he died in Paris in 1971.

But as '60s-era controversies often do, this one lingered. Fans and Morrison's friends and bandmates felt an injustice had been done. A few years ago, they began to petition Governor Charlie Crist for a pardon. And now, with just weeks left in his term as governor, Crist said on MSNBC he's been convinced.

"The more I looked into the case," Crist said, "the more briefings I got about Jim Morrison and what happened that evening, the less and the more flimsy the evidence appeared to be."

Morrison supporters note that none of the many photos taken at the concert showed him exposing himself. And for 41 years, those closest to him on stage -- his bandmates like Manzarek -- have steadfastly maintained it never happened.

"I think it was a mass hallucination," Manzarek says. "He told the audience he was going to do it. And I think they saw it. They saw what they needed to see on a strange, hot Southern night."