Accessibility links
Billboard's 100 Biggest Songs Of 2010 : The Record Almost a quarter of Billboard's Hot 100 of the year are songs about partying. 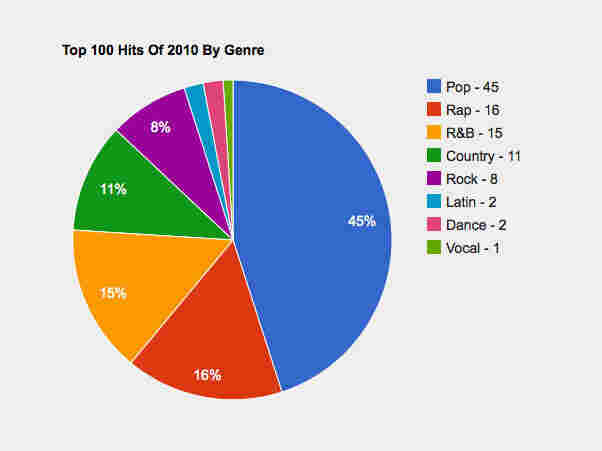 To be fair, they're all pop, right? hide caption

You can always count on Billboard for a massive end-of-the-year package. The industry magazine rounds up over 100 lists of the top artists, albums and songs of the year in categories that range from pop to smooth jazz to ringtones. In their accompanying article, the magazine identifies 2010 as the year that synth-driven pop came to dominate the pop charts. That's a difficult proposition to argue against (see Ke$ha, Black Eyed Peas, Katy Perry, Usher, Gaga, et al.), but it's also just the first of many conclusions you can draw from this nearly inexhaustible fount of data.

Fully a quarter of the songs that people bought and heard the most in 2010 revolved around partying. Have we been trying to forget the recession? Did the fixation extend across genres? And who is writing all these songs? I dove deep into the chart Billboard released late last week and came up with the answers to those questions along with more discoveries I couldn't help but notice.

1. 2010 was the year of Dr. Luke
We talked about Lukasz Gottwald's domination of the pop charts earlier this year, so it should be no surprise that the songwriter and producer is a bigger presence on the list than any other artist. He rode the wave of synth-driven pop better than anyone else, unless it rode him. Nearly one out of every ten songs on the list has a Dr. Luke credit, starting with four of Ke$ha's five hits, plus songs by Katy Perry, Taio Cruz, Miley Cyrus and 3OH!3 and B.o.B's collaboration with Rivers Cuomo.

Luke's friends kept him company at the top of the pop heap, sort of an Apatovian cabal of producers and songwriters, except with buzzy guitars and handclap beats instead of pot jokes and life lessons for immature men. Producer Benny Blanco collaborated with Gottwald on six songs, and had three on his own. Swedish songwriting wizard Max Martin, who has been a chart fixture since the days when he was writing and producing huge hits for Britney Spears and the Backstreet Boys, worked on three of Dr. Luke's songs, and wrote and produced three more with Karl Schuster, another collaborator known as Shellback.

2. 2010 was the year of the "dance" song
Maybe more precisely, 2010 was the year that dance songs became pop songs, or the year pop songs started talking about dancing. 26 songs in the list contain references to dancing, or a DJ, or being "in the club" or getting "on the floor." R&B stars like Usher and rappers like the Black Eyed Peas had huge hits that touted their dance-floor credentials relentlessly ("Dance like it's the last night of your life," goes a line from Usher's "DJ Got Us Fallin' In Love"). The French DJ David Guetta had a hand in four hits, two with the Black Eyed Peas.

3. 2010 was the year of "popping bottles"
Maybe everyone wanted a piece of the Black Eyed Peas magic. Maybe it was the influence of Mad Men. Maybe it was (as the blog American Drink suggested last week) a nation in the grips of recession trying to forget their worries. But songs on the radio in 2010 loved alcohol. Of the top 100 songs this year, 21 contain lyrical references to drinking or getting drunk.

Trey Songz's lewd-ish pair "Say Aah" and "Bottoms Up" picked up the baton from Jamie Foxx's "Blame It On The Alcohol" in preemptively forgiving listeners for their bad behavior. Far East Movement's "Like A G6" could have been a Four Loko commercial. Lady Antebellum's "Need You Now" was basically a heartfelt drunk dial. But only only one act could rival the Black Eyed Peas when it came to party-endorsing.

Yep, the crossover between the dance floor and drinking themes found its epitome in the figure who had the biggest hit of the year: Ke$ha. I wouldn't have predicted the mush-mouthed California singer as the avatar of our recessionary woes, though her suggestion to have "a slumber party in [her] basement" is admittedly more frugal than the average bottle-service R&B blackout jam. But Dr. Luke saw the potential in advancing a pop star who even her supporters would call "dumb."

4. If you had a hit in 2010, you're likely featured in the credits of My Beautiful Dark Twisted Fantasy
Kanye West, who, by any reasonable account, has the best-reviewed album of the year, shows up as a featured guest on just one song in the top 100 and as a producer on two more. But West knows how to mine the charts for collaborators. The notoriously stacked credits for his song "All Of The Lights," feature musicians who played, sang, produced or wrote on 20 songs that made the list. (Listen hard for Fergie, Rihanna, La Roux's Elly Jackson, The-Dream and Drake).

Other trends, based solely on information available in Wikipedia and a single listen to all 100 songs via a YouTube playlist:

There's plenty more we missed, but at a certain point you have to step away from the computer. If you find any other trends we should know about, let us know in the comments.