Accessibility links
The Worst Ideas Of 2010: Ping : The Record Apple doesn't want to share, so the company's music-focused social network is floundering. 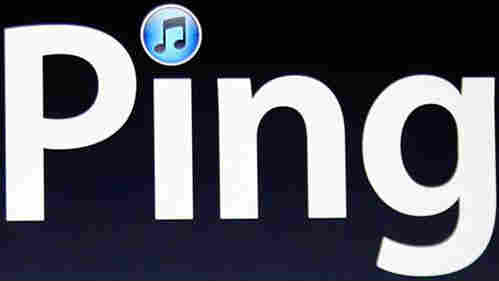 All week we'll be talking about the best and worst ideas in music this year — click here to see all the stories. Write us at therecord@npr.org if anything in the business or culture struck you as particularly effective or shockingly misguided in 2010.

This fall Apple music launched a music-focused social network called Ping. The day Steve Jobs made the announcement, tech writers began sounding the death knell for MySpace. But it was not to be. Why Ping is floundering can be summed up in a sentence: Apple doesn't like sharing, thus, it is difficult for them to build a social network.

The most popular services -- the Facebooks, Twitters and MySpaces of the world -- allow users to share links, thoughts, ideas, photos and music to connect with each other. Ping, run through iTunes, was supposed to be an evolution in musical connection. But iTunes, being a self-contained fortress requiring endless software upgrades and with more than a few frustrating quirks, isn't conducive to the type of sharing Web-based networks enjoy across a variety of devices. I can access all three of the aforementioned sites from my Android phone, and I have a variety of apps that allow me to seamlessly integrate these applications into my life. To use Ping, I would have to be tethered to my iMac.

Riddle me this: How did the Apple crew create a social networking site for music way back in September, but only introduce a way to swap playlists four months later? Considering how important playlists are to the organization of a healthy music collection, one would imagine that type of functionality would have been ready at launch. But don't let the new functionality fool you -- Ping restricts even this sharing to songs that already appear in the iTunes store. That great band you saw in concert and bought their $10 CD? They don't make the cut.  Picked up a love for k-pop sensation 2NE1 from a semester abroad in Korea? You'll need to write that information into your profile.

The issues with Ping extend to more than just functionality. Consumers are now accustomed to services like blip.fm, last.fm and Pandora, all of which allow you to listen to songs in full, find similar artists, and share your playlists or created radio stations. But Apple crashed in, deciding that people need what is essentially a glorified purchasing guide as opposed to a space to share music.

The best social networks adapt to users -- Twitter, after seeing its users place an RT before another user's name and comment, eventually created a button to make retweeting easier, though they seem to have missed the need to include additional comments (though third party developers like Twidroid built that functionality into their offerings). Apple is less interested in adapting to user behavior and feedback and more interest in controlling use and maximizing sales at all costs. Apple's shifting stance on digital rights management (DRM) is a major piece of this puzzle.

Ars Technica has argued "DRM's sole purpose is to maximize revenues by minimizing your rights and selling them back to you." Apple excels at this. A report from the Electronic Frontier Foundation, called "The Customer is Always Wrong: A User's Guide to DRM in Online Music," breaks it down even further:

Imagine if Tower Records sold you a CD, but then, a few months later, knocked on your door and replaced the CD with one that you can't play in your car. Would you still feel like you owned the CD? Not so much, eh?

But Apple reserves the right to change at any time what you can do with the music you purchase at the iTunes Music Store. For instance, in April 2004, Apple decided to modify the DRM so people could burn the same playlist only 7 times, down from 10. How much further will the service restrict your ability to make legal personal copies of your own music? Only Apple knows.

After the report was written, Apple began offering DRM-free MP3 downloads of their music -- for an additional cost. Apple, as a company, values innovation and prides itself on anticipating people's wants -- but only to a point. To share the perfect song with someone using Ping is impossible; randomly chosen 90-second clips are not what song dedications are made of. My friend can allow me to listen all 3:47 of the same Slum Village song she's spinning by blipping her Facebook account. I can't use Ping to do that. 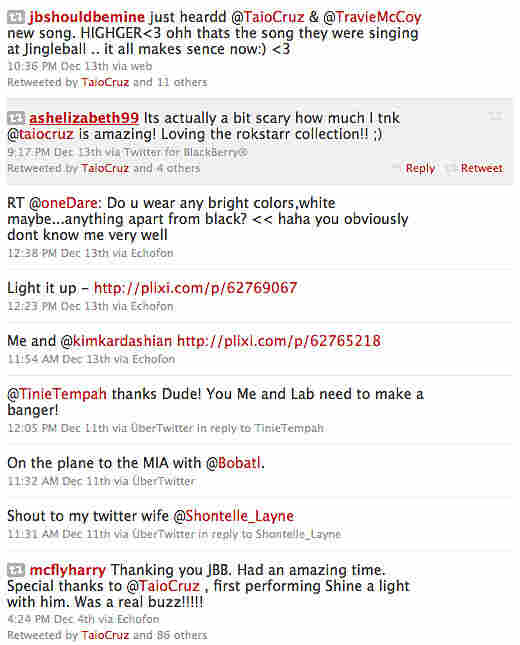 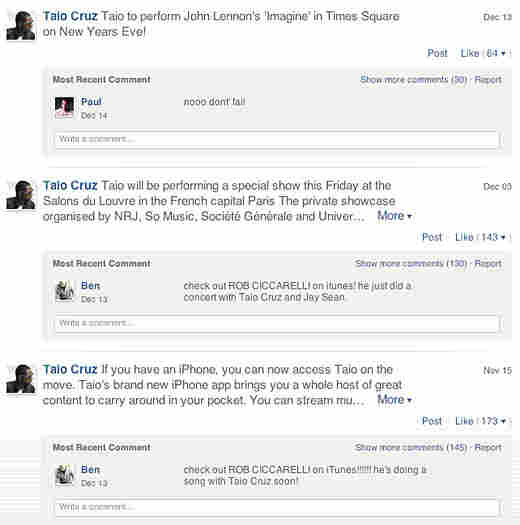 Notice that Cruz uses his social networking profile on Twitter as most celebrities do: to broadcast thoughts, talk to fans and other celebs. On Ping? It's another way to move units, not connect with people.

UPDATE at 6:30pm (12/21/2010):  Astute readers have mentioned that Apple's iTunes music store has been DRM free since last year, and much of their initial embrace of DRM was at the insistence of music labels. I should have made that more explicit in the piece, as the Ars Technica article was from 2007.  However, as the DRM attached to song files by labels has mostly disappeared, Apple has doubled its efforts elsewhere to control how and what its users are permitted to access, much less share. Apple's most recent terms and conditions state: