Accessibility links
The Best/Worst Ideas Of 2010: Reverse Sticker Shock : The Record Amazon sold hundreds of albums for $3.99, pushing the question of music's value into the spotlight. 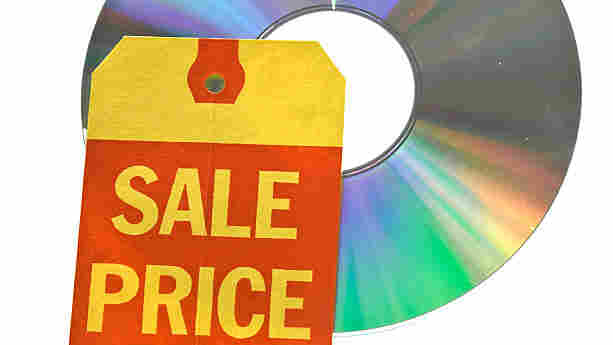 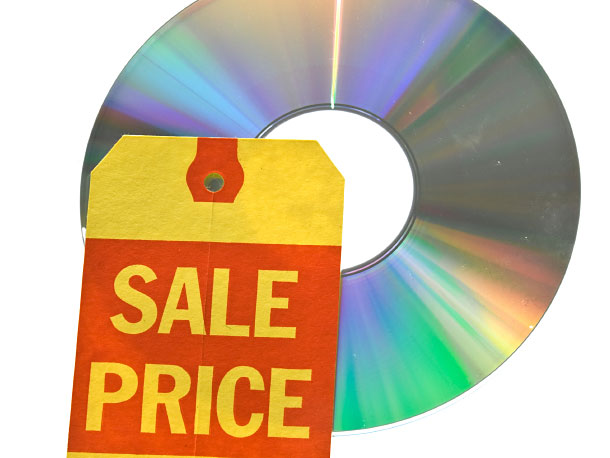 It's not a good time to be in the business of selling music.

That much should be no surprise. Subtle signs point to the fact that some in the industry have moved on from the concept of exchanging dollars for discs or downloads. The conversation in the industry has moved to discussions of "The Cloud" and subscription services and how to monetize streaming content (on a related note, the Los Angeles Times reported last night that the non-profit group SoundExchange would dish out more than $250 million dollars in streaming royalties in 2010).

So maybe it's no surprise that the biggest story in music sales this year was the machete one online retailer took to album prices. Amazon.com's daily deal: an album each day, set at the low low price of $3.99. Was it good or bad for music?

Other retailers have offered discounted albums, but Amazon's price is low enough as to seemingly rebut an excuse proffered by file-sharers a decade ago -- what's the justice in forking over $18.99 when you only want a couple of songs on a CD? -- years after the argument was lost. But the gambit can be read as a concession that the industry has all but abandoned selling music or as a sign that that same industry will do anything it can to get people into stores as long as they part with some cash, no matter how small the amount.

Either way, no other story pinned the question of music's value to the table so strongly.

It took a decade for us to get here. Back in 1999 and 2000, the industry's salad-iest days, consumers bought just under a billion CDs a year, at prices that crept toward $20 per disc. Ten years later, that total is off by 60%; last year total album sales were 374 million. This year, that figure will drop another 13%. (All the statistics here come from Nielsen SoundScan unless otherwise credited.)

For a few years in the middle of this decade, stratospheric growth in digital sales helped to make up some of that gap. But it never made up for the dip in CD sales, and this year growth flatlined. After growing just 8% in 2009, digital track sales in 2010 are up just 1%.

That a sense of desperation might set in, causing otherwise sane retailers to slash the price of an album, is understandable. Let's be clear -- because Amazon sells these $3.99 albums at a loss, the musicians and labels make the same amount of money they would if the price was two or three times as high. Amazon's gamble is that low prices will attract buyers away from iTunes, but according to a report from the research group NPD Group, as quoted in the Wall Street Journal, their efforts this year didn't cut into Apple's dominance of the digital download market.

A spokesperson for Amazon confirms that "daily deals" are selected by Amazon's editorial staff, based on "what we think will resonate with customers. We're choosing things we think our customers will want to hear."

In a few instances, the ploy seemed to work wonders. Both of the indie albums to top the Billboard chart in 2010 --  Arcade Fire's The Suburbs and Vampire Weekend's Contra -- were priced by Amazon at $3.99 in their first week of sales. As The New York Times reported at the time, digital downloads accounted for 62% of sales of The Suburbs.

But as the gimmick caught on as a way to push sales numbers higher, it caused hand-wringing among those musicians whose work would get discounted.

The Seattle group Fleet Foxes, who spent this year recording their second album, set off a good-natured but telling back-and-forth with Amazon mp3's representative on Twitter when it posted a comment that read: "Been working for nine months on something that will sell for 3.99 on Amazon MP3. That's about the price of a whoopie cushion."

Asthmatic Kitty, the label that released Sufjan Stevens' The Age of Adz, responded to the promise of the discount with more angst. "We have mixed feelings about discounted pricing," the label wrote in an email to fans who had purchased Stevens' previous EP. "But we also feel like the work that our artists produce is worth more than a cost of a latte. We value the skill, love, and time they've put into making their records. And we feel that our work too, in promotion and distribution, is also valuable and worthwhile."

In an interview with the Village Voice, Asthmatic Kitty's Michael Kaufmann later said that the email was an attempt to make the label's position clear, not to shame fans into buying at a higher price:

We wanted to be honest and transparent about the coming deal so that folks who preordered at a higher price didn't feel like they have been misinformed, or had a lack of information to make an informed choice.

What we wanted to do was provide choices. And in the process we thought it would be an interesting opportunity to give food for thought on the perceived worth (or value) of an album. But that discussion should have taken place in a different context. The intent was certainly not to criticize of Amazon's approach. Rather, we hoped to spark conversation and examination of our methods of doing business real time with our customers.

It'll take a while to see to what extent Amazon's incentive translates to widespread expectation. But for now, those arguing over whether or not the experiment will save music or hasten its death can use a single record to support either pitch. When Kanye West's My Beautiful Dark Twisted Fantasy debuted in November, it sold almost half a million copies in its first week, after a highly publicized stint at $3.99 (for a few days, thanks to a coupon, you could actually get the album for $0.99). The next week, that total dipped by 78%, to 108,000 copies. Last week, it fell out of the top ten entirely.

That collapse suggests that many of West's fans were convinced to pony up only at a lower price. But in the week the album was released, other stats from Billboard and SoundScan suggest that getting people into retailers for West's album trickled down to help the industry as a whole. Sales for the week were down only 5% over the same week in 2009 (a significant improvement over the rest of the year, down 13%). Digital track sales, stalled for the rest of the year, jumped 12%.

As with everything else about this story, good news and bad are two sides of the same disc -- er, digital file?