Accessibility links
'For Promotional Use Only — Not For Resale' — Oh Yes It Is : The Record A federal appeals court has ruled that so-called "promo" recordings can be resold.

'For Promotional Use Only — Not For Resale' — Oh Yes It Is

'For Promotional Use Only — Not For Resale' — Oh Yes It Is 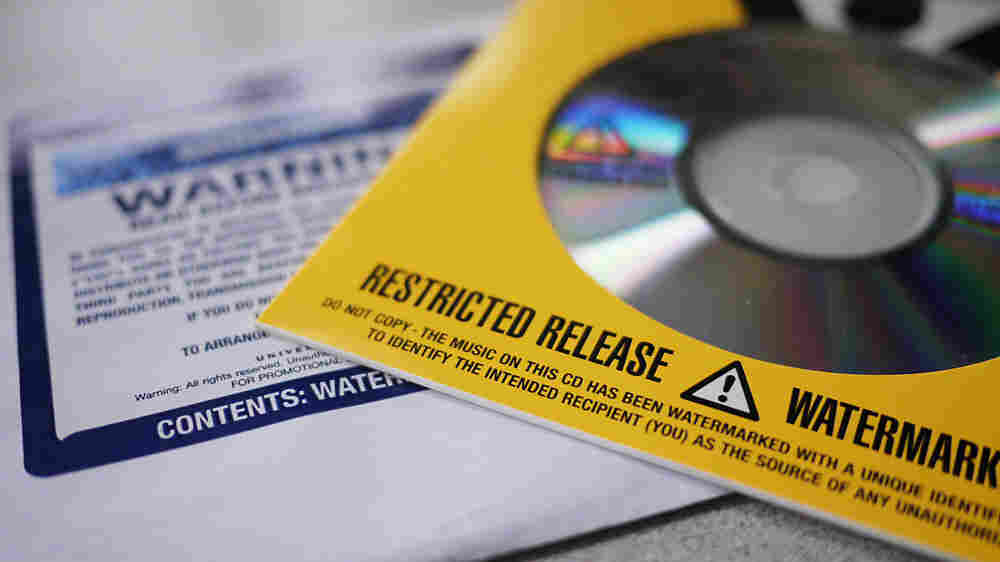 Look for more of these on eBay and in your local used CD store. Claire O'Neill for NPR hide caption 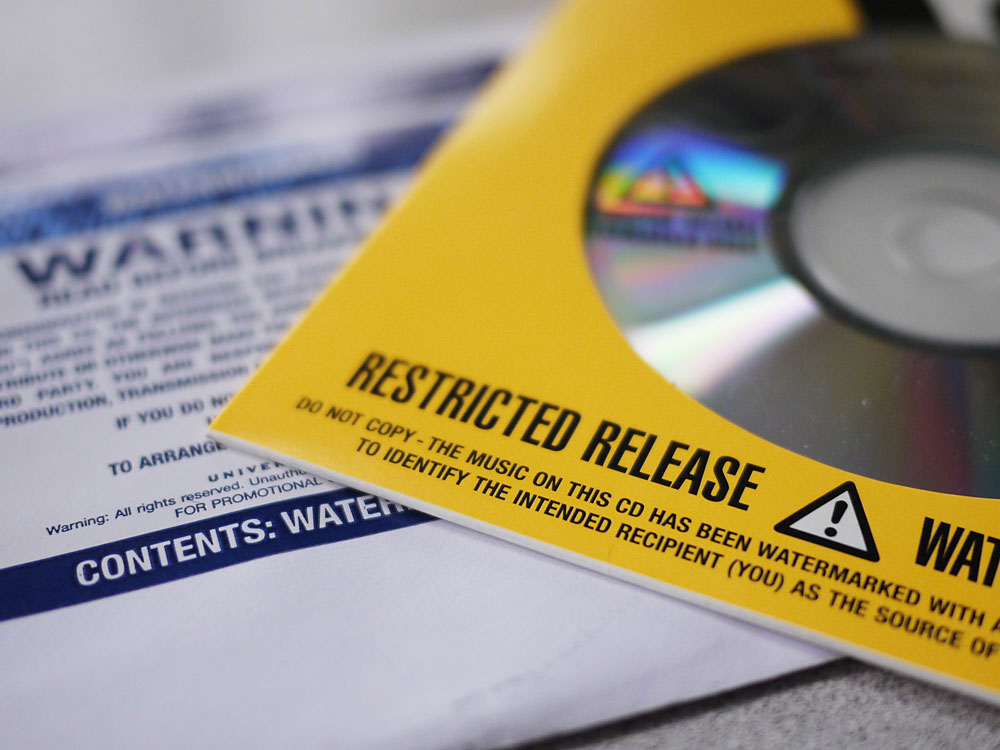 Look for more of these on eBay and in your local used CD store.

Ever gone into a used record store and picked up a CD or LP with this stamped on the cover: "For Promotional Use Only — Not For Resale?" You wanted to buy it but you had a creepy feeling you might be participating in some kind of shady transaction — possibly even illegal. Turns out you weren't.

This week, the Ninth Circuit Court of Appeals in San Francisco upheld a lower court's decision that the sale of so-called promo records — usually advance copies of new releases sent to music critics and radio stations by record labels — does NOT violate copyright laws.

That's good news for folks like Jim DeRogatis, who's been writing about music since 1984 and whose vast collection includes, he estimates, 10,000 promos. That doesn't include the ones he's dumped.

"Most of what they send you is junk — they rarely send you the releases you need to write about. Have you ever tried to donate this crap?"

I haven't — nor have I ever sold a promo precisely because I was uncomfortable with the idea of benefiting financially from something that was provided gratis as part of my job. But I've been lucky enough to have a full-time job since I was 20. Freelance music critics are in a different boat.

"Lester Bangs famously lived off promo sales — he wrote about it," says DeRogatis, who wrote a book about Bangs called, Let It Blurt: The Life and Times of Lester Bangs, America's Greatest Rock Critic. "Back in those days (the 1970s and early '80s), rock critics ate their best meals at label parties. If they didn't sell promos, they didn't eat the rest of the time."

The UMG vs. Augusto case, after the jump.

The defendant in UMG vs. Augusto, the case in which the Ninth Circuit ruled this week is not unlike those old rock critics. UMG stands for Universal Music Group; Augusto is Troy Augusto. Universal first filed suit against the California resident in 2007. The Electronic Frontier Foundation took up his case and EFF's Senior Staff Attorney Fred von Lohman was one of his lawyers. He described what Augusto did to get in trouble to NPR's On the Media in 2007:

"Troy Augusto makes his living basically doing the age-old thing. He buys low and he sells high. He goes to Los Angeles-area record stores, he finds CDs that he recognizes as being collectable, valuable to a certain set of fans, picks those up and resells them on eBay for, he hopes, a profit. And it appears that major record labels — not just Universal — they object to certain promotional CDs being resold. For those auctions on eBay, the labels will send notices to eBay to try to stop those auctions. And Mr. Augusto has, to his credit, stood up for his rights and said, hey, I'm entitled to sell these. I own them. I bought them fair and square. You guys gave them away. The First Sale Doctrine ought to apply."

The First Sale Doctrine. If the phrase makes your eyes glaze over, von Lohman was succinct in laying out why you should care:

"First Sale is incredibly important if you believe in things like libraries and used-book stores."

In a nutshell, First Sale means that if you legally acquire a book or recording, you can do anything you want with it except copy it — you can loan or give it to your Mom; donate it to a library; sell it to a friend or to a used book or record store. It's what allows you to borrow a book from a library. It's something that copyright holders like publishers and record labels have always despised because stuff is changing hands for free that could be generating sales.

First Sale Doctrine was first established by the U.S. Supreme Court in 1908 and codified by Congress the following year. The Supreme Court case was Bobbs-Merrill Co. v. Straus — in which publisher Bobbs-Merrill brought suit against the Straus brothers, partners in the R.H. Macy & Company department store, for selling copies of a book called The Castaway for less than what Bobbs-Merrill had stipulated under its copyright notice on an inside page. The Supreme Court ruled that Macy's had bought copies of the book legally from a distributor and could therefore sell what was now its property for whatever it wanted.

UMG's case hinged on proving that it still owned the promo CDs. John T. Mitchell, an attorney practicing in Washington, D.C., who is outside general counsel for the National Association of Recording Merchandisers, the trade association that advocates for the interests of brick-and-mortar and online music retailers and wholesalers, says the court rejected Universal's argument that, " 'These CDs are not to be sold because we still own them, even though we've not really done anything to suggest ownership. We're not giving you a self-addressed, stamped envelope to return it to us when you're done. We're not reflecting them on our books as part of our personal property. We're not treating it in any way as our property, we're just calling it our property.' "

Mitchell goes on to say, "It was very clear that UMG had no interest in getting the CDs back. In fact in those cases where it did, the court noted that it was to destroy them, not to get any ownership value out of them."

In other words, just like that haiku, a book or a CD is the copy of a copyrighted work and once you've legally acquired that copy, you can sell it.

So the Ninth Circuit viewed the receipt of an unsolicited promotional CD as legal acquisition, despite the caveat, "For Promotional Use Only — Not For Resale." In addition to considering whether UMG really meant to retain ownership, the court also relied on another law: the Unordered Merchandise Statute, which basically says that you can send free samples through the mail but if you're sending something unsolicited through the mail, the recipient can treat it as they like.

Sherwin Siy, deputy legal director of Public Knowledge, a Washington, D.C.-based public interest group, says, "If you're trying to send me something through the mail — and I haven't asked for it — once I get it, I can use it; discard it; dispose of it however I want regardless of what conditions you want to put on it. The idea is really to keep people from sending people merchandise and then charging them for it later. So it's yours and the way the court read that is: that means you're pretty much the owner and whatever that owner decides to do with that then, they can dispose of it as they like — they can give it away; they can sell it. And that's how it can get into the hands of somebody like Mr. Augusto."

Siy says the court also rejected the idea that, by accepting a promotional CD, you've agreed to the terms and conditions printed on it. "The court says, 'Well, there's no way that acceptance is communicated.' That this silence on the part of the recipient — and there's been no evidence in this case that anybody who received the CD wrote back to Universal and said, 'Hey! Thanks for the CD. I agree to your terms' — you can't treat silence as agreement."

Legalities and financial realities aside, there are the ethics of selling something you got for free as part of your job.

Music journalist DeRogatis remembers when he was writing for a major music publication in the mid-'90s.

"One of the most distressing spectacles I've ever seen in a quarter century of writing record reviews — and getting promos — happened when I worked for Rolling Stone. About once a week, a guy from suburban New Jersey would come through the offices with a hand truck and a wad of cash. He'd leave with three or four mail bins stuffed with promos after peeling off bills and giving them to the editors. It was despicable! They were selling off somebody's life blood! Promos come out of a musician's recoupable expenses, along with everything else the label can charge to the artist: paper clips, staples. Madonna doesn't need the money but smaller artists do."

One final note. The Ninth Circuit ruled in September that similar implied licenses on software — so-called end user license agreements, or EULAs, that software is licensed for the customer's personal use subject to certain conditions, not sold — do prohibit resale. But that's another story.

A previous version of this story misspelled Sherwin Siy's last name as Sly.