Accessibility links
Doing It Live: No Age : The Record The Los Angeles punk duo answers our questions about touring and recommends their favorite minivan. 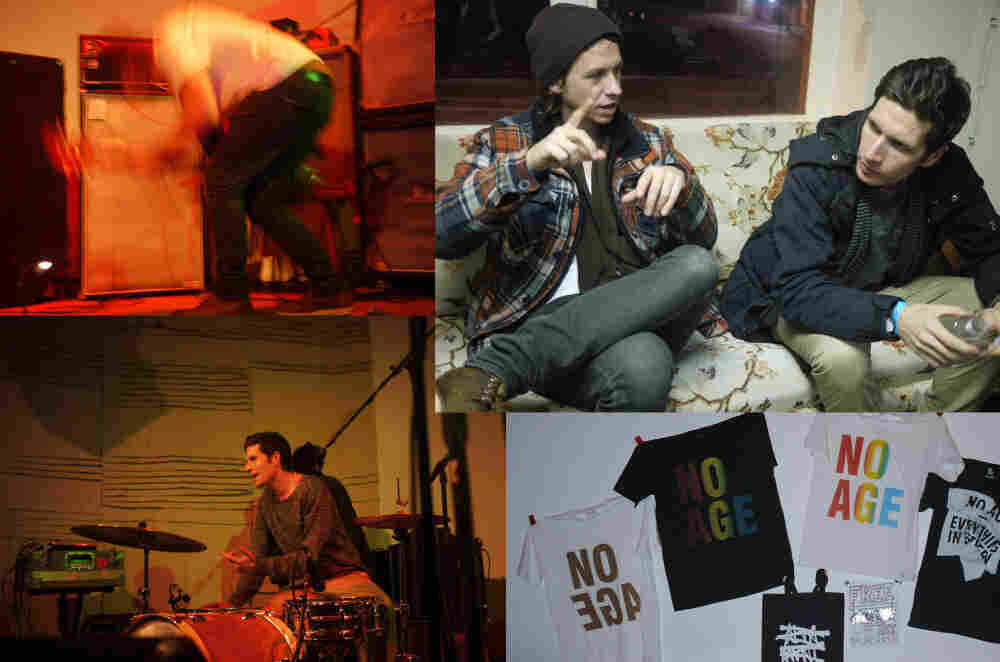 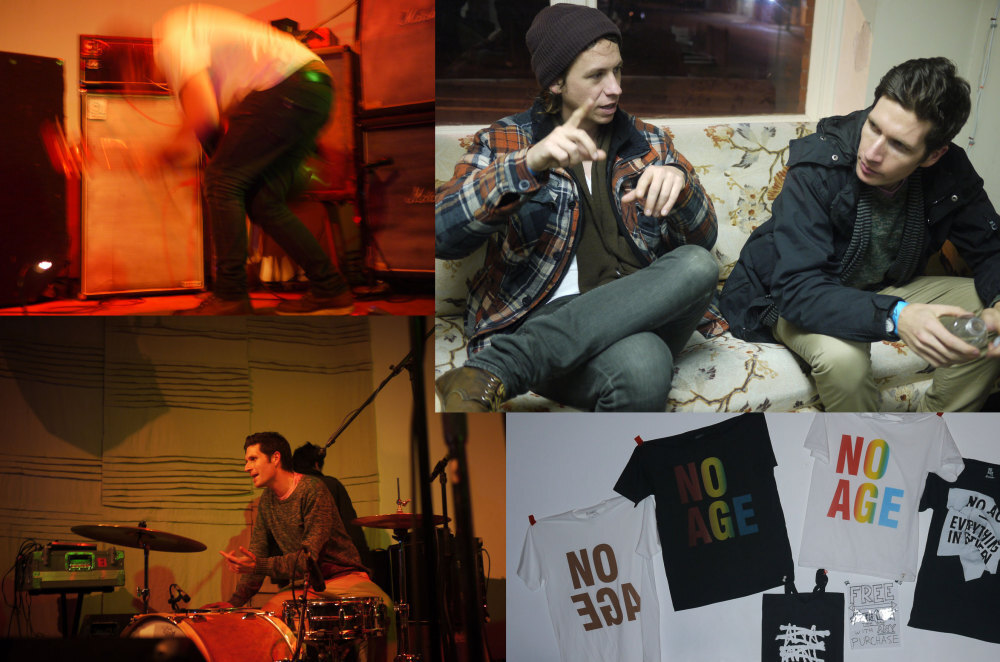 No Age at Portland's Holocene on November 23, 2010. Clockwise from upper left: Randy Randall (with guitar), Randall (left) and Dean Spunt at Marriage Records, No Age merchandise, Spunt behind the drum kit.

It's not surprising that a band that starts out so singularly associated with a particular venue will eventually branch out. They build an audience, they hit the road, they play bigger rooms. You can't reasonably expect the Ramones to play every show at CBGB, but when they roll into your town, you hope they bring a little of CBGB with them.

The guitar/drums duo No Age, from Los Angeles, is maybe the most accomplished band to break out of a young scene centered on The Smell, an all-ages venue in downtown L.A. No Age's roots are in punk, and from the band's start, the focus has been on the energy the pair — Dean Spunt on drums and vocals, Randy Randall on guitars — generates, and on the woozy balance between noise and beauty that they're able to sustain.

Last September, the band put out their third album, Everything In Between, on Sub Pop Records, a few days after launching a massive tour. In late November, after dates in Europe and Canada, after opening for Pavement at the Hollywood Bowl in their home town, No Age played a show at Holocene, a bar/art space/venue in Portland, Ore. Holocene isn't usually an all-ages venue, but because Spunt and Randall don't like to play shows with age restrictions, the promoters roped off the bar and allowed whole families to enter. When you see No Age, you get a little whiff of The Smell.

Before the show, I sat down with Spunt and Randall in the offices of Marriage Records, just across the street from Holocene, to ask the pair our set of questions for touring bands about food, music, money and life on the road.

Where did you play last night? Where/when did you wake up this morning?
Dean Spunt: We played in Vancouver, B.C. yesterday.
Randy Randall: Toronto?
DS: No, not Toronto. [Laughs] And we woke up in Ferndale, Washington at about 10:00.

What's the first thing you look for when you get to a new city?
DS: I know the answer to that question: vegan food. A vegan restaurant or a health food store.

I bet that sort of thing is easier to find in Portland than in most places.
RR: Yeah, tonight we went to 12th and Hawthorne in Southeast Portland — and for those of you who haven't been there, it's filled with amazing food carts. There's a fry cart, pizza cart, burrito cart, crepe cart .... Which one am I missing? Is it a coffee cart?
DS: No, it's like BBQ sandwiches. I don't think it was very vegetarian friendly.
RR: But most of the carts have vegan options. 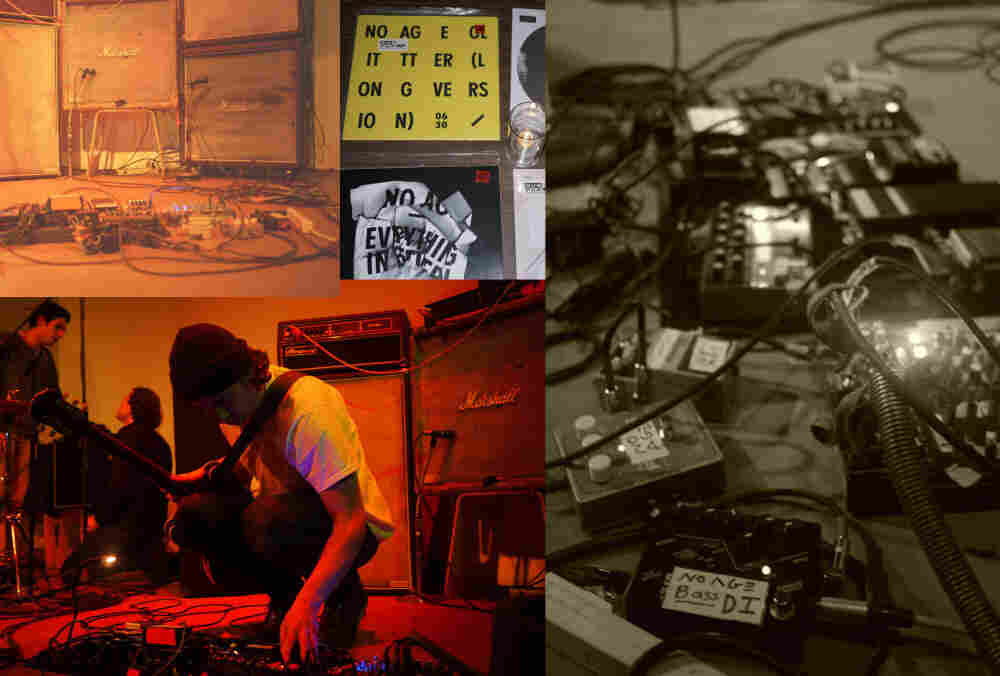 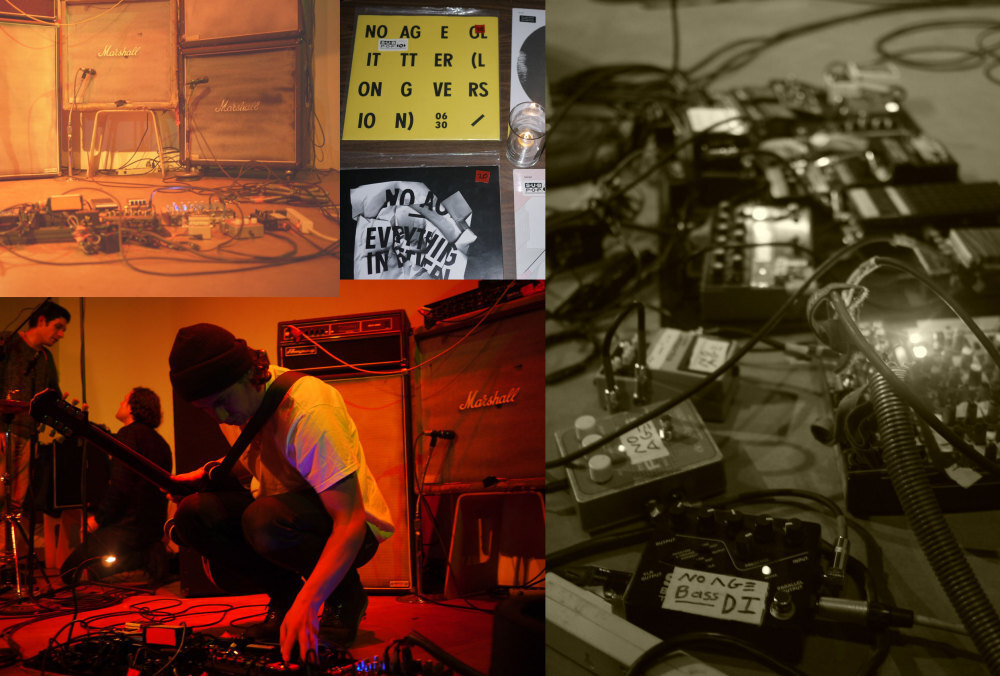 No Age at Portland's Holocene.

Doing It Live: The Body, A Choir And A Church

Do you have any pre-show rituals?
RR: Not really. This tour I've been experiencing some numbness in my hand, so I try to stretch out a little bit. I think when I get home from tour I'm going to go see a doctor. Because something's not working right.
DS: I usually have to pee, so I usually find a place to pee. Most of the time we're back stage and sometimes there's not a bathroom so I have to find a place to, uh, figure it out. Go stealth. Go rogue.
RR: The last thing I do before I go onstage is try to find Dean, so I don't go up there and have ten minutes to myself.

Is there a song you know will kill?
DS: Yeah. "Teen Creeps" [from Nouns]. Or "Fever Dreaming" and "Chem Trails" [from Everything In Between] on this tour.
RR: For me it's sort of hard to tell. I'm never quite sure when it works. I try to pay attention but I get lost sometimes and can't quite tell what's killing and what's not.
DS: A song like "Teen Creeps" or "Everybody's Down," you know those are going to slay, so maybe you don't play those first. Although, we do.
RR: For this tour we have a consistent set list. We have a third person [playing] samples and it helps to keep him on track, and our friend Michael Reich is doing video so he has a thing that needs to be timed up with every song, so it helps if it's the same set every night with minimal changes. You't think I'd remember since we've been playing it, but I still like to write out a set list.

What's the best advice you ever got from someone on tour?
RR: "Read Get In The Van." Jared Silberman from Young People — before we ever did a U.S. tour — said, "The one thing you need to do is read Henry Rollins' Get In The Van. And it'll prepare you for life on tour."

Who is the first person you make friends with at a venue?
RR: Whoever we can. We try to find a friendly face where ever we can. There's no one in particular, whoever meets us.
DS: I was thinking the person we make enemies with, before we had a sound guy, was the sound guy. We'd show up and they'd be, "Oh, you want to put the drums at the front of the stage, you want to play on the floor, you're loud." One time we played in London and the sound guy was so frustrated, he was like — do you mind if I cuss? — he said, "You've got to f---in' turn your s--- down!"
RR: "If you don't turn your s--- down I'm going to leave!" And we were just like, "Okay, if you leave, can you just leave all the faders all the way up?" Sometimes, before we even make a sound, just rolling in with all the amps and cabs, you can see the look on the sound guy's face.
DS: Anything that seems untraditional.
RR: I think a lot of people get set in the ways when they work at a venue. And understandably. You're there every night, day in and day out. and we're just another band coming through. But as a band, that's your night, your chance to make something really special. That's not to say there's not amazing venues where there are people who are really psyched for the shows to happen, but you can run into the person who is burned out from being at shows every night because they work at a venue. And they're not necessarily on your side to make that night any different than any other night.

How did you get to the venue?
DS: We drove. A Mercedes. I'm not even kidding. It's like a big sprinter van. We've toured mainly in a minivan. This last tour in Europe and this tour we've had those tall work vans. They're comfortable, but the seats don't recline.
RR: For many years we figured out that the Dodge Grand Caravan --
DS: — or Plymouth Caravan. Same thing.
RR: It has a little extra — like 11 inches — extra loading room in the back. This is the part where it turns into a commercial, but it does have the stow-and-go seating as well, so you can throw all your records and stuff you don't want to get stolen — you can hide it literally under the floor.
DS: We had that thing dialed. Every centimeter was packed tight with stuff, but it was perfect for four people.

Do you drive during the day or night?
DS: Both
RR: If we can do a couple of hours right after the gig, we'll drive, and see how far we can get. Because after the show you're "up." It makes sense to do a little driving.

Do you have day jobs apart from music?
DS: I run a small record label, but it's kind of all intertwined.
RR: No.

How much of your total income comes from touring?
DS: I'd say 90 percent. Maybe 80 percent.
RR: I'm trying to figure what else we do.
Nothing from record sales?
DS: Nah.

Do you get money from the label to tour?
RR: No. We've never asked for it. I think that maybe it's an option.
DS: It's definitely an option. They've asked us, "Do you need any money?" "No, we're good." "You sure?" "Yeah, we're fine." Taking that money from someone to owe it back, I feel like that's weird.
RR: It's up to us to make the tours make money. I don't know. It comes from our background. You just keep it simple and and don't end up owing people stuff. Especially when it's a record label. I think the way we've always looked at it, the record label puts the record out; we do the touring.
DS: We were the kind of kids who moved out at 18 and paid our own rent. I was very eager to be like, "I want to get a job. Let's do it."

Are you in the black when you get home from a tour?
DS: Hopefully.
RR: That's the goal. Although you said "When we get off a tour," and when do we get off a tour? It's for a small window of time, maybe a month at most.

What's the worst part of touring? What's the best part?
DS: The worst part of is being away from friends and family and going to exotic places and not seeing any of it. I went to Zagreb, Croatia. I saw a venue, I saw 20 feet around the venue, a hotel and a river.
RR: Not seeing friends and family, you're just out of the loop. Big events happen when you're gone.
DS: But it's the coolest job/life/thing ever. It's great to communicate with people and play music and make art and experience different cultures and cities and towns and communities.
RR: Sometimes I have to take a step back to see it all, because you get into doing it every day, but the best thing is the fact that we get to go out there and communicate with people on a nightly basis. And if it all goes well you've made a connnection to people in a place you've never been before. It's a powerful, insane, amazing thing that we're able to have the opportunity to do that. When I was younger I hoped just to do that once, anywhere. And to be able to do that continually and to have that feedback between the audience and the band — if you stop to think of it, it's overwhelming. So at some point you just play the song. There's a bigger experience there that's hard to understand when you're in the middle of it. But maybe we're better off not thinking about it while we're doing it, and later on going, "Whoa, that was intense."