Accessibility links
Justin Bieber's Big Weekend: Keep Your Eyes On The Haircut : The Record Between the Grammys and his 3D concert movie, the next phase of the teen star's career starts now. 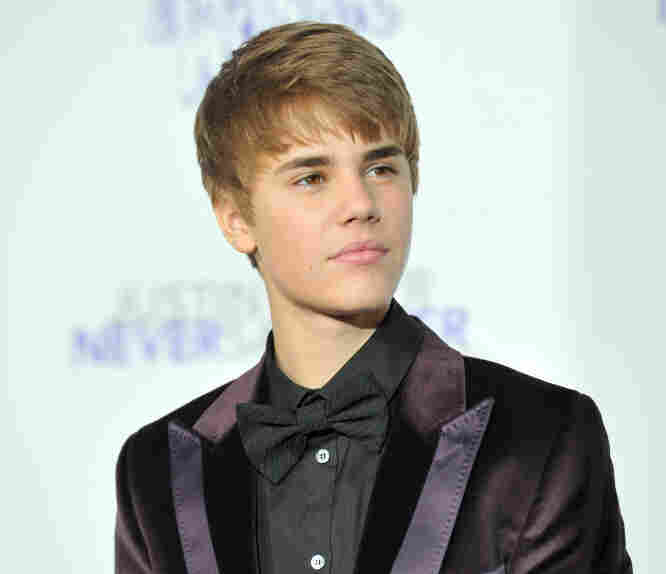 Justin Bieber, on the cusp of something. Alberto E. Rodriguez/Getty Images hide caption

At the top of the page you can listen to Weekend All Things Considered host Guy Raz's interview with 14-year-old "Belieber" Abbie Byford. Byford publishes an online news letter about all things Beiber.

This weekend belongs to Justin Bieber. And while the hordes of his longest-standing fans might think it belongs to them too, the events of the next couple of days — the opening of his 3-D biography/concert film Never Say Never and his nomination for Best New Artist at the Grammy Awards — should mark the moment when Bieber fever infects a new host body: grownups. As much as the inevitable wild success of the film will be vindication for all the toddlers moved to tears by their love for the mop-topped 16-year-old, this is the end of his beginning. The sound of millions of young girls screaming your name is a sound the pop world loves, but it can't last forever.

So pay attention. If you go to the movie this weekend or sit down in front of the Grammys on Sunday, keep your eyes on the haircut, and try to hold on to those memories. 10 years from now, what will have emerged from the now just-forming Bieber chrysalis? An acoustic crooner? A multi-platform industry mogul? A washed-up reality star?

Best case scenario: the YouTube era's Michael Jackson, a less remarkable talent, but more approachable and well-adjusted. Someone who sells as much of every kind of product as anybody can these days.

So far, the ascent has been smooth and lightning-quick. Bieber released his first album just 15 months ago. His second went to Number One just five months later, and he filled Madison Square Garden with 20,000 shrieking pubescent girls (give or take a few parents) another five months after that. But he's hardly a sure bet for long-term success. He's put out two EPs, My World and My World 2.0, plus a set of acoustic versions of the same songs, soon to be followed by a set of remixes. The problem is his most fervent supporters are people whose money the industry takes seriously but whose taste it views as fickle and inscrutable.

More evidence of entrenched industry skepticism: none of his singles have ever topped the charts, and a list of the top 75 radio songs of 2010 in Billboard included zero hits by Bieber. He could probably retire on his 17th birthday off the receipts from his recent arena tour. If he wants a career, he'll have to change the way everyone who's not a teenage girl thinks about him.

I'm not suggesting that this weekend will be the tipping point, but it should be the moment when the carefully lined up dominoes begin to fall.

Never Say Never is a machine, a monster of a film that should gross hundreds of millions and make Bieber and his team into an undeniable force in the industry. Co-produced by Bieber and his manager Scooter Braun, the movie is cannily made, and advances two essential arguments. First: Bieber's fame is a piece of fate, the inevitable end of his god-given talent. Half of the movie is the story of how Braun discovered Bieber on YouTube, and how he helped expose the youngster to people who could hone his talents (home videos show Justin playing drums, guitar and piano). The other half of the movie, which follows Bieber and that coterie of supporters as they rehearse and perform an arena tour that ends with a sold-out show at Madison Square Garden, pays tribute to the the star as a product of a handsomely designed, ruthlessly effective bit of music industry machinery.

The pairing of these two somewhat dissonant arguments (let's call it a shaky harmony?) makes the movie feel at once like a valedictory for the young fans whose love for Bieber burns with an almost unknowable intensity (as far as I can tell, the movie is in 3D just so young girls can see their own hearts leap out of their chests), as well as a plea to understand him as an artist with a future in the industry, one that will continue to grow given the right kind of investment. Pop isn't traditionally kind to the careers of young stars; the ones who make it past the gates of adult stardom — Justin Timberlake and Lil Wayne, to name just two examples — are the ones who capitalize on the artistic freedom that can accompany success.

That's the same argument Bieber's been making with his recent press tour (stops on The Daily Show, Saturday Night Live and Ellen, with an upcoming episode of Glee) and it's the one he'll have to keep making at the Grammys on Sunday night. In front of the industry, he'll have the chance to hint that he can handle more than cheerful, toothless love songs and rote, if well-executed, pop moves.

But his crazy success to this point means that he doesn't have to do much more than hint. The moment in pop history that will be dancing in the back of our minds as we watch Bieber start to make this transition will inevitably be Michael Jackson's 1983 performance of "Billie Jean" at the Motown 25 concert, where he debuted the moonwalk.

On that stage, Jackson proved that he could own everyone's attention by doing something no one else had ever thought of. Bieber won't match that this weekend. That moment comes around so infrequently that it can't be designed. Instead, here's what Bieber's camp has to be hoping for: that after this weekend, there will be fewer arguments against the idea that Justin Bieber is a huge star. It'll be a subtle shift, an effort to get a new audience to embrace their star without alienating his core supporters. But 10 years from now, the moment could matter more than we realize. I wouldn't bet against them.