Accessibility links
'The Nat King Cole Show': From The Small Screen To Your Computer Screen, Finally : The Record Why the NBC variety show hosted by the singer and pianist remains important 50 years after it went off the air. 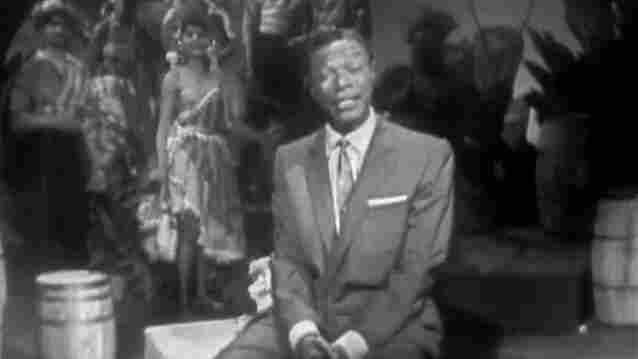 Being a little kid in the 1950s meant I could count on the fingers of one hand how often black folks appeared on television in a non-menial, non-comedic capacity. And when they did, everybody stopped what they were doing to watch.

Yep, we were colored back then and colored was in scarce supply on the networks. Aside from a few insulting stereotypes, black and white TV was mostly white when it came to programming.

Which is why Nat King Cole was so important to us. He was smooth, sophisticated, well-spoken and impeccably dressed. He exuded polish, refinement and wit. Not a mop, broom, uniform or deck of cards in sight. "He isn't pretty," my father used to muse, "but that cat is smooth as all get-out."

Billy Preston would go on to play keyboards for the Beatles and the Rolling Stones, but he was just 11 when he played this Fats Domino classic on The Nat King Cole Show in 1957.

Smooth enough that NBC thought he might go down easily with white audiences, and so The Nat King Cole Show went on air in November 1956 and for a year, America got to see a black man running the show. Literally. Today, iTunes will begin to release a set of remastered show episodes from the Cole family vault. Apple says 25 shows in groups of four will be offered over the next six months.

Cole's show was not only notable for the race of its host, but for the ease with which he interacted with hisguests. Most of them were from the era's A-list: Tony Bennett, Eartha Kitt, Peggy Lee, Sammy Davis, Jr. Cole sang spirituals with the great Mahalia Jackson and clowned around — elegantly — with pal Harry Belafonte on a novelty calypso hit.

The parents who'd tried to drag us away from Amos n' Andy's antics sat us down on Sunday night to watch Mr. Cole charm much of the country.

His show went off the air after 13 months, a casualty of skittish advertisers that worried they'd lose Southern consumers if their product was promoted on the show. That prompted Cole's wry assessment that "Madison Avenue is afraid of the dark."

Which makes it all the more wonderful that Cole is back — in our living rooms and now on our computers and smart phones. Can't wait to watch the original smooth operator in action again.