Accessibility links
Where To Buy Music To Get More Cents On The Dollar To The Musician : The Record If you want your favorite musician to get the most out of your money, there's only one choice. 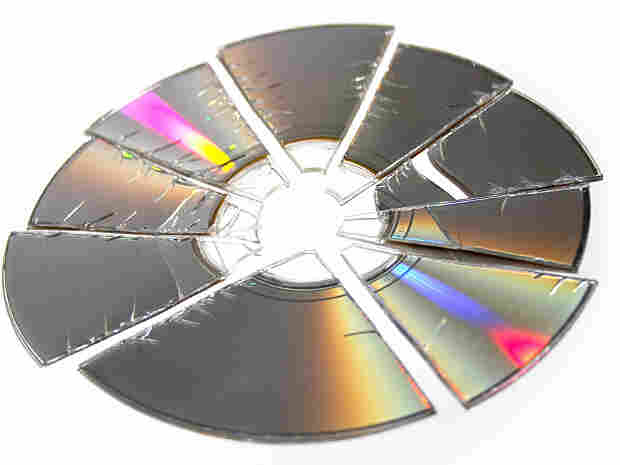 No single person gets all the cash you pay for music — parts of varying size are spread out around the industry, and those sizes change depending where you buy. Courtesy of istockphoto.com hide caption

Say your favorite band is putting out a new album and you've decided to buy it. You want to make sure that when you do, the band gets as much of your money as possible. Where do you shop? Best Buy? Your local record store? iTunes?

It used to be so simple. An album would come out, you'd pay a store some amount of money in exchange for it, and the band would get some of that money.

Well, actually, not quite that simple. Here's how it worked: a band would record an album for a record label, which would make many many duplicate copies of that album. At that point the album became like any other physical good. The label would pay a distributor to get these goods into stores; the stores that agreed to stock the album would pay a wholesale price for it. At that point, the store could sell it for as much as it wanted to, based on a variety of factors — how important the sale of recorded music was to its continued existence; whether the store wanted to use the lure of a cheap compact disc to get you in the doors so they could sell you expensive appliances. The record label would pay the musicians a portion of the wholesale price of each album sold, usually the same regardless of retail location (as a result, gold and platinum sales designations are based on number of copies shipped and not sold, but that's another story).

Of course, today, the Internet (as it does with just about everything) has made the business of being a fan who just wants to buy an album much more complicated.

"In general, you want to make sure your album is everywhere," says Dawn Barger, the manager of bands that include indie heavyweights The Antlers and The National. "You want it in the indie stores, you want it on iTunes, you want it on Amazon. And if you can get it in the chain stores, that's good because a lot of places, that's the only place to get a physical record these days."

It's important not to leave any outlet out, Barger says, because you don't want to frustrate a potential customer who prefers a specific kind of store. But that doesn't mean there's not a difference. Let's review your choices.

Often today, you don't have to pay anything to listen to a new album, and sometimes you can even do it without breaking the law. Between sites like YouTube, which host non-sanctioned user-uploaded streams; Rdio, where you pay a subscription fee to have access to a selection of cloud-based streaming albums; and sites like NPR Music (hi, guys!), where streams of many full albums are available for limited amounts of time, you can listen to an album without paying a dime.

So it doesn't count as a purchase, but that doesn't mean the musicians walk away from the exchange empty-handed. These websites pay for the right to broadcast that music (as do radio stations), often in tiny amounts per song/per listener, to organizations like SoundExchange, which in turn pay royalty rates to the musicians. According to a 2009 settlement between the National Association of Broadcasters and SoundExchange, that royalty rate for 2011 is $0.0017 per song.

More money (still in tiny increments that, in the best-case scenario, accrue over time) goes to the songwriter(s) whose work is streamed, via organizations like ASCAP and BMI, but the specific amount of money that songwriter receives is a percentage of the licensing fees paid by the streaming site in proportion to how often her song is performed, and how many people were listening.

"On the digital side, most people tend to make between 60 and 75 cents [per song] for a sale off of iTunes," Barger says. "That money doesn't all flow back to the band, but that's generally what the label earns from iTunes."

Why the range in wholesale price? Barger says that unlike physical distribution, contracts with digital stores are negotiated separately by each label. And from there, it's kind of impossible to know just how much money a band will get if you buy their album via an a la carte (as opposed to subscription) download service, because the each band's contract with its label is different, and renegotiated every year or two. The two parties might split the revenues 50/50, or the musicians might get a percentage of each sale.

So you've made the choice to leave your house, walk into a physical record store and use your dollars to vote for a band. How much money does your effort buy? Not necessarily much more than what that band might get from the sale of a digital album.

To get albums into record stores, most labels partner with distributors. Bob Morelli, the President of RED Music, an independent distributor owned by Sony Music, describes the relationship between a distributors and a store as similar to the one between a label and a musician. Each album has a set wholesale price – somewhere between five and seven dollars, according to Dawn Barger – that each and every store that wants to stock the album will pay (as with digital sales, the musicians get a portion of that wholesale price that depends on their contract with the label). The distributor's job is to figure out which stores the album will sell in, and then to convince as many of those stores as it can to stock it, to make it "as ubiquitous as possible," Morelli says.

In order to achieve that ubiquity, some records bring in a little less money.

"If you have a discounted album in a physical retail setting, generally, not always but generally, the record label has paid for that," Barger says. "Price and positioning, listening stations, weekly circulars — all of these things can be charged back to the record label to position the record better in the store."

Sometimes those discounts trade in higher sales for a lower per-album return to the band. When the National's last album, 2010's High Violet, came out, the band's label paid more for placement than it had with the band's previous album, 2008's Boxer. Nearly a year later, even though sales for High Violet are stronger, Barger says, "At this point in the album cycle, we've actually earned more per album from Boxer than we have from High Violet, due to the spend over time."

Directly From The Band

While the many layers of complex contracts, discounts and placement programs can make it tough to know exactly how much of your dollar a band gets from a retail outlet, there's one reassuring certainty. When you buy your album directly from the band, it actually sees significantly more money.

That's because in this scenario – say, when you buy it from a band at a show – the musicians function as the retail store. Which means they pay the wholesale cost for the album, and you pay the retail to them. "So they're purchasing from the label and the money that goes back to the label is paid back to them in their royalty share," Barger explains. "But all of the markup that would normally go to the retail store goes to the band when you purchase it at a show."

Even if you subtract a fee from the venue, that can mean an extra five or six dollars per sale. Which can add up.

Plus, there's a bonus. The San Francisco-based musician John Vanderslice calls sales via digital or brick and mortar outlets "essential" but "unknowable transaction[s] to me." Handing over a copy of an LP to a fan at a show, though, is his favorite "It's a totally exciting and very pure thrill that will never die with me. Like half of the fun of playing a live show for me is going to the merch table and talking to people and signing stuff. ... It feels really great to hand-deliver that to a fan."