Accessibility links
An Endorsement: The A.V. Club, 'Whatever Happened To Alternative Nation?' : The Record A big thumbs up for the recently wrapped series on rock in the 1990s from the Onion's culture site.

An Endorsement: The A.V. Club, 'Whatever Happened To Alternative Nation?'

An Endorsement: The A.V. Club, 'Whatever Happened To Alternative Nation?' 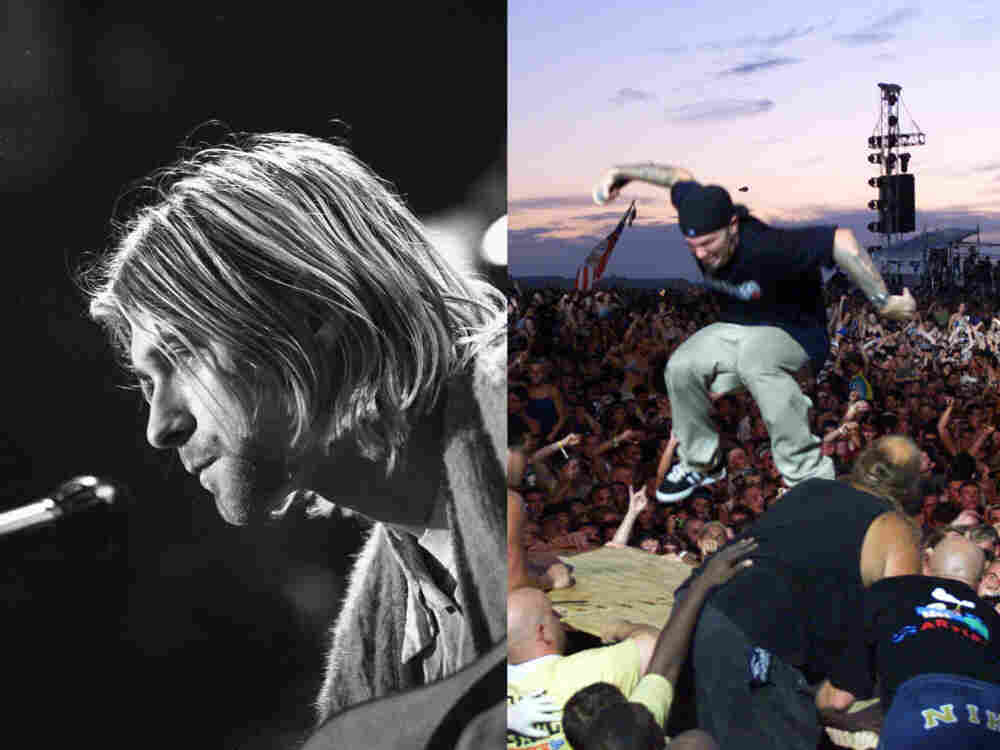 The decade's first star, and the monkey who showed it the door. Frank Micelotta (both photos)/Getty Images hide caption

This week we've been thinking about what the music of the 1990s meant to us back then, and what it means to us now. General consensus over at All Songs Considered, where the conversation started, is that the decade was a great era for music that has continued to pay dividends in the years that have followed.

If that conversation whetted your appetite for '90s music coverage, there's a great resource waiting at the A.V. Club, which wrapped up its series on the rock music of the 1990s, Whatever Happened To Alternative Nation, yesterday. The series — ten parts, one for each year of the decade — was written by Steve Hyden, who was an impressionable teen at the start of the decade and had entered a music writing career by its end.

Hyden's concerned with the way that alternative rock opened up borders in the decade's early years, and how the stylistic freedom that indie and punk and rap (to a degree) introduced into mainstream rock calcified into boundary-crossing but blunt rap-rock and nu-metal that rose up later. He tracks the shifting balance of power by identifying, in each of the pieces, a conflict that stands in for the state of rock and roll: Radiohead vs. Oasis in 1997, Live and Bush vs. the memory of grunge in 1995, and Kurt Cobain vs. Axl Rose in 1991.

It's convenient shorthand to paint Axl Rose as the meathead rock cliche and Kurt Cobain as the genuine artist, but what gets left out? Looking back, I see the crucial difference between Axl and Kurt being how they chose to act out their darkest, ugliest sides. Both men had troubled childhoods that led to adult lives distinguished by intense mood swings and a compulsive need to control their surroundings. Both men hated the press for spreading "lies" that often turned out to be true, and both were drawn to complicated women who created as much misery as ecstasy in their lives. Both men saw fame as a double-edged sword; it gave them the attention they craved after a lifetime of being ignored, and yet it also seemed to intensify their feelings of self-loathing. They were, to use medical terminology, a couple of f***ed-up individuals, which both men expressed eloquently in their music.

It's a narrow vein he's mining, but one that stays meaningful over 10 pieces and some 40,000 words because the primary filter is Hyden himself, whether through research or recollection. He can't help but be romantic about the decade that shaped his musical taste, but he's also not afraid to poke fun at his younger self. Here's his decade-removed take on how he approached the opportunity to write a review of a concert by nu-metal heroes Korn for his hometown paper, the Appleton Post Crescent:

Finally, a chance to climb into the belly of the beast and stick it with my all-powerful verbal swords. Sure, I went into the concert with the utmost journalistic ethics, prepared to act as an impartial chronicler of the evening's events. (Did I mention Puddle Of Mudd was opening?) But no matter how hard I tried to give Korn a fair shake — which, truth be told, probably wasn't that hard — my personal grudge against the band had turned into an unstoppable Anton Chigurh rampaging across the terrain with nothing but bloody murder on its mind.

By the time he gets to Part 10, which looks at the disaster that was Woodstock 99 (an event that's been written about, and well, many times before), the decade has become something of a tragedy of squandered opportunity. It's a tribute to Hyden's writing, good humor, and the music itself that with so much of the series, a decade that's been in the ground for 11 years — buried by tragedy, bad choices, and the rise of the Internet — comes roaring back to life.