Listen to A-Trak demonstrate how Serato's Scratch Live software uses a timecode embedded in a tone on a record to allow him to manipulate a digital version of a song (in this case, his song "Barbra Streisand") stored on his laptop. 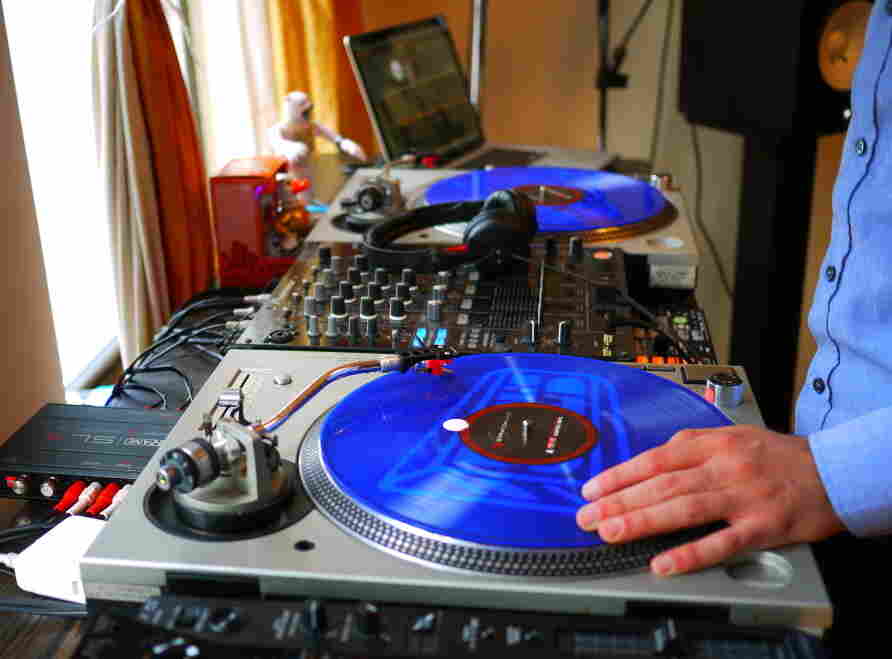 This week we talked to a bunch of people about how vinyl has managed to survive, despite the fact that, technologically speaking, the format is something of an antique. One key group that helped vinyl stay alive once the public began to abandon it in favor of the CD was DJs who would spin vinyl in clubs and on the radio. But in the last decade, while younger audiences — especially indie rock fans — have started buying new music on vinyl, those DJs have largely traded in their crates of records for digital files they play through vinyl emulation software like Scratch Live, made by the New Zealand-based company Serato.

The story of Serato (and other vinyl emulation programs, like Traktor) is the story of how the leading edge of innovation always has to contend with both the practical limits of technology and the emotional and physical pull of tradition. And there's almost no one in the world better equipped to tell that story than Alain Macklovitch, the Montreal-born, Brooklyn-based DJ, producer and record label owner better known as A-Trak. Macklovitch's career has overlapped the transition from vinyl to digital DJing at every turn. He began his musical career with as close a relationship to vinyl as you can get: from the age of 12 he was a turntablist, a DJ who spins, mixes and manipulates vinyl records to produce new sounds. At 15, he was the DMC DJ world champion.

Macklovitch's youth is important for reasons beyond the fact that it made him a prodigy as a DJ. Born in 1982, by the time he was 20 years old software companies were already starting to introduce programs that would (theoretically) allow DJs to manipulate mp3s the way they had always messed around with records. He was the first DJ outside of New Zealand to test Serato's software. He spent four years as Kanye West's touring DJ, and helped demonstrate that vinyl emulation software could offer hip-hop shows the flexibility of vinyl with the convenience and sturdiness of developing digital formats.

For the uninitiated (like yours truly), the whole idea of scratching an mp3 on a computer using what's essentially a joystick in the shape of an actual turntable is a little bit baffling. But A-Trak has decades of experience with this sort of thing, so once we were done asking him about what vinyl means to him, and why he doesn't use it in shows any more, we got him to take a step back and explain the basics of how Serato works.

"[Scratch Live allows] a DJ to continue to play on the physical format that they're used to. There are ways to mix within a computer, but there's an artistry to the craft of playing on vinyl records or even CD turntables that are made to emulate vinyl records. And so DJs want to stick to that equipment but play songs that are actually stored on the computer and that's what Serato allows you to do. You're still using a turntable, you're still using a needle."

Listen to A-Trak demonstrate how Serato's Scratch Live software uses a timecode embedded in a tone on a record to allow him to manipulate a digital version of a song (in this case, his song "Barbra Streisand") stored on his laptop.

The setup is essentially the same as it ever was. Two turntables, a mixer, and speakers. You just add a computer to the chain, and instead of playing directly off the record, the software allows you to assign a digital file to the "record" that's spinning on each turntable. Here's how it works:

"The record that you put on the turntable has a tone rather than having music. But that tone has a time code that a computer can read. The turntable first sends the tone to the computer. On the computer you choose what song you want to assign to each turntable. On the computer you say, 'My left turntable' — which is just a virtual turntable — 'will be playing this Kanye West record.' The computer receives the tone from the record, which says, 'Right now the needle is at 1:32 into the record moving forward.' So the computer produces that music and sends it back to the mixer and then once it hits the mixer it becomes the same as the traditional setup. It goes back to the signal path where the mixer receives music from the turntables and mixes them a certain way.

"Everything that you do on a record is reflected the same way as if it were a real record. If you increase or decrease the pitch on the turntable, which is what you do when you mix records, that information gets transferred as well. The timecode that gets sent to the computer says, 'I'm playing at pitch plus two percent.' And the [computer] gets that information and produces the music accordingly. If you scratch a record, which just means that you're moving a record back and forth, well, you're moving the time code back and forth and that time code gets sent to the computer. And the timecode says, 'On this specific part of the song, the record is going 'Forward, backwards, forward, backwards.' And it goes: 'Chr-prt, chr-prt' and it sounds like a real scratch."

How it changed everything:

"The tiniest reflexes that go through your mind when you're playing a set and thinking of your next songs — these little mini thought process that you're not even conscious of — are completely different when you're looking through a list of titles on a computer compared to physically flicking through records with album covers that tell you what the song is before you even have to read the full name. So there was a process of getting used to DJing and also a process of building up a library of music.

"Part of what made the switch to digital quicker and easier was I did a couple of big file trades with a couple of DJs. You would meet up with another DJ and you had a hard drive with a certain amount of gigs of mp3, and just swap. Then suddenly you're like, 'Whoa, this guy just gave me a folder of like 200 a capellas.' That's a great arsenal. And quickly one thing that became very apparent to me was that right as I started doing a couple of these trades that in a matter of moments would quadruple the size of my song library, I also started accumulating music in a lot of different genres. So if I'm doing a trade with a DJ who knows dancehall really well, and [I say], 'You know what, I don't have a dancehall collection, can you give me your folder of like the essential songs if you're going to do a dancehall set?' And suddenly I had a dancehall set. I had an '80s set. I had a classic soul set. So quickly it became apparent to me that DJing on Serato would allow DJs to jump between different genres a lot more easily."

Still, it took a long time to convince everyone else.

"I was Kanye [West]'s tour DJ for four years, and the entire music of the show rested on my shoulders. It took a while for me to convince his team to let me use Serato because again, everyone was like, 'What if the laptop crashes?' In the earlier days of hip hop, of course, the DJ would play the instrumental track off of vinyl and the rapper would rap on top of it. But sometimes vinyl would skip and it was just kind of part of going to see a rap show. When I was growing up in the '90s I would go to a rap show and there would be a part where the needle skipped. Part of being a live performing rapper was knowing how to still keep rapping when your DJ's needle skips. It's funny when you think about it today. And then at some point in the mid-'90s the first change was DAT machines. A DAT tape deck isn't that big. So there was a point in the mid-'90s where every rap show had a DAT tape deck playing the instrumentals. But they're a pain in the ass to use. You have to rewind and fast forward the tape. It was very slow.

"Here's the weird part, though. Rap shows started using this machine called the Instant Replay, which isn't meant to be used for live music performances at all. The Instant Replay was a machine that was made for radio station IDs. It's a machine that has 50 buttons, and you can record any audio you want and assign it to these various buttons. You hit number twelve and it plays [in radio DJ voice], 'Hey, you're listening to KBBL.'

"I think Cypress Hill was the first band to think of this: rappers went to radio stations and were like, 'What's this machine you're using to trigger all your audio?' And they started using it for live shows. It's also an extremely rugged machine and it was really loud. Rappers like loud sounds. So for all these reasons combined, for years and year every rapper was using this instant replay machine. This big machine with 50 buttons that could trigger all their instrumental tracks. And when I started working with Kanye, his show was on an instant replay machine.

"I hated that machine. Because as a DJ, it gave me no flexibility at all. You couldn't even pause on it and you couldn't start from, you know, the second verse or whatever. All it could do was play something from the beginning, so if we were rehearsing and they'd be like, 'Let's start over from the second chorus,' I'd be like, 'Stupid machine.' But it was extremely reliable. So for that reason everybody felt confident about having that as the backbone of the music on the show. So for the first year I was touring with Kanye, my setup was an Instant Replay on the right with all my instrumental tracks, and then I had one or two turntables and a mixer with Serato which I would just use for scratching and little transitions and effects and things that I would do on top. And I had to negotiate for a long time, like: 'Guys trust me, we can do the whole show on Serato.'

"And eventually, after about a year, we did, and actually it did mess up a few times. But it gave us so much flexibility that everybody was still okay with continuing to use it and as time went along the software itself became more and more reliable and now everybody runs their show off Serato."