Accessibility links
Singled Out: Lykke Li's 'I Know Places' : The Record The Swedish singer talks about the quietest song on her bold new album, Wounded Rhymes. 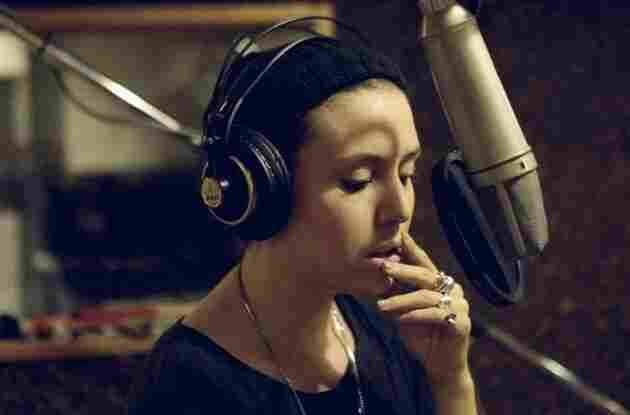 Swedish singer Lykke Li appeared on our radar with her 2008 debut album Youth Novels. Her collection of electro pop songs sifted through the timidity and vulnerability that comes when youth and love collide. Though a strong pop album at heart, the percussion and production are as understated as Lykke Li's coy lyrical advances.

Out today, her sophomore album, Wounded Rhymes, finds Lykke Li fleshing out arrangements with bolder beats and more confident vocals. As she did for Youth Novels, Lykke Li recorded the new album with fellow Swede Bjorn Yttling of Peter Bjorn and John, and though an emotional sensitivity still runs through the album, the songs have more bite this time around, which she attributes to a newfound confidence in the studio and more psychotic arrangements that burst with sound. But when we talked with her about her favorite song off Wounded Rhymes, Lykke Li chose the record's most subdued track: "I Know Places."

Why did you choose "I Know Places" as your favorite song from Wounded Rhymes?
It's just a very simple song, but it's like, you know, should I change it? Or should I do something wild? Sometimes it's just right to keep it almost like a folk song or a blues song. Just go round and round — like why change when you're in a good space?

It stands out from much of the rest of the album because it is so subtle and subdued. Do your songs generally start up that way and then build up in production?
All the songs we write on either piano or guitar originally. I wrote "I Know Places" because I had just bought an autoharp when I was in New York; it was the first song I wrote on that autoharp. I was so tired. I was in New York, and it was just so much noise. I just felt so out of place everywhere, so I wrote that song.

A lot of the songs on the album are more produced with heavy drums and synths. On "I Know Places," it's just keeping the song in that one space. Did you and producer Bjorn Yttling intend to keep that track more stripped down?
I played that song for him on the autoharp, and our plan was always to keep that. We saved that song for last — we didn't even try to record it earlier, because we knew it was just going to be one take. Just me, Bjorn and a room mic. I did my own harmonies on it, and that was basically it. There's a lot of room — just an amplifier and some reverb. We didn't do anything with that song, because it didn't need anything to be done.

That little bit of silence follows the end of the song, and then there's the instrumental bit afterwards, at the very end. What was the decision to put that there instead of just letting the song end?
I think a lot of times, songs, they just speak for themselves. The song decides. So I just always try to follow what the song needs. It's a very instinctual process.

When you were out writing in L.A., you spent some time in the desert. Is there an imprint of that on this track, or does that show up more on some of the others?
I'm not sure that it did show up in the music; I think it morphed me as a person. It healed me a bit. I really needed that deserted, open space to not think about anything at all. I think it was important to take a complete break from everything and not write music for a while, and to just be, and to just hear my thoughts clearly. The thing you can probably hear on the record is that my opinion came forward. I draw conclusions. I think it's probably more lyrical than musical.

Lyrically, did you have an idea when you went into the album of what you wanted it to be as a whole, or does it just come from the individual songs and experiences that you wrote about?
It definitely started as a whole, like a body of work. Just like a human body, you need feet, a head, a heart and the soul. So it definitely started as one world. As soon as you find the right colors, you just start to paint, and I really enjoy keeping it in that one world. There has to be a balance. For example, there are a few songs that didn't even make it on the record that I really would want to have because I love them. But I couldn't fit them on, because I just wanted it to be a very compact record.

Where do you think "I Know Places" fits within the whole of the record and the idea of it?
It's that tender moment. It's a pause. Like someone gives you a kiss goodbye, and you watch them walk away. And there's a little scarf. You see the scarf, you know, and they don't turn around. I guess it's kind of bittersweet.