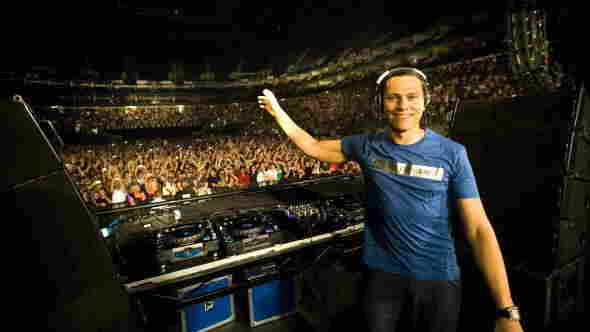 This many people times 300: Tiësto performs at the 23,000 capacity O2 Arena in London in 2008. He's got more than 7 million fans on Facebook. Naki/Getty Images hide caption

Once upon a time, being a "diehard fan" meant buying a band's album, show ticket, T-shirt, limited edition signed LP — anything your earnings would allow. Today the term can have a very different meaning. You can be a "diehard" by blogging about everything the band puts out, posting links to your Facebook wall, re-Tweeting the band's messages, and commenting on its Soundcloud page, all without paying a dime.

Engaging with music in this way doesn't mean you're hurting your favorite band, either. Recent studies suggest quite the opposite: they show that fans who actively engage in social media bring more cash to the artists they love. Liking something on Facebook or re-Tweeting a favorite song can generate real world dollars.

Branded partnerships can offer things that record labels cannot offer, both financially and in terms of promotion.

"We used to create mixtapes and give to our best friends and now we have a means of doing that which sort of can spread word of mouth much faster and maybe reach a broader audience," says Jui Ramaprasad, a professor at McGill University in Montreal specializing in Information Systems and their effects on the music industry. In 2009, she and Professor Sanjeev Dewan conducted a study that examined the relationship between levels of social media activity (or blog buzz) and album sales.

"For several weeks I got album sales from Nielsen SoundScan for a set of albums, and then for a set of weeks I collected data using Google blog search on the number of blogs that had mentioned that album," Ramaprasad says. She and Dewan then ran these data through a regression, called the Granger causality model, and found a link: "Blog buzz did predict album sales."

But that doesn't mean that blog buzz caused album sales — that correlation is much harder to prove. Nevertheless, artists like Will Eastman stay on top of the buzz constantly, and see instant results. Eastman is a DJ, record producer, and nightclub owner in DC. He recently previewed his forthcoming release on Plant Records via his Twitter feed.

For everyone who follows, or "likes," Eastman on Twitter and Facebook, the song that he posts will show up on their screen. Then those followers can resend that song to their own followers, and the viral spread begins.

And Eastman says he's seen an interesting trend accompanying this promotional chain: "My label tells me that blogged songs — that is, an original song that's given away to blogs for free download — actually sell more in this day and age than something that is withheld."

How far that song travels depends not only on how many followers an artist has, but how active that fan base is. That's something that Eastman has noticed in his role as the owner of U Street Music Hall, a venue in Washington, D.C. When he is considering booking an act for his venue, he pays attention to levels of chatter.

"You can't just look at how many followers somebody has on Twitter and gauge their appeal. Somebody may have 12,000 followers on Twitter, that doesn't mean that 1,200, or even 120 people are going to come to their gig in D.C.," he says. "It's more important that people are re-Tweeting and talking about somebody."

Venue owners and record labels aren't the only ones paying attention to online fan bases. When a musician has, say, a Facebook fan page "liked" by millions of people corporations start to pay attention, and there's plenty of money to go around, says Toby Benson. He handles digital marketing for Tiësto, a DJ who just passed seven million "likes" on Facebook.

Essentially fans are supporting companies that are not typically associated with music, but are now crucial to the livelihoods of musicians. Though Facebook allows Tiësto a platform to connect with his fans, he doesn't see money from the ads on his page, Benson says.

But there are ways for a fan page to put cash in an artist's pocket, mainly through branded partnerships. "[Branded partnerships] can offer things that record labels cannot offer, both financially and in terms of promotion," says Benson.

"For example, we just announced a flyaway to Tiësto's headlining performance at Ultra Music Festival. That was in partnership with Heineken, who's a long term partner, and they're providing the flights, hotels, and some spending money and some tickets," he says. "We send the message to our fans to say, 'Hey, you can win this, all you have to do is click here.' That then takes you to Heineken's Facebook page where they are encouraging fans to like their page." 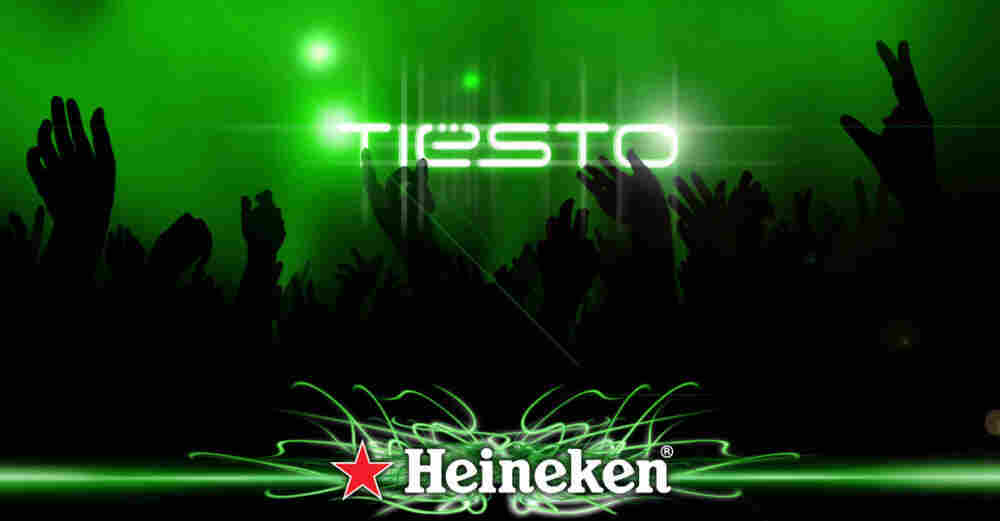 Tiësto has had a formal relationship with Heineken since 2009. The beer company sponsors tours by the DJ, who in turn directs his fans to Heineken via Facebook links. Courtesy of Heineken hide caption

Heineken, who announced their sponsorship of Tiësto in 2009, pays to produce the show, adding to Tiësto's bottom line. More online fans means a musician has greater power in dealing with sponsors.

This impersonal, often passive method of showing support for an artist, matters, Benson says, not only because they can use your support to barter with businesses, but because there is a direct line between you and the musician.

"For artists to be able to communicate with their fans on a one-to-one basis, instantly through these platforms, is an incredible treat for them," he says.

But as the industry's business model moves closer toward one where live events bring in the most money, Will Eastman says that weak ties aren't enough. Being there in person is what really matters. "In all honesty," Eastman says, "an ideal fan is someone who supports your music and shows up to your gig."