Accessibility links
Pop Stars, Private Shows And Political Consequences : The Record Pop stars like Beyonce have made (and donated) millions on private concerts for the Gadhafi family. 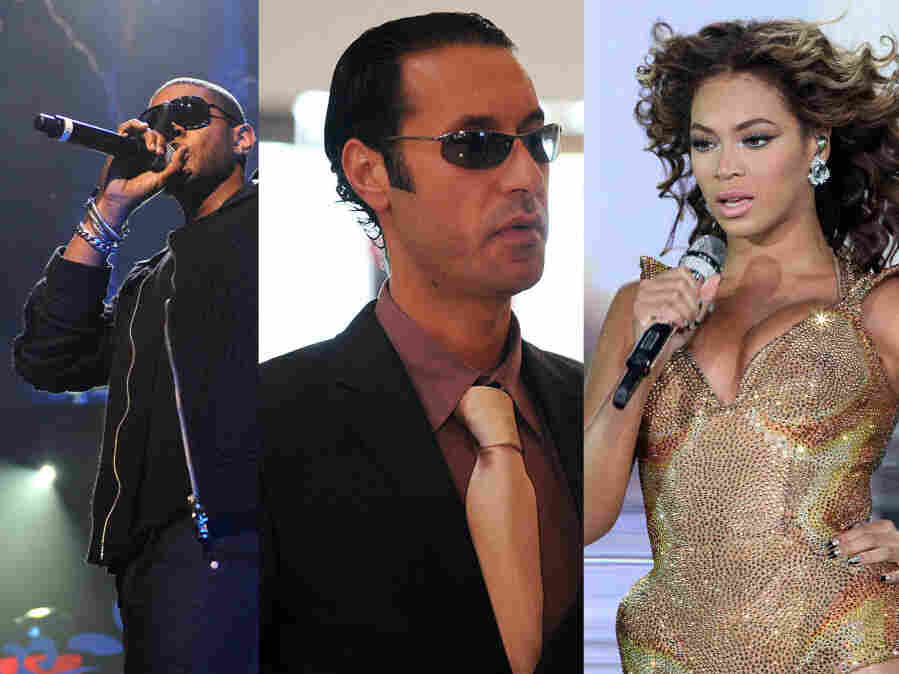 The stage is tiny. That's the first thing you notice. In the video, you can see the singer dancing in a black leotard, strutting back and forth while she performs chart-topping songs. The audio is loud and distorted, taped through a camera phone or hand-held video recorder. This could be a particularly tight wedding band, or a shockingly good performance at a karaoke bar, but it's not. The singer is actually Beyonce. The venue is an exclusive supper club in St. Barts, and the crowd is tiny, and just feet away from the singer. The man footing the bill for the whole affair? Hannibal Gadhafi, the son of the Libyan president.

In the past few weeks this scene and others like it have brought pop and politics into an uncomfortably close relationship. After Libyan President Moammar Gadhafi and his government responded to an uprising with violence and an insistence that they would "fight until the last man, the last woman, the last bullet," word started to emerge that Gadhafi's sons had booked exclusive performances with pop stars for millions.

On February 28, Nelly Furtado revealed via her Twitter feed that she had been paid $1 million by the Gadhafi family to perform for 45 minutes at a hotel in Italy and insisted that she would donate the money, though she did not say where. Two days later, Beyonce confirmed that all the money she had received for that private performance — at a party on New Year's Eve 2009 — had been donated to earthquake relief efforts in Haiti in early 2010. Later, Usher and Mariah Carey both admitted that they had been paid to perform under similar circumstances and said that they would donate the money they received.

Though it's a nice — and unexpected — result for the charities that will benefit, the situation is awfully embarrassing for the artists. So we wondered, given that these are all musicians who have booked large and profitable tours, why would they do it? And — from the other side of the coin — if you've got the funds available, how do you go about booking Beyonce for a show like this in the first place?

1) The huge amount of money.
The going rate for private gigs — from Elton John at Rush Limbaugh's wedding to Beyonce at the Gadhafi New Year's party — is $1 million/hr. "It's inherent in these situations that the act doesn't want to do it," industry analyst Bob Lefsetz says. "So the person who has the gig always overpays. The question is, how much do I have to pay you so you will overlook your inhibitions and say yes."

2) They pick you up at your house.
"Usually they send a private plane; you perform for an hour; you get paid a million dollars; you can be back in your bed that evening," Lefsetz says.

3) It's a storied part of the business.
The agencies who represent these stars usually have an entire department devoted to booking gigs like these. It's part of the business model. You don't do that business, your agency won't make money. This is the commodity that department is selling: access. They provide access to the stars that only the ridiculously wealthy can afford.

Ray Waddell, who covers live entertainment for Billboard magazine, says of the stars who perform at gigs like these: "They come to count on it. It can be 10 to 20% of their touring revenue."

In 2005, reports leaked out about artists like 50 Cent and Aerosmith earning millions to play at a bar mitzvah. As we've explored on this blog before, pop artists are increasingly reliant on big, highly produced shows to make money. Those shows are very expensive. They need gigs like this to supplement the fireworks their fans expect.

4) There's no advertising.
Because exclusivity is a major attraction for those who can afford to attend, nobody but the invited parties know about shows like the Gadhafi New Year's party. Which means artists can pocket their big paycheck, come right back to New York in two weeks, do a big show (with actual tickets), fans won't ever be the wiser and the market can bear it.

5) There's no ethical litmus test.
All types of potential patrons inquire about private parties, so musicians are essentially forced to set their own standards. Some bands won't do shows for beer companies or tobacco. Thomas Cookman, who manages artists like Manu Chao and Ozomatli, tells a story about Ramon Ayala, a very famous Mexican accordion player. He was playing at a show for Mexican drug lords; the show got raided and Ayala spent a few weeks in jail. "It would be like if Willie Nelson got caught at Al Capone's party," Cookman says.

Another manager, Danny Goldberg of Gold Village Entertainment (he manages artists like Steve Earle and The Cranberries), says that just because a show looks controversial in hindsight doesn't mean artists should apologize and give the money away.

"At the time that people did shows for Gadhafi, he was friends with the American government," Goldberg says. "I'm not sure if any of my clients would have been interested, but I don't think I would have had the clairvoyance a year ago that he would be dropping bombs on his own people today."

Did Beyonce and Mariah Carey and everyone else know Gadhafi son was footing the bill? It's hard to imagine that they didn't. The venue is small, and the Gadhafis have a notorious history of throwing ridiculous parties like the one Beyonce headlined. Either way, when the next offer comes — and there definitely will be a next, and a next, maybe they will ask some more questions — and instead of vetting the money, start vetting the buyer.