Accessibility links
Singled Out: Wye Oak's 'The Alter' : The Record The Baltimore duo reveals how a Discovery Channel documentary influenced a song on their new album.

Singled Out: Wye Oak's 'The Alter'

Singled Out: Wye Oak's 'The Alter' 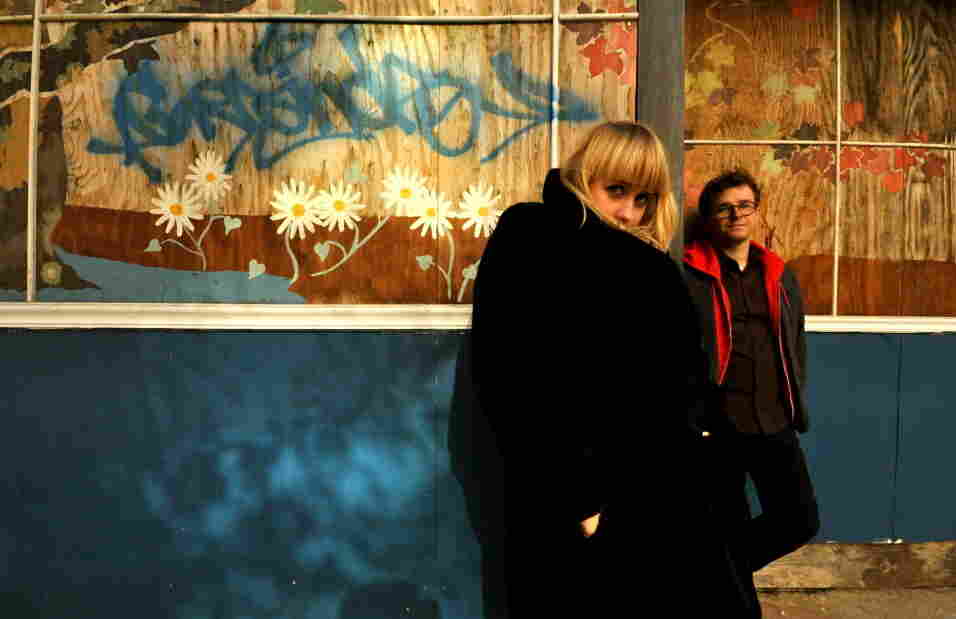 Wye Oak — the Baltimore-based multi-instrumentalist duo of Andy Stack and Jenn Wasner — began playing music together five years ago. The band self-recorded and self-released its first album, If Children, in 2007. With Wasner's rough-hewn but direct voice at its center, the album was good enough to get the pair signed by Merge Records.

Through two subsequent releases (the 2009 album The Knot and last year's My Neighbor/My Creator EP), Wye Oak's sonic world has expanded, though the priorities seem the same. The pair still build pretty but slippery songs — about characters who often seem anxious or frayed — and then let them swell to monstrous proportions or thin to a wisp before reigning them back in.

Wye Oak's stature has grown too: last month, it opened for the Decemberists on a short tour, and today Merge releases Stack and Wasner's third full-length album, Civilian. We asked the pair to talk about favorite song from the album, and they picked "The Alter." Note the spelling, Wasner says. "For once, with us, it's not a religious reference."

Why did you choose "The Alter" as your favorite song from Civilian?
Jenn Wasner: "I'm really fond of the song because I think sonically it's definitely more of a departure for us than anything else on the record. It's a very simple, pretty song."

Tell me what you were thinking about when you wrote it.
JW: "I remember I was with my parents and I was watching the Discovery Channel, some sort of documentary type special about multiple personality disorder. I think it was called The Woman With 15 Personalities or something like that. And they were documenting the life of this woman who existed split between these 15 different versions of herself. I guess the technical term that psychiatrists use for each of those personalities is an 'alter.'

How does that come out in the song?
JW: "The song itself is split into four verses, and they're supposed to be kind of back and forth at each other. The first one is the positive, empowered, comfortable, down to earth side, and the second one is the crazy, panicked, a little more spastic side. And it goes back and forth.

"I wanted there to be a reflection of that in the arrangement of it musically speaking. So I wanted it to feel kind of hazy and confused and at the end, at the very last part of the song, there's a pile of like 30 voices, this horrible sounding tone cluster that I'm kind of singing and screaming simultaneously."

Andy Stack: "Between the last record and this record we started to really embrace this love of straight up pop music. So there's this pop sensibility to the song that I personally feel like is more so than any other recording we've made. And I really love it because there's this uneasy tension between this buoyant pop riff and these subtly dark lyrics and vocals. It kind of has this instability between the two that defines the song for me."

JW: "It is supposed to be mildly schizophrenic. I don't like to be an open book because my songs are somewhat personal. It's somewhat of a defense mechanism and I also think that defying expectations in that way can be interesting because I like the songs to be able to reveal themselves in layers. So for a song that sounds happy – if you pay more attention to the lyrical content and suddenly realize how dark it actually is, that can be the kind of surprise that makes people want to connect with it even more."

AS: "Or at least makes it feel like it's not so one-sided. Which I think is one of the things that we strive for the most, to have this multi-layered music, both lyrically and musically and in the recordings."

JW: "We both strive for our songs to be growers, in the way that maybe they don't reveal themselves necessarily in one listen, but hopefully the more that people spend time with them, the more they uncover. One of the things that I enjoy most about recording is just being able to try and make the songs and the mood and the sound kind of fit the ideas and the words and exactly what I'm trying to say and trying to do."

So what did you do to "The Alter" to make it sound lighter and happier than it actually was?
AS: "It feels to me like a doo-wop, fifties, Elvis trick or something. And I think we both get really scared of the word "groove," but the whole song is based on repetition. And that's what pop music is."

JW: "The song was naturally poppy. The effort came in trying to add the layers and add the tension and the dark periphery and the outer edges. So I think something that's dissonant, like the last second or two of the song when all those voices are coming from all those different angles and it sounds harsh and clustered and strange, something like that stands out way more in a really poppy sounding song than it would in a song that's dissonant the whole way through. So I think that those little tricks can be more surprising when placed in the context of a song that sounds really light and airy."

There are just two of you — do you record by yourselves?
JW: "We recorded the record with our friends Mickey and Chris Freeland back in Baltimore, who are really talented musicians and producers and great people. Andy and I played everything on this record between the two of us. Generally we operate from the ground up – I play guitar and he plays drums – and we do all the basic tracks that way and then everything else is piled on top. So you may have an idea of how you want something to work, but until you actually record it and play it back, you don't actually know how it's going to turn out.

"We're both multi-instrumentalists so there's somewhat of a battle between who gets to play what when, but even if someone's playing the instrument, the other person is pretty heavily involved in composing whatever part is being written. Sometimes we actually have a hard time remembering who was actually playing any instrument at a given time. So there's a lot of trial and error in real time as we're working on things."

Some of your songs are really simple and direct and sound like they were played by just two people, and others that come at you from all angles. Did you know which one this was when you took it into the studio?
JW: "I was very surprised by the way the song turned out. I did not at all anticipate it being the kind of beat- and groove-oriented track that it became. Of all the tracks it was the most surprising to me, and maybe that's why I like it as much as I do. To have something like that materialize from the work that you've done, but almost without you intending to go in that direction, seems almost magical in a way. A lot of it too was working with John Congleton, who mixed the record down in Dallas. John really took the song and had a sense of what we were going for right away.

"And I still listen back to it and am myself confused at how everything came together in the way that it did. Because it was originally meant to be a somewhat simple song and it turned into something entirely different."