Accessibility links
The Legacy Of The CD: Innovation That Ate Itself : The Record Once the cornerstone of the record industry, CD sales have declined by more than 50 percent in the last decade. 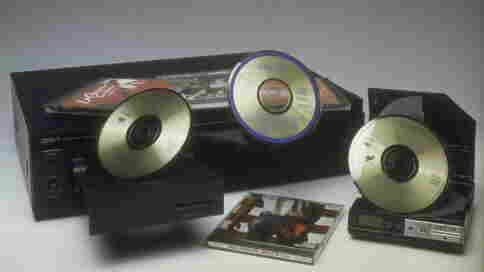 Before The Fall: CD players manufactured by Sony and by Nakamichi in 1985. Ted Thai/Time & Life Pictures/Getty Image hide caption

2010 was another lousy year for the music industry – and in particular, the CD. Sales of compact discs dropped last year by nearly 20% percent, according to Billboard. For a while, those shiny plastic discs lifted the fortunes of the recording industry to new heights. But the CD also contained the seeds of the industry's collapse — a collapse that's rattling more than Manhattan boardroom windows.

A Sony factory in Pittman, New Jersey, will see its last CD roll out off the assembly line at the end of this month. At its height, the plant employed 1300 people.

"The overtime, you had it whenever you wanted it," says Jim Jones, who's been driving a forklift at the factory since 1982, when the plant still made LPs. "10 hour days if you wanted it. Saturdays, Sundays — you could get it. That's how busy we were. A lot of times it was mandatory. You had to work, that was it."

Jones met his wife, Cindy, at the plant in the 1990s, when they worked in the warehouse together, rushing out the latest hits. "It's been so long since there was a big hit," she says. "It's just," she pauses, "slow."

Sony will still make CDs at its factory in Indiana. But the closure of the New Jersey plant is telling. Sales of compact discs have fallen 50 percent over the past decade. It's a long way from the early 1980s, when breathless ads and over-the-top hyperbole touted "sound like you've never heard it before."

The CD was invented by hardware manufacturers Sony and Philips. At first, executives at the major record labels didn't like the new format. But they started to come around — thanks in large part to Jac Holzman, the founder of Elektra Records who will be inducted into the Rock and Roll Hall of Fame next week. Holzman was a big advocate for the CD when he was at Warner Music Group.

"The CD was sexy. And it would bring higher prices — from about 8 dollars for cassettes or LPs at the end of the '70s, to about $15 in the early '80s," Holzman says. "You could resell your best catalogue again. CDs were lighter and cheaper to ship, which is a big consideration."

All of that meant giant profits for the music industry in the 1980s and '90s. "The CD sold so well. And it created this gigantic boom in the industry," says Steve Knopper, the author of Appetite for Self-Destruction: The Spectacular Crash of the Record Industry in the Digital Age. "And everybody got rich. And people just got incredibly accustomed to this. To the point where in the late '90s, the only way that you could get the one song that you liked was to buy the 15 to 18 dollar CD at the Tower Records."

At first, Knopper says, people didn't mind paying a lot for the new format. "You didn't hear the outcry at the time of, 'Hey, we're getting price-gouged.' Instead the public was going, 'this is much better sound.'"

The record labels promised that the price of CDs would come down eventually. And the discs did get cheaper — to make. But the labels kept retail prices - and profits - high. Jac Holzman says that was a mistake.

"It's fine to keep that up for two or three years. But the labels kept it up far too long. And I think it was a fraud on the public, and on the artists."

Sales peaked in 2000. Back when the disc was designed, no one in the music industry thought much about ripping or burning on a personal computer. But CDs were the first widely available format that allowed consumers to free digital copies of songs from a physical object. Which led to the rise of the mp3, and Napster, and other peer-to-peer networks.

On a recent afternoon, while shopping for used discs at the Princeton Record Exchange in New Jersey, Larry Haas offered that the music industry "shot itself in the foot" by not rolling back CD prices. Scott Gordon was there too and says that he still prefers CDs to digital downloads. "There's a certain thing about holding it in your hand," Gordon adds. "As long as this store is here, and I'm breathing, I'll be here probably 4 times a year."

That's hardly enough to bring back the glory days, but the CD hasn't faded out yet – in fact, Jon Lambert, the Record Exchange's general manager, says CDs are his store's bread and butter. He says sales of new CDs have declined dramatically. But the store makes up for it with a brisk business in used discs – especially in the five-dollars-and-under section. "Probably the biggest fallout from the downloading mentality is it became more a singles market. People were willing to pay a couple dollars for the songs off an album. But they're not willing to pay 18 for a new CD," Lambert says.

He wouldn't be surprised if new releases on CD slow to a trickle in the next 10 years, as record labels turn their attention to so-called 'cloud-based' music services.