Accessibility links
Live In Your Living Room: You Book The Bands : The Record A little bit of effort can help concerts flourish far away from the traditional live music industry.

Live In Your Living Room: You Book The Bands

Live In Your Living Room: You Book The Bands 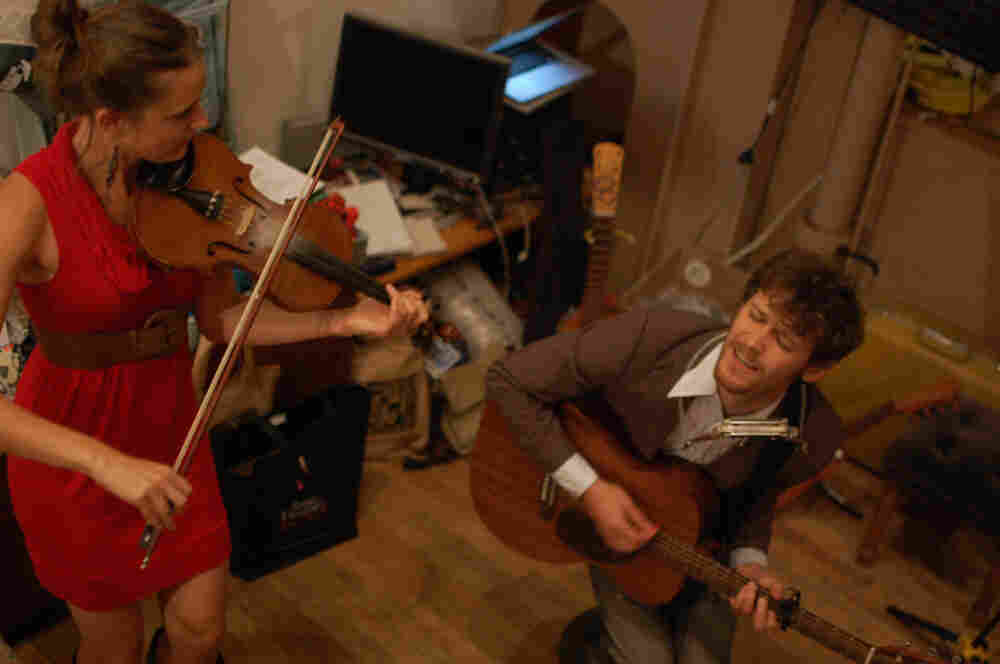 Concerts, while not exempt from the music industry's decade-long nosedive, are still among the most reliable ways for a musician to make money, increase visibility and connect with fans. As much as the Internet has changed the way we experience recorded music, there's still no digital equivalent for seeing your favorite band on stage, in the flesh.

The average fan's role in that process is simple: buy a ticket and leave the rest to the professionals. Live music is an industry unto itself, with a well-established machinery of venue owners, promoters, booking agents and ticket vendors. If you're not one of those people — or wealthy enough to rent out talent at million dollar prices — it can seem as if there isn't much you can do to participate.

However, there are ways to work outside the system — if you're willing to put in some extra effort. That could mean writing to local clubs and urging them to book the bands you love. You could use a web service like Eventful, which allows users to "demand" that specific acts play in their area (registered artists can use those tallies to discern where they have the best chance of drawing a crowd). Or, with a little trust in the kindness of strangers, you can take matters into your own hands.

That's what Craig Powell did a few years ago, when he moved into his one-story house on a quiet street in Durham, N.C. At the time, Powell was working a desk job for a music distribution company. His position had put him in contact with the management of two of his favorite bands — the lo-fi punk acts Cause Co-Motion! and The Fake Accents. Gathering his confidence, Powell decided he would throw himself the best housewarming party ever.

"I just really had no fear in terms of reaching out to people," Powell reflects. He contacted the bands and found they were both open to the idea of playing a small show at the house. Powell set a date and invited some friends; when the day arrived, he cleared a space for the groups to set up and perform. The show, he says, was a rousing success: "The momentum was there. It was a really great time, right from the get-go."

Dedicated house venues aren't uncommon, especially in underground scenes that champion independent, do-it-yourself ethics. Powell had been to a few of these, and found that they tended to be cooperatively run and have a large room equipped to handle crowds: "A rec room or a basement, or some giant room that was maybe never clean to begin with." He says his own situation was different: "I was taking all the furniture out of my dining room and rolling the dice, hoping nobody too crazy would show up and ruin my house."

Thankfully, nobody did, and pulling off the first show emboldened Powell to reach out to acts with whom he had no connection at all. The Internet has made that part easy — many musicians publish booking contact information on their websites — and Powell reasoned that while not everyone would say yes, it couldn't hurt to ask. 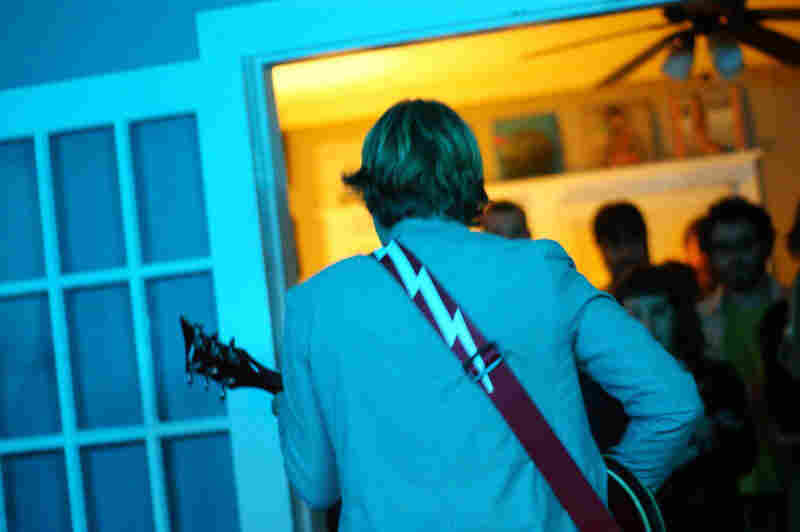 Both Cause Co-Motion! and The Fake Accents are now disbanded, but the house, which Powell has dubbed "The Layabout," is still going strong. Powell has hosted about 40 concerts in three and a half years, with enthusiastic crowds and minimal interference from neighbors or police. He says friendliness is key to The Layabout's appeal.

"I think people are pretty quickly converted — they don't stay intimidated once they walk in the front door," Powell says. "It's a pretty friendly atmosphere, and I'm a pretty welcoming guy. I always try to make it clear that these shows are 100 percent open to the public."

Houses will never replace traditional venues, but many artists have come to consider them an indispensable part of their touring routine. "For the past couple of years, the most helpful thing someone could do was book us for a house concert," says David Wax, leader of the Boston folk troupe The David Wax Museum. Wax has been playing house shows since 2007, when he set up an event at his own house — having found he couldn't get a gig anywhere else in town.

These days, The David Wax Museum play about a quarter of their concerts at private residences. Admission is cheap or free, but Wax says the band usually makes up the difference in merchandise: "People always buy so much stuff because they're not paying a cover," he explains. Interest in these intimate shows has grown so much that Wax says the band can't possibly honor every request. "At first, it was the only way we were able to get by," he says. "We have to turn some of them down now. They're just overflowing with people."

And that's just one way the profitability of house shows can be limited by the houses themselves. Only so many people can squeeze into a living room before it becomes a safety hazard. Paradoxically, organizers who want to attract new and different audiences have to keep the bar for entry low — that means keeping cover charges modest, often using a suggested donation or tip jar model.

There is, however, a small subset of independent bookers who can always pay their talent handsomely: students. Colleges and universities across the country offer on-campus concerts during the school year, many of which are booked and produced by student activities committees. College gigs aren't always easy to get, but financially, they're one of the safest bets a rising band can make.

That's mainly because colleges have a different bottom line than traditional venues. A rock club's continued existence is dependent on its nightly take from the door. Bands are generally paid a cut of that total — the exact percentage is up to the venue, and guarantees are few and far between. Conversely, most colleges offer just a handful of concerts each year, and cover costs with an activities fee that's built into every student's tuition. For the artists, that usually translates to payment in the form of a guaranteed flat sum.

College audiences tend to be captive ones. If you're under 21, don't have a car, and attend school anywhere but the handful of cities that bands regularly tour through, campus concerts may be your only option for non-a cappella entertainment. Booking committees balance their own tastes with popular request, and cross-pollination is common. In 2008, Brown University had Vampire Weekend, then a newly signed buzz band with a lot to prove, open for rapper Lupe Fiasco, thus exposing each one's fans to the other.

College shows can also help touring artists to bridge gaps in their schedules. Between gas, lodging, and time off from day jobs, every day on tour carries a price tag — and every night without a paying gig means no income to balance the loss.

"A lot of times, if a band is playing in Chicago or Minneapolis or even St. Louis or Kansas City on Friday, we can get them playing Grinnell on Saturday," says Nick Wilson, a senior at Iowa's Grinnell College who currently heads the school's concerts committee. "For bands on tour, it's a good way to fill a night."

While some acts can put a lot of eggs in the college basket — Ben Folds, for example, has played a handful of headlining tours exclusively on college campuses — there are only so many dates to go around. For those who can't make their living rocking the quad, there's always the living room. According to David Wax, the biggest payoff from independently booked shows is the personal investment organizers make.

"It's one thing to invite people out to a concert — it's another to say, 'This is a band I love so much that I'm having them play at my house,'" says Wax. "It doesn't take that many people getting together to make it extremely valuable to the artist."