Accessibility links
Pinetop Perkins, Blues Pianist, Dies At 97 : The Record He was one of the last original performers of Delta blues and the oldest person to win a Grammy. 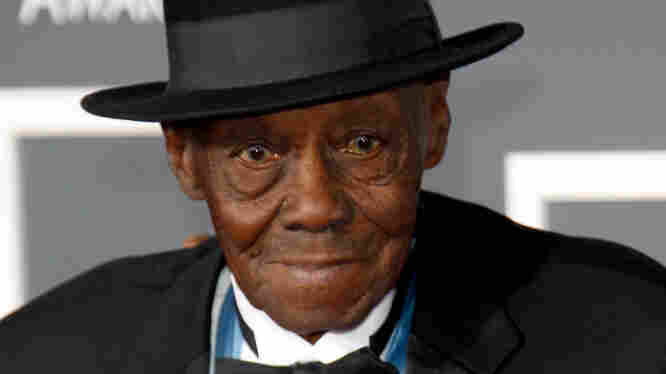 Singer Pinetop Perkins at the 2011 Grammys in February. His win that night, in the category of Best Traditional Blues Album, made him the oldest person to ever win a Grammy. Dan MacMedan/WireImage hide caption

The last member of an influential era of blues music has died. Pianist Pinetop Perkins was 97 years old when he suffered cardiac arrest at his home in Austin, Texas. He was one of the oldest performers of the Delta blues, and the oldest person to receive a Grammy award, just this past February.

Until the day he died, Perkins got to do what he loved most, play the piano. In the 1950s, Perkins earned his nickname for a recording he made of "Pinetop's Boogie Woogie," written by Pinetop Smith. After touring with blues guitarist Earl Hooker in the late '50s, Perkins was picked to play in the Muddy Waters band. He stayed for over a decade. Perkins, who had called Austin, Texas his home for the last 25 years, continued to perform live — he had tour dates booked through this spring.