Accessibility links
SXSW Wrap Up: For Bands, Was Austin Worth The Trip? : The Record It's expensive to get to and hard to stand out once you're there, but SXSW offers exposure that's hard to resist. 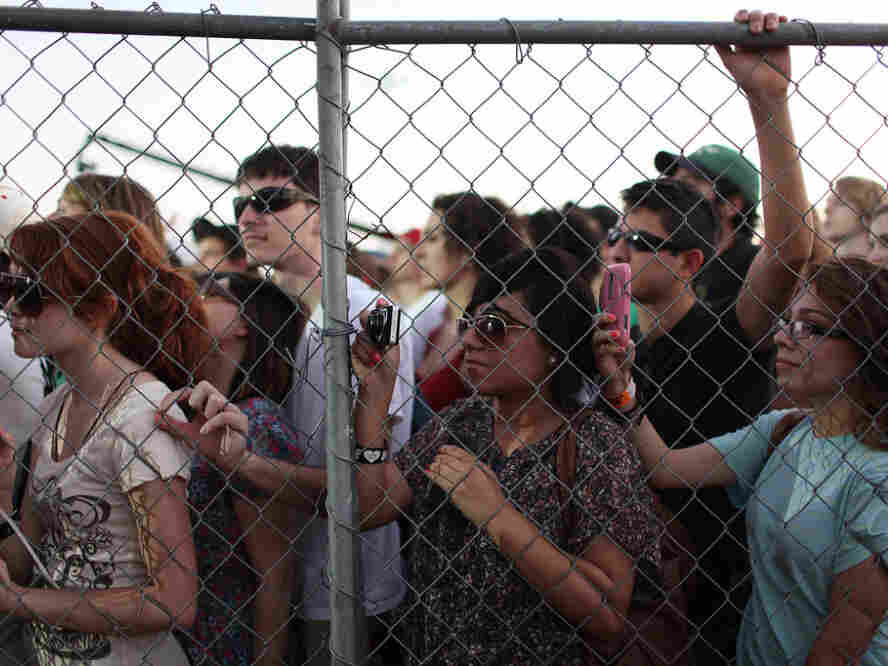 The crowd at a Bright Eyes show at Auditorium Shores at SXSW 2011. Katie Hayes Luke for NPR hide caption 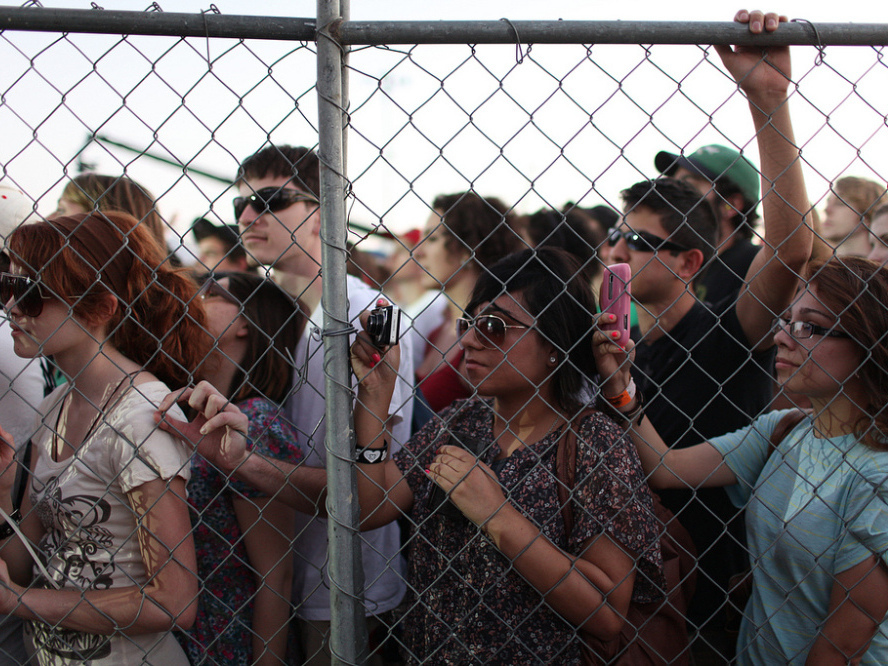 The crowd at a Bright Eyes show at Auditorium Shores at SXSW 2011.

The 25th annual South by Southwest Music Conference is over, and many a sigh of relief has been heaved. It was the biggest SXSW ever, and downtown Austin rocked for five days. The whole city felt like one big crowded bar. Revelers like Mathew Oats, who just moved to Austin, staggered down the street soaking up the music coming out of every door and window.

"We're trying not to pay anything to have a good time," Oats says. "It is very easy to do."

But if you're an independent musician who had to get all of your equipment and band members to Austin, you may just be waking up with a hangover and a sense that the festival might no longer be worth the effort. Nick Stetz, who was at SXSW playing drums with Canadian Leeroy Stagger, has been going to the conference for five years. "It seems like every year it's, like, harder and harder," Stetz laments. "You know, there's more hoops to jump through. It seems weird that, like, the bigger bands get more than one showcase."

Stetz is referring to the official SXSW "showcase" concerts. It wasn't that way back in 1987 when there were 170 bands, and about 700 people came to hear them. This year there were 2,400 official performers and 36,000 attendees with admission badges and wristbands — and that doesn't count the number of unofficial bands that played on the streets and in small venues.

Steve Knutson, general manager for North America for the independent label Rough Trade (and a former exec at Tommy Boy) did the cost benefit analysis. "There's so much stuff to wade through that it's difficult, if you are an artist, to have a presence here where you rise above the din," he says. So Knutson took The Strokes to Austin (the band has its first new album in five years — one that's getting decidedly mixed reviews) but told several of his other acts to stay home.

"I'm so apprehensive about actually finally being here," says Adam Cohen, son of Leonard Cohen. It was his first visit to SXSW — at the festival's invitation — with his band Low Millions.

"It's either the mark of my career having gone so dreadfully poorly that I'm finally here, or I don't know. I'm not very happy to be here," Cohen says morosely (he is Leonard's son, after all).

Cohen says even if you do rise above the din at SXSW, the traditional record industry is in such decline that it's unlikely anyone will offer you a deal. He should know a thing or two about that — at one point or another, he's been signed to Columbia, Capitol and Manhattan. (After this story was published, Cohen reported that his SXSW hadn't been all bad. See update below)

At a time when few artists are making money selling records, performing has become more important than ever. Adam Woodard, of the unsigned band Star & Micey from Memphis, says he has met a lot of club owners looking to book acts.

"I don't think it's so much about the label as if, you know, you meet that one guy from England who owns that club; that he sees you and he just falls in love with you and he's willing to buy some tickets to fly out there to play," Woodard says. And it's not like SXSW has ever really attracted the most pragmatic people. Johnny Z came down from Chicago with his band The Sunshine Elsewhere.

And if that doesn't get you a deal or a gig, even the grumblers had to admit they had a little fun being around so many people who love and play music.

Update (3/22/11): Adam Cohen got in touch with us to say that despite his fear that Low Millions would get lost among the thousand of artists vying for attention at SXSW, the festival was good for the band.

After playing a showcase at SXSW, Cohen says he was offered several record contracts. He didn't say which labels, but he insisted there was a bidding war going on between executives over his band. He says he even met a film maker who wants to do a documentary about Low Millions. Cohen told NPR he was feeling a bit foolish about his earlier remarks.

The question that Cohen raised before his performance about what it even means to be signed these days still remains (his debut came out on Columbia and the two followups on divisions of Capitol). Record sales continue to decline and, as Cohen put it in our earlier story, "there's no more gold bullion....you're trying to make a fast buck in the slow lane."

Cohen also pointed out that all he has right now are offers. He's still waiting to see if they have any bullion attached.