Accessibility links
Dave Grohl: How To Make An Arena Feel Like A Punk Club : The Record The Foo Fighters singer talks about seeing his first live show and what he learned from Freddie Mercury. 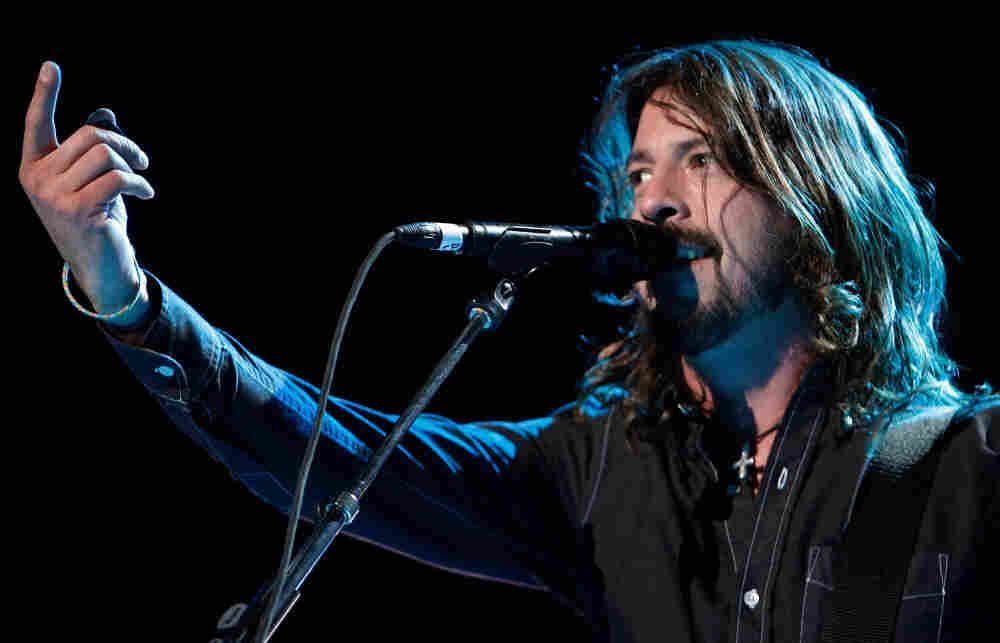 Dave Grohl on stage with the Foo Fighters at the Grammy Awards in 2008. "The first time I ever went to a big concert it freaked me out," Grohl says. "[I thought,] this is insane." Frazer Harrison/Getty Images hide caption

Dave Grohl still remembers the first time he saw a band play live music. It was the summer of 1982, and the thirteen-year-old Grohl was visiting family in Chicago from his home in the suburbs of Washington, D.C.

"We drove up there and my cousin Tracy had turned punk rock," he says. "And she said, 'I'm going to this show tonight. Come with me.' And so I went to this club called The Cubby Bear – it's right across the street from the baseball stadium – and a band called Naked Raygun were playing, and they're this legendary Chicago punk rock band. But I'd never seen live music. So my introduction to rock and roll was in a club that held about 150 people that was half full and I was belly up against the stage watching this incredible live band, like, sweat and spit and bleed in front of me."

"The first time I ever went to a big concert it freaked me out," Grohl says. "It was a monsters of rock tour featuring Dokken, The Scorpions, and Van Halen." The first thing he noticed, from the cheap seats, was the lag between the action he had to squint to see on stage and what his ears were telling him. "I was watching the drummer and the sound [was] taking three seconds to get to me. [I thought,] 'This is insane.'"

Those two shows could as well be the poles between which Grohl's career has vibrated — an obsession with live music rooted in D.C's intense punk scene that has led to a career playing in front of enormous audiences as the drummer for Nirvana, and – for the last 16 years – as the lead singer of Foo Fighters.

For the young Grohl, weaned on punk's intimacy, big shows were dealbreakers: a dilution of the club experience with an enforced distance between the band and its audience. Today, with the seventh Foo Fighters album, Wasting Light, out next week and an tour of arenas planned for the spring, he's come to terms with playing in huge venues. And he now concedes that some bands actually use the distance from the fans to their advantage.

"I think it really comes down to the band in that environment. Watching a band like Dokken – those guys in Dokken don't want to feel like normal dudes. They want to feel like rock gods. And so they're pushing you as far away as they can." For some fans, that's the very reason to go to a show. Then, he says, "There are some bands that can walk on stage and turn their back to the audience and make incredible music that people will remember for a lifetime. Those are few and far between."

Grohl says that for a band, big shows and small shows don't always feel different – what changes is the perspective of the musicians.

Not that the incongruity always works out for the band – or the audience.

Just a decade after he saw that show at The Cubby Bear, Grohl was on a stage in Sao Paolo, Brazil, playing a show with Nirvana that has become legendarily bad among fans of the band. "It couldn't have been more strange," Grohl says. "Kurt was playing drums. I was playing bass. Krist was playing a left handed guitar and we were trying to play 'Rio' by Duran Duran in front of 100,000 people."

It's the sort of thing, he says, that could have been perfect at a small club. "But at a big ... football stadium, it didn't go over. So there's times when it can get confused."

The key to success in any venue, Grohl says, is "breaking down that barrier" between fans and the band. Asked for an example, he says, "The bands that get up on stage and play like it's the last night of their lives are the ones I have a lot of respect for." But he takes the time to cite three particular performers who he says made performing in front of huge crowds into their own art forms: Freddie Mercury, Paul McCartney and Bruce Springsteen.

"Every band should study Queen at Live Aid," he says. "If you really feel like that barrier is gone, you become Freddie Mercury. I consider him the greatest frontman of all time. Like, it's funny – you'd imagine that Freddie was more than human, but ... You know how he controlled Wembley Stadium at Live Aid in 1985? He stood up there and did his vocal warm ups with the audience. Something that intimate, where they realize, 'Oh yeah, he's just a f***ing dude.'"

The key to McCartney's success, according to Grohl, is his ability to surprise an audience who might expect to see a rock god on stage. "Yeah, he's a Beatle, but you kinda get that feeling that he's singing to you," Grohl says. "You're so connected to those songs and he's such a decent, real human being."

"Bruce Springsteen had a quote – I can't remember exactly what it was – but the idea was for the audience to look at you and find themselves in you. And that's what draws them closer to the music."

So how do Grohl and his Foo Fighters plan to draw in the tens of thousands who will see them play at shows this summer?

"I write big choruses, because I want to hear 80,000 people sing [along with the song] for 80,000 different reasons," he says. "It's important to me that people feel connected to the band through the music, you know? I don't want it to be wallpaper. I don't want it to be background music. I want it to be clear: This is the song. These are the words. If you feel the same way as I do, sing it as loud as you can."

If stocking the set with material that fans can relate to isn't enough, Grohl says that he's not ashamed to simply ask for an audience's love.

"I drink a lot of beer and I run out into the middle of the audience and I yell out, 'lemme f***ing hear it.' This song is called 'My Hero.' And those people sing 'My Hero.' ... I don't put on makeup. I don't wear anything fancy. I don't use any computers. I just bring my instrument out into the middle of those people and get them to sing the song with me."