Accessibility links
Singled Out: DJ Quik's 'Luv Of My Life' : The Record The elder statesman of West Coast rap says his new single is punchlines and fun. Don't overthink it.

Luv of My Life

Singled Out: DJ Quik's 'Luv Of My Life' 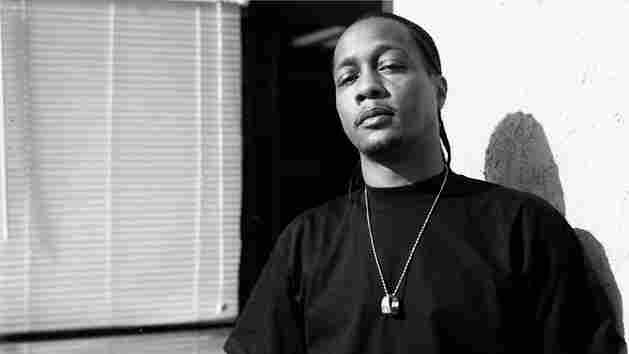 DJ Quik is an elder statesman of the West Coast rap scene. He dropped his first album, Quik Is The Name, in 1991 and set the tone for much of gangsta rap made in California that decade with his allegiance to Roger Troutman-style talkbox and Parliament Funkadelic samples. Since his debut, he's released eight more albums and produced tracks for 2Pac's album All Eyez On Me and Snoop Dogg's Ego Trippin' (with Teddy Riley and Snoop), and two years ago collaborated with Kurupt on BlaQKout.

The man still loves '70s funk and R&B. He says his latest album, which will be released next week, called The Book Of David, is "really honest" and the first single, "Luv Of My Life," is "not to be overthought." He says it's punchlines and fun. To make it, he relied on the same company's drum machines that have been the standard in rap music since the late '80s, Akai, and he's proud of the result.

He brought in Gift Reynolds, a rapper in his early twenties from the west side of Detroit to rhyme over the track. Gift says he was happy to work with Quik on "Luv Of My Life" in particular, because it sounds like the music Quik made back in the early '90s, the music he's still best known for.

Luv of My Life

How did this song come about?

We was just spending time in the studio about a month ago. Me and my brother G1 just started making the beat. I did the drums, he did the bass line. We did it in, like, 15 minutes. Just pretty much threw it together.

When you hear something that's new, and fresh, it makes you feel nostalgic.

What are the components to the song? How did you make it?

I use the MPC-3000 to produce still. The Akai drum machine is still the best ever. I use that and ProTools 8. I'm a real big fan of Native Instruments, Arduino, Sony Acid 6. All of those toys are just great, they're great DAW [digital audio workstations].

It's because all the soft samples [sounds offered to producers to edit through DAWs] now — it's going back to that retro sound. They're going back to that real '70s, '80s lush, brassy, stabby. It's pump your fist music again is what it is. It's like the '80s are back, and I love it.

How do you make it sound fresh now?

You just do it from an honest point of view, from right now. Nothing's new, I'm telling you. Everything that we're using has been used since the '70s. Michael Jackson was ahead of the curve. So was Marvin Gaye. [They both used] the Roland TR-808 drum machine on "Beat It" and "Sexual Healing," respectively.

With the title, are you referring to other hip-hop tracks like Erykah Badu's "Love Of My Life"?

Oh, you remember that record? Yeah! Erykah Badu is crazy. I love her. Maybe I am! Maybe it was a subconscious bite!

How does this track fit into the rest of your album?

It's kind of a standout because of how organic it was. My album is a masterpiece. It's thought-intensive, and it's honest. It's really honest.

We're having fun. I'm real materialistic. I'm making fun of what other people think the love of their life really is. Everybody thinks, 'Oh, this man. I just met this man.' Or, 'This woman.' It really is just what you like, or what you desire. Right now, I'm into cars and clothing and watches and stuff like that. It has nothing to do with my age. I've felt like this since I was 15. Same thing. I'd rather call it stages.

The record is funky, it's fun. Easy to perform. The video is dumb hot. I'm really proud of what we're doing right now. I'm not being arrogant about it, it's just that we've just done a good project, we're really proud of it and we're gonna see it all the way to the end.

How do you want people to listen to "Luv Of My Life"?

I want people to dance to it. It's a dance record. It's a groovy record that you feel. I've got smart keyboard players. It's not to be overthought. Just listen to the lyrics — punchlines and it's fun.

Who is the rapper on this track?

This kid's name is Gift Reynolds. He's an artist from Detroit. He's just a cool kid that has the tenacity [you need] for rap. He's actually right here with me, you want to talk to him?

Yes! How did you hook up with Quik for this track?

I linked up with him through our managers — they're good friends. He heard what I can do and that was that. [As far as this track,] it was overall good music, just the whole vibe. The structure of the song and how it was composed as a whole, it really caught my attention. To me, it was that DJ Quik that I grew up on.

How did you write your verses?

Off the head. I really don't use paper or a pen. I come from the heart. When you speak from the heart it's easier to make music that way. When you trying to write down stuff that you know that you're not used to doing, it's harder to make good music.

Were you referring to the Erykah Badu track with your verses?