Accessibility links
Gold Panda: Breaking Down Found Sound : The Record The British producer tells us the stories behind every little sample he used to make his song "You." 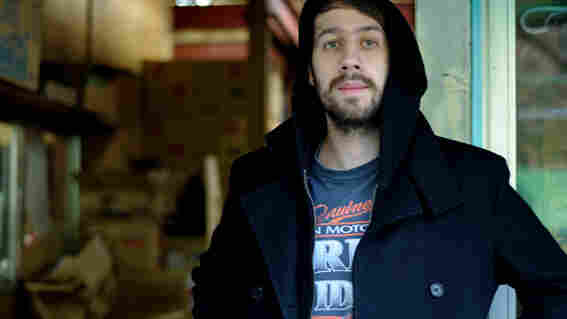 When I first encountered the music of British producer Gold Panda on an episode of All Songs Considered, I loved what I heard. However, I had little to no idea what I was hearing or where the sounds came from. When it comes to electronic music, that can be a barrier to entry for some listeners. Without the usual visual cues of traditional Western music (a guitarist strumming a chord, say), it can be a challenge to think of the person behind a laptop pushing various buttons and turning assorted knobs as a "musician."

With this mystery in mind, I invited Derwin Panda, a.k.a. Gold Panda, to NPR to deconstruct a song – any song — from his debut album, Lucky Shiner. Panda chose his hypnotic single, "You," and with just his laptop and a sequencer, he broke the song down into its component parts. To hear what Panda's talking about, listen to the story at the top of this post.

Panda says he found the sample that forms the bedrock of "You" on an old Indian record at a used record store.

"There's always interesting stuff there," he says. "I tend to go for stuff with strange covers or anything with an Asian or Arabic script... [I]t's also quite exciting because you don't know what you're getting."

From there, he found "a nice vocal with a lot of space" and played with its pitch until he settled on a sound he liked. Though it sounds like the voice says "you" and "me," Panda says that's just how English-speakers hear it, as the original vocal was in another language. Panda says he also pitched down another sample from the same record to use as the bass line.

Percussion is where Panda really started to surprise me. A loop of maraca-like sounds was pulled from an old Mexican record also purchased from a thrift store. When he isolated what sounded like a bass and snare drum, I discovered that it came not from a drum machine but from sped-up recordings of Panda himself beat-boxing into a Dictaphone. When slowed down, I could clearly hear that the sounds had come from a human mouth.

My favorite revelation was that the track's drum bursts were fireworks sampled from an old Japanese field recording. When Panda isolated and slowed the sample down, he revealed that it contained the sound of children laughing amidst the sound of celebratory explosions.

Panda says he likes to start with a blank page and find every sound himself. For that reason, he doesn't consider himself a DJ. He's not playing other people's music, but his own.

"I don't use any stock sounds," he says. "That's never really had any appeal to me, because I felt like I wasn't doing any work. These sounds didn't mean anything to me. They were just sounds that someone else had compiled."