Accessibility links
The Complexity Of Pop: Beyonce, Gaga And tUnE-yArDs : The Record New songs from Beyonce and Lady Gaga pit the singers against music packed full of sound effects in a dance that sometimes turns into a fight.

The Complexity Of Pop: Beyonce, Gaga And tUnE-yArDs

The Complexity Of Pop: Beyonce, Gaga And tUnE-yArDs 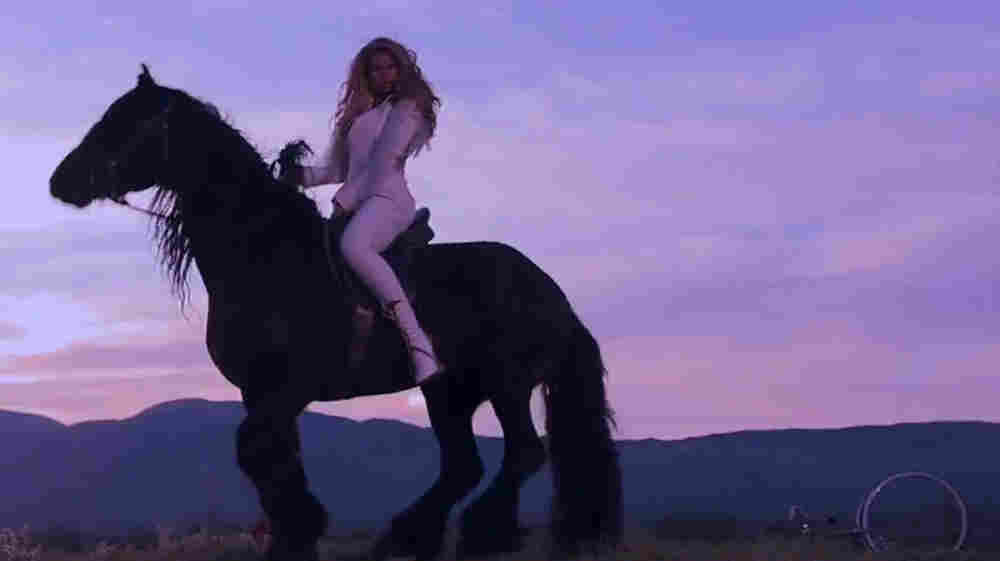 A shot from the video for Beyonce's "Run The World (Girls)". Courtesy of Columbia Records hide caption

It's been noisy lately on the pop scene. Lady Gaga and Beyonce just dropped new singles, KABOOM. And on the indie front, Merrill Garbus of tUnE-yArDs released her second album, an early contender for best-reviewed album of 2011. That all of these bold moves come from women may or may not be incidental, but — way to take the focus off Rebecca Black, homegirls!

Gaga's "Judas," Beyonce's "Run The World (Girls)," and Garbus's magnificent w h o k i l l are obviously very different entities. But they all share what Village Voice music editor Maura Johnston smartly identified in a short piece on the Beyonce track as a certain overloaded quality – a chopped-screwed-cut-pasted-remixed-remodeled hyperactivity that reflects both this musical moment and the culture's general mood. And something else unites them: the thrill of hearing a human voice constitute itself within the cacophony.

Musically, these releases are just part of the ongoing transformation of narrative song structure under the sway of electronically-based dance and hip hop music. This isn't news. Pop divas have been raiding Clubland's labs forever, and left-field songsmiths like Garbus have done the same, somewhat differently (cf. Laurie Anderson or mid-period Talking Heads, or more recently Animal Collective and Dirty Projectors).

To my ears, each of these new releases reenacts a similar struggle between a quirky individual and the devices designed to enhance, but also control, her voice. (Yes, you could throw in the club bangers on Britney Spears' new Femme Fatale, if you wanted – her method is a sneaky passivity, as she lets her producers automate her.) This is how individual expression survives and thrives on the electronic frontier: through a dance with machines that sometimes turns into a fight.

Gaga's the dominating type. On "Judas," produced by her longtime collaborator RedOne, she wails and intones and mimics her own previous phonetics on "Bad Romance," going for a theatrical tour de force. She plays around with Rihanna patois on the verses and Madonna's Fauxbridge accent on the break. Her solution to the dominance of electronics is to prove herself a better machine, and her vocal approach is a little bit like her dancing: deliberately robotic, playing up the artifice.

Beyonce loves her own fleshiness too much to go that route. "Run The World (Girls)" is getting dissed for being too scattershot and derivative, and it's too early to tell whether it'll be a hit. But I like it, just for the chance to hear pop's fiercest singing battle rhymer duking it out in the video-game atmosphere created by producers Diplo and Switch. If Spears can imagine herself a fembot, and Gaga grasps what it means to be truly cyborgian, Beyonce still prefers action-movie scenarios: Attack of the 50 Foot Woman meets Crouching Tiger, Hidden Dragon.

These mainstream artists seem strangely adversarial in their relationship to the music that encroaches upon their voices. Garbus, conversely, cultivates a beautiful relationship with the sounds she coaxes from her array of tools, which include both ukulele and drum machines. Maybe because she produces her music herself in collaboration with friends who aren't hit-factory professionals Garbus feels much more in control of the wild atmosphere she conjures. She wants to know what it means to coexist with all this noise: how to meet it halfway.

All this stuff is intense on the ears; it might be nice to end the week with a quieter effort. Working in a vein that connects to jazz and folk, Becca Stevens – previously best known as the main voice in Travis Sullivan's Bjorkestra – has made a lovely new album called Weightless that takes a more subtle approach to the subject of our distractingly noisy world. Let's go out on one of her tracks. Stimulating, but leaving space to think, it'll ease us out of this week of noise into a potentially more peaceful weekend.