Accessibility links
Download Sales: Will Money Stay With Labels Or Go To Musicians? : The Record If recent lawsuits change the rules, older musicians will make much more money from digital sales. 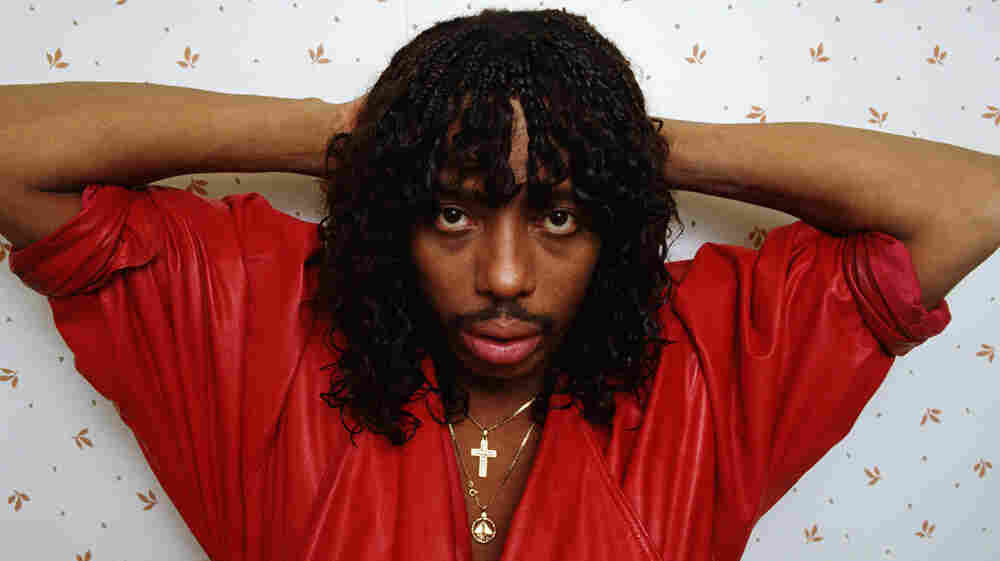 Rick James poses West Hollywood, Calif., in 1987. He died in 2004, but his estate is suing his label for royalties it says he's owed for digital sales. George Rose/Getty Images hide caption

A recent move by the Supreme Court could mean millions of dollars in additional royalty payments for older musicians who signed contracts before the digital era.

Like Rick James. The funk musician died in 2004. But that hasn't stopped James' estate from suing his record label, Universal Music Group, for unpaid royalties from digital downloads.

The case boils down to a very specific legal distinction: the difference between a sale and a license. If you're an artist, you generally get around 15% of the proceeds from the sale of a CD, while your record label keeps the rest. But if you license a song –- say to a TV commercial or a movie –- you're entitled to a 50/50 split with your label.

"I believe the artists are being unfairly short-changed," says Jeff Jampol, manager of the James estate. To understand his lawsuit, it helps to start with a similar case filed against the same record label. The plaintiff was FBT Productions, the producers who discovered Eminem before the rapper went on to sell more than 5 million digital downloads, the most ever.

Five years ago, Eminem's former producers sued Universal for unpaid royalties. Eminem's producers argued that a digital download is more like a license than a sale. Their lawyer, Richard Busch, explains why.

"Where a label is selling a record, they have incremental costs. They have a cost for each CD, for the packaging, for the distribution," Busch says. "Those incremental costs just simply are not present when they just send a master to a third party."

So when a third party like iTunes sells a digital download, it's selling a copy of the track that the record label licensed it to make. Busch argued that FBT and Eminem should get a 50/50 split on royalties from downloads. And a federal appeals court agreed. In March, the U.S. Supreme Court denied Universal's appeal. A spokesman for Universal declined to be interviewed for this story. But in a statement, he says the case is only about one agreement with one artist, and "does not create any legal precedent."

Jampol calls that "balderdash" (his word). The manager for Rick James' estate thinks the Eminem ruling has wide implications.

"It's very clear to me that downloads are a license," Jampol says. "And a download calls for a payment that's much more than a sale."

Jampol's lawsuit is seeking class action status for James and other artists — something Universal says in another statement it will oppose "vigorously." Recording contracts are rarely made public, so it's hard to say exactly how many artists might have a similar case. And many record labels changed their contracts in the mid- to late-1990s precisely to avoid this issue. But that still leaves plenty of music recorded before the age of digital downloads.

"It's the older artists who are at the heart of this issue," according to Glenn Peoples, an editorial analyst at Billboard. "It's about interpreting old contracts. And I imagine there are a lot of artists who might want to try that in the court, and see how the court interprets these contracts."

This could be a big problem for record labels. Catalogue sales are one of the healthier parts of an ailing music business. Last year they accounted for nearly half of all digital sales. In some cases, record labels have renegotiated old contracts with their biggest sellers. But others, like the Allman Brothers Band, have sued for unpaid digital royalties.

So let's take a $0.99 iTunes transaction. Deals vary, but let's just say a label gets half of that after iTunes, Paypal and whoever else gets a cut. Let's call that $0.50 to be split between an artist and the label. Using the 15/85% vs. 50/50% formula, the difference to the artist between calling the transaction a "sale" or the result of a "license" is a difference between 7.5 cents and 25 cents, per download.

So even smaller sellers may find there's a lot of money at stake.

Today Sam Moore is 75 years old and lives in Arizona. Joyce Moore says his union pension does not pay all the bills. "For somebody that's on a fixed income, that's in his 70s, that's never had good royalties — it's life-changing money."

Hold on, it may be coming. And that's exactly what Universal and the other major record labels seem to be worried about.