Accessibility links
Eddie Vedder Talks About His 'Ukulele Songs' : The Record Pearl Jam's lead singer wrote the songs for a new album by himself over the last two decades.

Eddie Vedder On Giving The Ukulele A Turn In The Spotlight

Eddie Vedder On Giving The Ukulele A Turn In The Spotlight 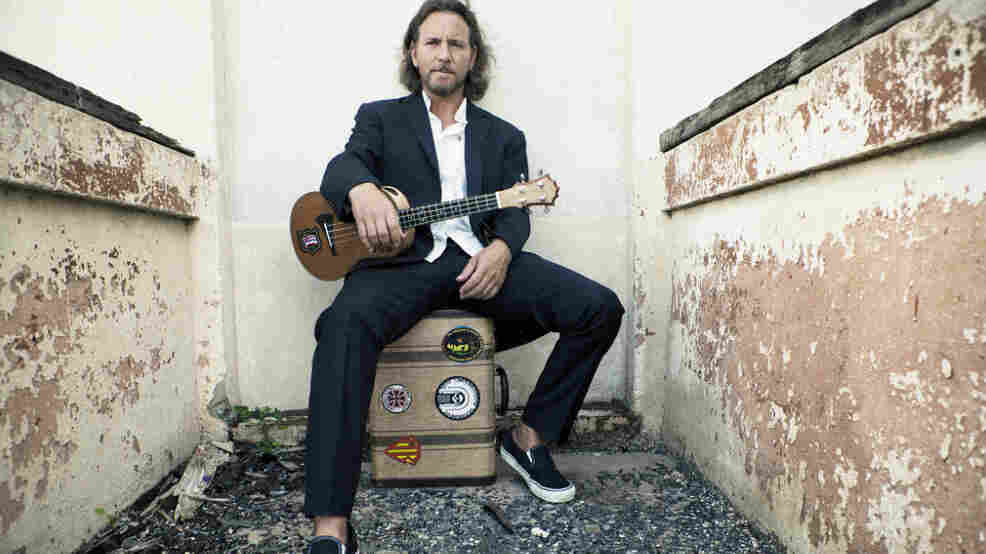 "It's an activist instrument," declared Eddie Vedder last week, speaking by phone from a Seattle recording studio. He wasn't talking about the Fender electric he once decorated in tribute to the late radical historian Howard Zinn, or any of the fascist-killing machines he's wielded in two decades worth of playing with Pearl Jam.

The singer and songwriter meant the ukulele, which he picked up in a Hawaiian convenience store in the mid-1990s as a traveling companion and songwriting tool. The soulful muse of his long-in-the-making second solo album, Ukulele Songs, is an instant community-builder.

Vedder, an incurably effusive anecdotist, had a story ready to make his point.

"I'll never forget, we were sitting around a campfire late at night," he said, not specifying the location of this particular clambake. "One of the locals was a fisherman I'd met before, and we got into a serious discussion about environmental issues. And then after that talk was over, some instruments started getting passed around.

"There were a couple of musicians in the group; a Brazilian guitarist, and then me... and this fisherman, his name was Eddie too, but that's where the similarities ended. He's maybe 60, 65, but could easily arm-wrestle me to the ground. He'd lived off the land and sea for probably his whole life. He picked up the ukulele.

"His hands were so big it was hard to imagine he could get chords out of it. And he played the most beautiful rendition of 'I Can't Help Falling in Love With You.' Elvis. You would have never known. So it's like, imagine the possibilities with that little instrument!"

Vedder said he hopes that Ukulele Songs would encourage listeners to step away from their computers and televisions and make some music of their own, preferably with friends. Some of the material collected on the record was written back in the mid-'90s after Vedder first picked up the instrument. For him, the modest chordophone itself has been a companion in times of loneliness.

"If it weren't for the ukulele I would have been by myself," he says of the period. "The songs were just written for my own benefit."

Indeed, Ukulele Songs is a very personal collection — an arc of mostly love songs — dedicated to his wife, Jill McCormick, and their two daughters, Olivia and Harper Moon. Though the famously self-protective rocker declares that all the songs are "works of fiction," the more private writing process has led to a set of tracks that are more revealing, frank and sweeter than his usual output.

"The song selection was easy because those were the ones I had," said Vedder. "A lot's different since I first picked up this instrument; my life is quite different than I could have imagined."

With Pearl Jam, Vedder helped invent the sound of millennial hard rock – an open marriage between punk, heavy metal and campfire folk songs that edged toward classic rock, partly because of Vedder's active engagement with influences like The Who and Bruce Springsteen. Also a leader when it comes to progressive social activism and ethical music business practices, Pearl Jam now defines what it means to be a fully grown rock band, still kicking as many of their peers flounder or find a spot on the nostalgia circuit.

The band celebrates its 20th anniversary this year with a Labor Day music festival in Wisconsin, a documentary directed by longtime pal Cameron Crowe, a book and a series of album reissues. Ukulele Songs isn't officially part of this commemorative process. Yet because it features material written over more than a decade of the band's life, including the driving "Can't Keep," which also appears on Pearl Jam's 2002 album Riot Act, Vedder's album presents itself as part of the band's history – the anima to the group's noisy animus.

Vedder has used the uke to provide counterpoint during encores on Pearl Jam tours and on the solo tour he embarked upon in 2008. He noted that it's great for stimulating sing-alongs. "It's such a small instrument," he said. "People are like, 'Let's help it out!'"

The uke's inherent modesty may be one part of its appeal to Vedder, who feels the weight of his fans' ardent devotion and has worked hard to live a responsible version of the rock star life.

"I think for some reason it might be more difficult to tell a story in a band song," said Vedder. "Every time we accomplish that, the outcome seems to be positive, in terms of how it connects to people who hear it. This, there's so much room for it."

Jake Shimabukuro, the leading young virtuoso of the instrument, suggested in an email that the instrument's humble nature might be one reason stars like Vedder, Taylor Swift and Zooey Deschanel find it so attractive.

"I love that people don't take the instrument seriously," wrote Shimabukuro, who himself is known for kicking out major jams. "In fact, one of the best things about being a touring ukulele player is that audiences all over the world have such low expectations of the music. The ukulele is one of the easiest instruments to play, and you don't have to be a musician to play it."

Vedder, who played a variety of ukes on the album, values it as a fount of melody. He finds his inner crooner on originals like the yearning "Longing To Belong" and choice covers, including duets with Glen Hansard of the Frames and Chan Marshall, aka Cat Power. (In the past, he's also performed "Tonight You Belong To Me," the flapper-era tune he shares with Marshall, with Portland's all-star drummer Janet Weiss.)

The range of emotion Vedder expresses on Ukulele Songs, which he co-produced with longtime Pearl Jam associate Adam Kasper, proves that for him, this outing is not just a novelty. Some, like the bereft "Sleeping By Myself," bear lyrics as dark as any Pearl Jam demon-freer.

"It is a happy sound, and by using it to process some emotions that were less than joyful, it somehow balanced it out to where it didn't sound like suicide music," he said.

From devastating heartache to the hope he feels when he looks at his two daughters, Vedder has uncovered an impressive range of feeling while strumming the instrument he considers a lifelong friend. He'll take it on another solo tour this summer before rejoining Pearl Jam for some fall dates. And he hopes to get people singing.

"I know for the vinyl version of the record there's going to be a real book included, with the music and the notation and whatever bizarre chords I've come up with — a legible version of the notebook I was creating all those years," he said. "I'm just encouraging people to turn off the TV and play these songs if you want. Some of them are really depressing. But have fun with it."