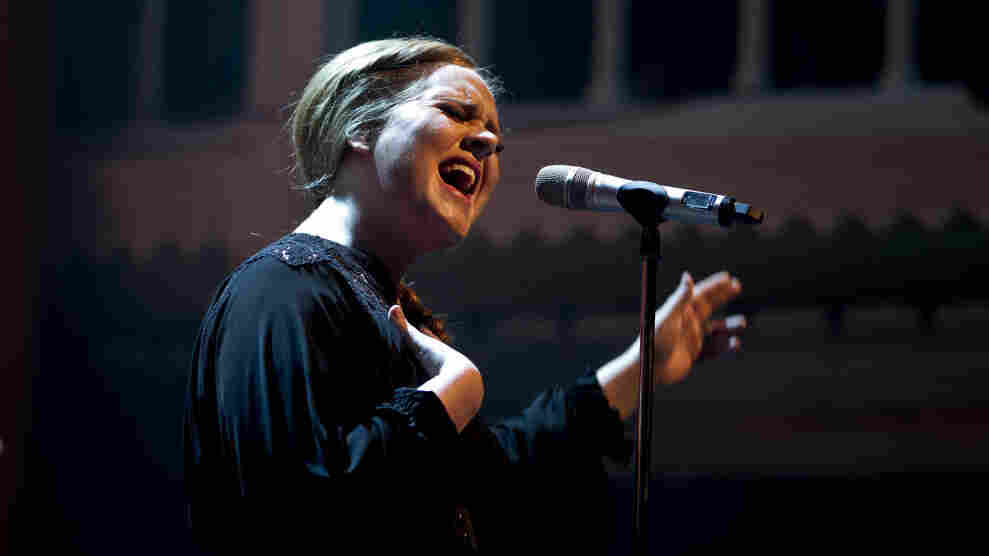 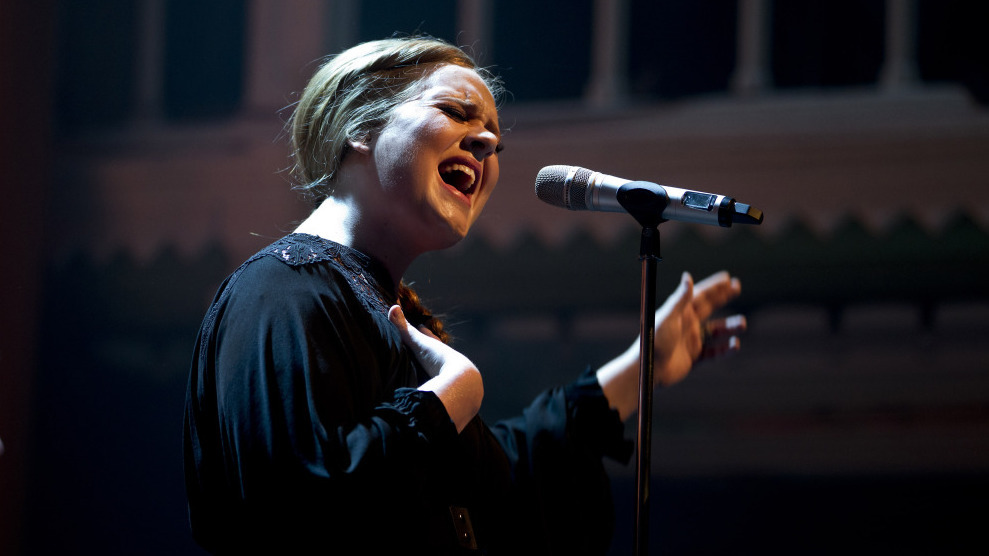 Adele on stage in Amsterdam in April.

For months now Adele has remained at or near the center of my thoughts, as she has for many people preoccupied with reading pop charts like tea leaves. Mostly, I've been enjoying her. The English belter's smash second album 21 sounds great in most circumstances, from morning coffee to afternoon drive to late-night glass of Rioja, and I doubt that that anything from the year's second half will beat the impeccable "Someone Like You" as my top song of 2011.

Funny in interviews, nonchalantly plus in size and just unbelievably gorgeous, Adele is the kind of famous person who makes being inundated with celebrity blah-blah-blah almost enjoyable. Wallowing in her success is delicious and seems nutritious, since she possesses the qualities virtually everyone appreciates in pop: emotional insight, high-voltage artistry, a gift for putting a glow on whatever you're doing when you hear her.

The other reason for me focusing on Adele is less fun: she's been anointed the latest savior of the music business and champion of a category I despise, "quality" music. Now that her sister Rose Red – that is, Lady Gaga — has finally ended Adele's months-long Billboard album charts reign, commentators have begun to line up behind one or the other.

As my esteemed colleague Maura Johnston has already noted in the Village Voice, this dichotomy is false and dull and disrespectful to both artists. Much more interesting, I think, are two other comparisons — one obvious and one less so, but perhaps even more relevant.

When her debut album 19 was released in 2008, critics wondered if she could live up to the legacy of a different It gal: Amy Winehouse. In that moment, it was Winehouse who seemed more "real" to many, partly because of the chemical imbalances that have long signified rawness in rock, but which eventually left the gifted "Back To Black" singer's career in tatters.

Yet maybe Winehouse won that moment's authenticity battle because she and her producer Mark Ronson so effectively invoked a different pop era, the Motown/Stax 1960s, while parodying the cultural signifiers of a different race. On her recordings and through an image that was trashier and more cartoonish than the elegant Adele's – performance studies scholar Daphne A. Brooks, in a powerful essay in The Nation, called her "Jolson in a dress" — Winehouse made blue-eyed soul that verged on minstrelsy.

Adele is a more tasteful borrower. Presented as a singer-songwriter's contemplative outing rather than a soul revivalist's party jam, 21 nonetheless borrows heavily from classic and contemporary rhythm and blues, from the gospel shout of "Rolling in the Deep" to "He Won't Go," which pays loving homage to Mary J. Blige. Adele has said that country music was a source of inspiration for this set of weepers, but the arrangements throughout, and especially her fascinatingly careful use of melisma and blue notes, remind listeners that Nashville is only two and a half hours' drive from Muscle Shoals, where Aretha found her voice.

What has changed in this version of blue-eyed soul is Adele's ability to comfortably inhabit an artistic persona that both crosses racial boundaries and remains apparently true to her own white English identity. Of course, there's historic precedent for this: not only Dusty Springfield, the greatest blue-eyed soul woman of all time, but other Brits like Annie Lennox (who redirected the focus away from her own racial crossings by being a gender-bender, too).

But Adele's interracial fluency also feels very of-the-moment in a pop world that has kept evolving toward a more international and openly racially diverse ideal, even since Winehouse's brief reign around 2008.

Call it blue-eyed soul in a brown-eyed world. Adele (whose own perfectly made-up peepers are a split-the-difference green) delivers her very personal yet highly crafted, star producer-assisted songs with the utter confidence of a young person who feels entitled to mine a musical legacy that she views as having emerged from a dialogue among artists of varying backgrounds.

Adele's work doesn't bear the mark of overcompensation or the awful bravado of the interloper. Is it because she's five years younger than Winehouse, who grew up in similar working-class circumstances? Or were her collaborators — super-savvy hitmakers like Ryan Tedder and Dan Wilson — simply smart enough to know that in the Obama era, the (however tenuous) assumption of racial harmony plays better than the boldness of racial transgression?

Whatever she thinks of the lineage she's upholding and from which she benefits, Adele's comfortable image is really much less like the nerve-wracking Lady Gaga's than like another very future-thinking current pop star: Bruno Mars, whose "The Lazy Song" is vying with "Rolling In the Deep" as song of the summer. Mars, a former child performer born in Hawaii to Puerto Rican and Filipino musician parents, owns any stage or studio he enters.

As a member of the writing and production team the Smeezingtons (which also includes Ari Levine, who's Jewish, and the African-American Philip Lawrence), Mars has been partially responsible not only for his various hits but for other amiably interracial chart-toppers like Cee Lo Green's "F— You," Travie McCoy's "Billionaire" and B.o.B.'s "Nothin' On You."

These songs are hard to categorize. "F— You" is retro soul with a rock edge; "Billionaire" is rap-reggae indebted to white groups like Sublime and No Doubt; "Nothin' On You" is a rap song based on a dreamy ambient keyboard line, a bit like the lite version of the work of the interracial pop pioneer Timbaland. There's a classic sheen to the Smeezingtons' music, but it's not connected to notions of raw authenticity — these young guys are way beyond thinking that's important. They know that in pop, craft is what's real: the dedication it takes to polish a lyric and a melody until it sparkles.

For all of their savvy about how ridiculous it is to try to fit someone else's idea of "real," both Adele and Bruno Mars do perform a different kind of spectacle. They both present themselves as older than their years. In this month's Vogue, Mars poses with Puerto Rican model Joan Smalls in a spread that perhaps inadvertently invokes Frank Sinatra's infamous Cuban idyll. (He's also made a really funny video for "Lazy Song" with Leonard Nimoy, playing very decrepit, as his doppelganger.)

Adele also happily takes on the stance of an older woman. Her world-weariness throughout 21 strikes a chord with many, but it could seem ridiculous to her when she's, say, 45. Either way, playing older is another way of playing deep. And it's a clever, if also completely sincere, way these youthful artists assume the privilege of speaking across the boundaries of time and race.