Accessibility links
Apple Announces iCloud Music Service : The Record Apple's cloud-based service tracks the music and other digital property on a listener's hard drive and makes it available wirelessly to devices that can connect to the Internet. iCloud, which arrives after a long negotiation with the major record labels, will be available for free this fall.

You can hear Laura Sydell, NPR's Digital Culture Reporter, talk to All Things Considered's Melissa Block about the announcement by clicking on the audio link above. 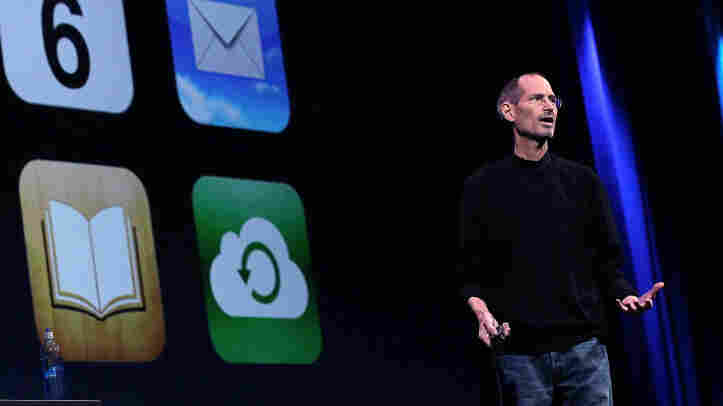 On Monday afternoon, Apple announced the introduction of iCloud, a music service that will allow users to listen to their music from almost any Internet-connected device. (Update at 4:30 p.m.: Initially we called Apple's service a streaming one. We're not sure exactly how iTunes Match will work, and we're getting in touch with Apple. We'll update again as soon as we hear back.)

Update at 5:58 p.m.: An Apple spokesperson says that iCloud and iTunes Match are not streaming services. Rather, they combine to offer what's essentially access to songs via a cloud-based locker not unlike Amazon's Cloud Drive. The major difference with Apple's service (apart from the price) is that you won't have to upload songs from your computer's hard drive if they're already available in the iTunes store. What does this mean if you've got a device — say a 32GB iPhone — with not enough storage space to accommodate the amount of music on your hard drive at home — let's say, just for argument's sake, 101.68GB? Language on Apple's website says iTunes Match offers "all the benefits of iTunes in the Cloud." The same limitations apply as well: because you won't be streaming the songs from iCloud, you'll have to manually manage the songs on your iPod or iPhone — that means downloading them individually — the same way you do now.

The service, which was introduced at Apple's Worldwide Developers Conference in San Francisco, will be available starting in the fall for users of Apple products who also upgrade to the company's latest operating system. Though iCloud itself will be free, to fully take advantage of the service, users will need to pay $24.99 per year for a service called iTunes Match that will scan their iTunes library and make their songs available to be streamed on any Apple device, as long as those songs happen to among the 18 million available from Apples iTunes store. Songs that aren't included in the store will have to be uploaded from users' hard drives.

A note on Apple's web page indicates that 5GB of storage will be offered to iCloud users for free. The service replaces Apple's previously available MobileMe service, which allowed users to store data and access email, calendar and contacts via a cloud. Subscribers to iCloud will have their E-books, photos and documents all backed up wirelessly and automatically. Purchased music, apps and books will not count toward the allotted storage.

It was a major announcement for the company. Consumers and industry watchers have been waiting for Apple to introduce a cloud-based service for streaming music for months, which put the company in an unusual position. Unlike the introduction of the iPod, which launched into a wide-open marketplace; or iTunes, the first major digital music store, Apple is ever so slightly behind the curve when it comes to cloud-based streaming systems. Amazon's cloud drive, which allows users to store their own media, including movies and music, was introduced in March. Google announced a similar service — Music Beta — last month.

As Laura Sydell explained on NPR this weekend, the big difference between iCloud and those two services is that Apple's cloud-based service won't just be what's known as a "locker." In those services, users upload their own files to off-site storage that can be accessed from multiple devices, where iCloud will scan a user's library and match her songs with identical versions stored on Apple's servers. (Identical being a somewhat flimsy word here – the version of the song will be the same, but not necessarily the quality. All of the songs stored on Apple's servers will be encoded at 256Kbps AAC files.)

The benefit of the matching for users, as Apple sees it, is that iCloud won't require them to upload songs to a locker, a process that could take hours or days depending on the number of songs uploaded. For record labels and musicians, there's another upside: because Apple will be able to track how many times each song in iTunes is streamed on a user's device, musicians and songwriters could be paid royalties.

That last part probably accounts for the lag between other cloud-based services and iCloud. Apple negotiated contracts with the four major record labels before introducing their service; a portion of the money subscribers pay to Apple will be funneled to labels, musicians and publishers based on how frequently their songs are streamed.

Questions remain after the presentation. Jobs didn't talk about the deals Apple hammered out with the record labels, so we have no idea how much labels and musicians will be paid for streaming royalties, if they'll get anything at all.

But maybe most important for all who have invested, from labels to consumers to the company itself: will Apple's dominance – iTunes is the largest music retailer in the world — be enough to compensate for the head start Amazon and Google have with their already operational systems?