Accessibility links
Bad Vibrations: Investigating Sound As Terror : The Record Steve Goodman, better known as the DJ Kode9 and the founder of the record label Hyperdub, is also a scholar and author. His book, Sonic Warfare, explores the use of sound as a weapon through history. 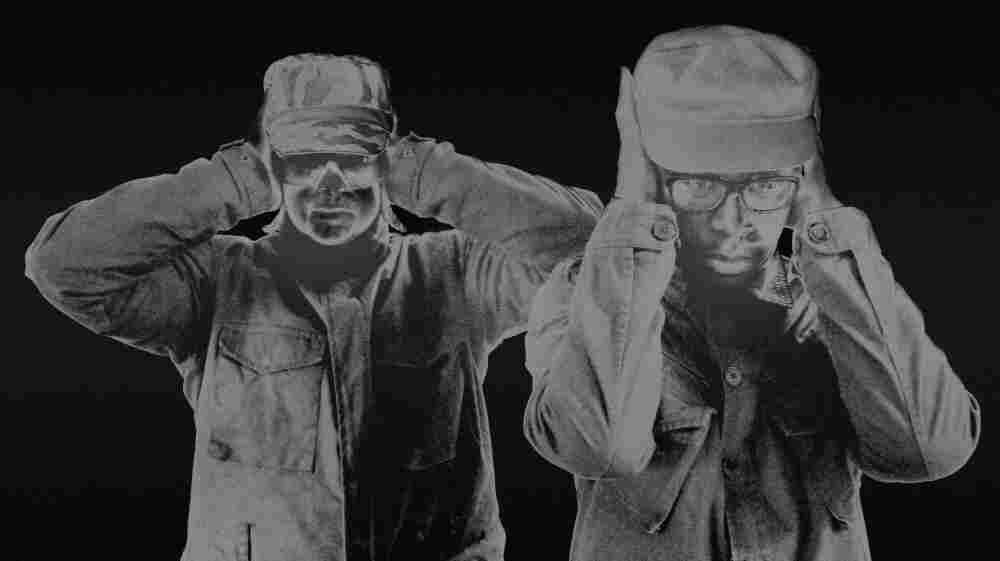 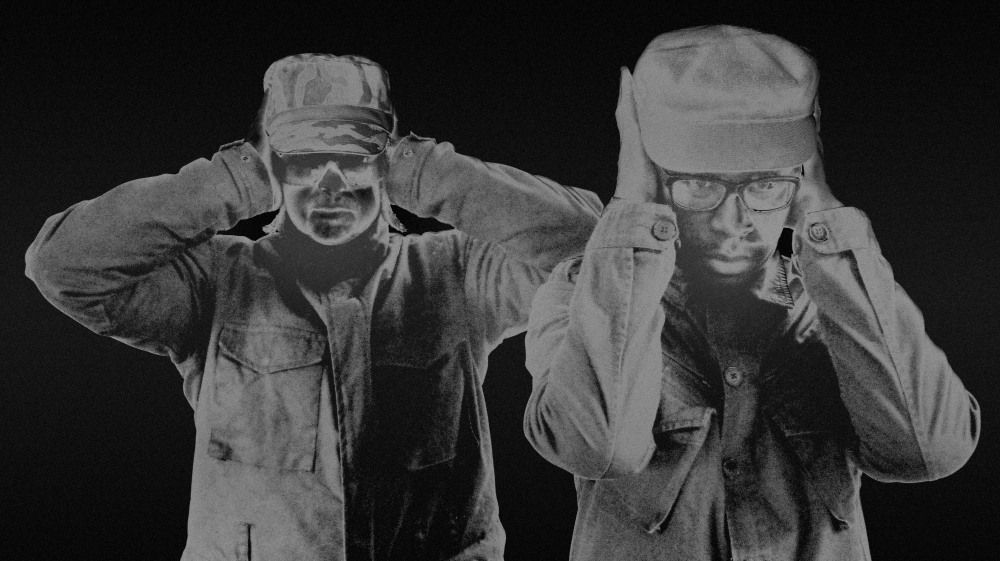 Steve Goodman, also known as Kode9, at left, with frequent collaborator The Spaceape.

I first heard of Steve Goodman as the head of Hyperdub, a London-based record label that has released work by avant-garde electronic artists like Burial, Joker and The Bug. But Goodman isn't your average label executive. He's a scholar, a lecturer at the University of East London and a musician who goes by the name Kode9. His new album, Black Sun, features rumbling bass lines under lyrics about a toxic world where a radioactive event has laid the land to waste. Goodman is also a DJ, and the time he has spent in the clubs of London during the last decade helped spark the global dance genre known as dubstep. But Goodman's interest in sound extends beyond the dance floor.

"From being a DJ and playing on various good and bad sound systems, I'm very aware of the fact that sound — and music — doesn't always create enjoyment and pleasure," Goodman says. "Actually, sound has a very special power of creating irritation and bad vibes."

As a scholar, Goodman studies the potential for music and sound to repel or harm listeners. On Friday, as part of a collective called AUDiNT (short for Audio Intelligence), Goodman will open an exhibition at the Art In General gallery in New York City called the Dead Record Office, which looks at various military uses of sound.

I met Goodman in a small apartment in Brooklyn, where he told me that he thinks of his work as a musician and his work as a scholar as being separate from one another but admits that elements from one inform the other. In 2009, MIT Press published his book Sonic Warfare.

"We look at everything, in the book, from the military using acoustic weaponry to the way sound is used in branding and advertising, to the way intense sound is used by various music cultures around the world to build collectivity," Goodman explains.

His work with AUDiNT looks at the way sound has been used to aid destruction. The group takes the detailed historical research of his scholarly work and dresses it as art. The Dead Record Office exhibition offers a peek into the group's work.

"What we're doing is tracing or mapping these three phases of the history of acoustic weaponry," Goodman says. "Firstly, starting with the Second World War, there was a division of the U.S. Army that was referred to as the Ghost Army. Part of what they were involved in was sonic deception, putting loud speakers in the battlefield to create a false impression. So we trace this from the Second World War to the U.S. Army in Vietnam, a division of psychological operations called Wandering Soul. This involved helicopter-mounted loudspeakers playing simulated Buddhist chants, fabricated sounds of the dead ancestors of the Viet Cong fighters speaking to them from the afterlife to try and persuade them to surrender."

The third phase is less psychological, looking at a sound's potential to be a more conventional weapon.

"What's starting to emerge now," Goodman says, "is the use of these ultrasound driven directional audio speakers." These speakers can actually rupture eardrums from a distance.

Despite such advances in sonic technology, the old psychological tactics are still being used. Toby Heys, a fellow researcher at AUDiNT, says the U.S. military's use of sound with prisoners at Guantanamo Bay has been well-documented.

"A lot of the detainees who were interviewed after their detainment have spoken about sonic torture as being the worst," Heys says. "Rather than the sexual humiliation, rather than the beatings, the worst thing that they went through was the sonic torture."

Nina Kraus, a neurobiologist at Northwestern University who studies the human auditory system, explains how sound triggers responses like fear in the human brain.

"We know that our auditory system has direct connections to our limbic system, which modulates emotions such as fear that will strengthen these neural circuits," Kraus says. She adds that those connections are unique to each individual, so no two people will hear a sound in exactly the same way. "You know, because of the experience that a person has had throughout their lives using sound, now when any sound occurs — and in this case emotionally salient sounds — then the nervous system will respond in a way that will particularly enhance the information bearing elements of the sound."

For a child raised in an urban environment, the sound of an ice cream truck might trigger a desire for sweets, while those who have never been around a vendor on wheels may find the looping melodies an annoyance. Heys says that the U.S. troops have employed an exaggerated version of this idea in Afghanistan.

Depending on your cultural experiences, the booming bass lines of Kode9's music may sound either threatening or inviting. But as Goodman says, that's exactly what interests him about sound.

"There's a political dimension to sound and music that people often ignore that I call in the first book the politics of frequency," he explains. "The way certain frequencies change the way you feel the way they resonate with different parts of your body, tapping into physiological and psychological dimensions of your experience. I'm looking to open up that other dimension, to get people thinking about music and sonic culture."

People often celebrate the healing power of music; it can distract us and put us at ease. But Goodman's work demonstrates that music can be something more than just a pleasantry, and that it's worth trying to understand the full scope of its power, even if it hurts.